Charlie Shavers was one of the great trumpeters to emerge during the swing era, a virtuoso with an open-minded and extroverted style along with a strong sense of humor. He originally played piano and banjo before switching to trumpet, and he developed very quickly.

In 1935, he was with Tiny Bradshaw's band and two years later he joined Lucky Millinder's big band. Soon afterward he became a key member of John Kirby's Sextet where he showed his versatility by mostly playing crisp solos while muted.

Shavers was in demand for recording sessions and participated on notable dates with New Orleans jazz pioneers Johnny Dodds, Jimmy Noone, and Sidney Bechet. He also had many opportunities to write arrangements for Kirby and had a major hit with his composition "Undecided." After leaving Kirby in 1944, Shavers worked for a year with Raymond Scott's CBS staff orchestra, and then was an important part of Tommy Dorsey's Orchestra from 1945 until past TD's death in 1956.

Although well-featured, this association kept Shavers out of the spotlight of jazz, but fortunately he did have occasional vacations in which he recorded with the Metronome All- Stars and toured with Jazz at the Philharmonic; at the latter's concerts in 1953, Shaver's trumpet battles with Roy Eldridge were quite exciting. After Dorsey's death, Shavers often led his own quartet, although he came back to the ghost band from time to time.

Shaver played at one time or another with Dizzy Gillespie, Roy Eldridge, Johnny Dodds, Jimmy Noone, Sidney Bechet, Midge Williams and Billie Holiday.

During the 1960s, his range and technique gradually faded, and Charlie James Shavers died from throat cancer in 1971 at the age of 53. His friend Louis Armstrong died while Shavers was on his deathbed, and his last request was that his trumpet mouthpiece be buried with Armstrong in his coffin. 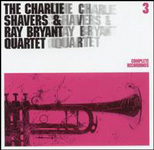 The Finest Of Charlie...

All About Jazz musician pages are maintained by musicians, publicists and trusted members like you. Interested? Tell us why you would like to improve the Charlie Shavers musician page.