He played in a forceful, gripping manner that reflected the influences of Louis Armstrong, Bubber Miley, and Bix Beiderbecke, whose solos he once reproduced on record. Stewart played on Potomac riverboats before moving to Philadelphia. He went to New York in 1921.

Stewart worked with Elmer Snowden in 1925, then joined Fletcher Henderson a year later. But he felt his talents were not at the necessary level, and departed Henderson's band, joining his brother Horace's band at Wilberforce College. Stewart returned in 1928. He remained five years and contributed many memorable solos. There was also a brief period in McKinney's Cotton Pickers in 1931, a stint heading his own band, and another short stay with Luis Russell before Stewart joined the Ellington Orchestra in 1934.

He was a star throughout his tenure, co-writing classics "Boy Meets Horn" and "Morning Glory." He also supervised many outside recording sessions using Ellingtonians. After leaving, Stewart led various combos and performed throughout Europe and Australia on an extensive Jazz at the Philharmonic tour from 1947-1951.

He lectured at the Paris Conservatory in 1948. Stewart settled in New Jersey to run a farm in the early '50s. He was semi-retired, but found new success in the media. He worked in local radio and television, while leading a band part-time in Boston.

Stewart led the Fletcher Henderson reunion band in 1957 and 1958, and recorded with them. He played at Eddie Condon's club in 1958 and 1959, then moved to the West Coast. Stewart again worked as a disc jockey and became a critic. While he published many excellent pieces, a collection containing many of his best reviews, Jazz Masters of the Thirties, came out posthumously. There's also a Stewart autobiography available. 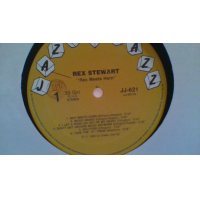 All About Jazz musician pages are maintained by musicians, publicists and trusted members like you. Interested? Tell us why you would like to improve the Rex Stewart musician page.