There is no doubt that André Matos has chops to burn. Placed firmly in the tradition of John Abercrombie and Pat Martino, with a bit of Sonny Sharrock at moments, a lot of Berklee (College of Music) influence is readily apparent, but with a bit of headiness that also reflects the guitarist's time at the New England Conservatory. Quare (2010), released on saxophonist Greg Osby's record Inner Circle Music label, serves as a nice introduction to Matos' compositional skills as well as his instrumental talent, and finds him in good company, receiving strong support from a sympathetic and versatile group.

Matos allows his interest in more experimental sounds to take the forefront in the three "Interludes." "Harlem Days" has some lovely Fender Rhodes and screaming guitar, and is a straight up soul-rocker that works. The title track introduces the voice of Sara Serpa, adding an interesting new color and texture that blends nicely, mixing eerily with Matos' guitar, providing a touch of dissonance and dreaminess. The one composition not penned by Matos is the absolutely gorgeous ballad, "Canto do Tejo," while the guitarist's "Exile" is a modal workout. "Final Spin" is a romp, showcasing drummer Ted Poor and pianist Leo Genovese, both of who do yeomen duty on the record, contributing tastefully, supporting and buoying Matos.

All About Jazz: Berklee vs NEC? You attended both; can you elaborate on the different experiences and strengths of each? What you took from each?

André Matos: Those were both very important experiences. At Berklee, I was a beginner. I learned some from the classes, but most of all from meeting and playing with people (some were experienced musicians) from all over the world. The two-year period in between both schools was also a very important time for me, being in Portugal and being busy playing and teaching for the first time.

NEC was a more serious thing (it was a masters), opened my musical vision and gave me a lot of different perspectives, I have to highlight my lessons with Danilo Pérez and George Garzone, which influenced me a lot. I was exposed to a vaster array of musical styles in the jazz tradition and also dived into the contemporary composers scene a little bit.

In formal training (from 16 on), I listened to Charlie Parker, Charles Mingus, John Coltrane, Wes Montgomery and Jim Hall; later, all groups by Keith Jarrett and Paul Motian; even later, all Paul Bley, Bill Frisell, John Scofield, Kurt Rosenwinkel, Ben Monder and George Garzone´s The Fringe. As my ears keep opening, I keep searching for more out things but also more in, if you know what I mean.

AAJ: Can you tell me your five favorite guitar players? Records? Composers? 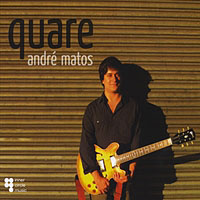 AAJ: The interludes on the record are beautiful, brief moments sprinkled in, a bit different, showcasing your interest in alternate sounds. What did those mean to you, what were you trying to convey?

AM: Those sounds were already conceivable in my head, originally I didn´t intended to do something like that on this session, but they had this Martin acoustic [guitar]in the studio. I picked it up and Leo [Genovese] found this crazy keyboard, the Optigan, Noah [Preminger] was still around, the other guys had left by then, so I just said, let´s play some moments. We recorded for 40 minutes nonstop, but those tracks were already like that, they felt like tunes in a way, each one with a slightly different vibe. It was just a matter of fitting the pieces, it became clear to me when we stopped that those would be interludes.

AAJ: What do you think of the jazz scene in the US at the moment? You are on Greg Osby's label, how has that experience been?

AM: it´s exciting to be in New York in this moment of my life/career, although I don´t know if I want to stay around for many more years. It´s an incredible opportunity to realize all your musical fantasies. You can do anything here, and for whatever you want to do you have the best musicians available, to play, to listen to, to learn.

AAJ: You certainly have a searching style, where do you see your music progressing next?

AM: I don´t write much on my tunes; in a way I want to do it even less and explore a somewhat freer playing, maybe develop it in a trio setting and try to put together different styles of playing the guitar which in some way are all the different facets I think I have. In the other hand, I also want to write more and more and maybe expand the band, with instruments that I never thought of using. I have the fantasy of using a lot of instruments in a perfect combination of written and improvised music. Also, I would like to record a jazz album, maybe playing songs, with guitar bass and drums, and do it simple and honest, if you know what I mean, just pure, uncompromised and warm jazz guitar music.