We Three Kings: The Heath Brothers 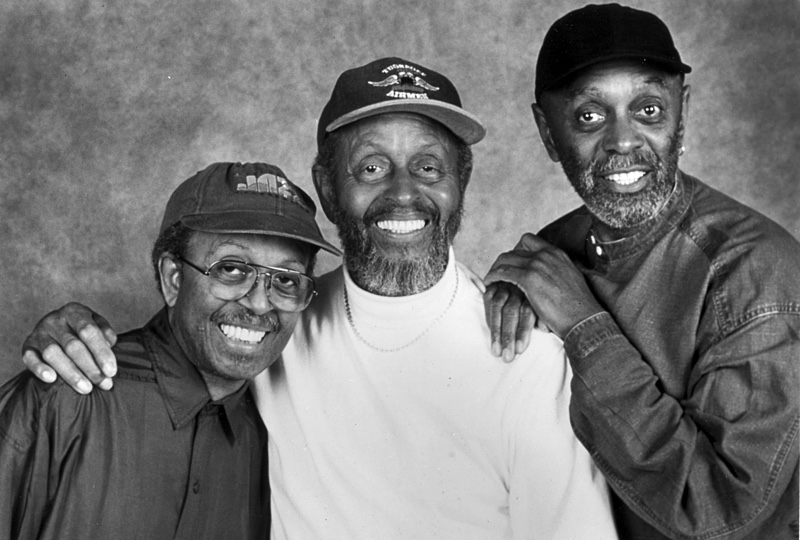 BY AAJ STAFF
March 9, 2015
Sign in to view read count
This article was originally published at All About Jazz in 2002.

Bundle these three brothers' experiences and associations through their individual and collective careers, and anyone with even the slightest notion of jazz appreciation will indubitably realize the significance of the Heath triumvirate—bassist Percy, saxophonist Jimmy, and drummer Albert "Tootie."

What an in-depth jazz history textbook could be created, based solely upon the Heaths' history in jazz. From bebop pioneers Dizzy Gillespie, Charlie Parker, and Thelonious Monk, to John Coltrane, Ornette Coleman, Anthony Braxton, and Roscoe Mitchell, as well as vocalists Ella Fitzgerald, Sarah Vaughan, Carmen McRae, Nancy Wilson, and Nina Simone—the three have covered a lot of ground in their well-documented careers. So much so that elder Heath brother Percy flat-out said during a recent interview with his fellow Heath brothers, "We played with a lot of people, so if you want a chronology of who we played with—forget it—you don't have enough tape!" Truer words have never been spoken.

Both older Heath brothers were longtime associates of Dizzy Gillespie, whose big band in the '40s served as a nurturing ground for its rhythm section, which would break off and become what would be known as the Modern Jazz Quartet (MJQ). Said Percy of the MJQ's origin, "I asked Birks [Gillespie's middle name and nickname], 'You know I got a kid now man, and I need a little more money. And he said, 'You ain't worth what you're getting.' That's when I left, and we formed the MJQ. That's the biggest favor he ever did for me!" The MJQ, co-led by pianist John Lewis and vibraphonist Milt "Bags" Jackson, also included drum regular Connie Kay and bassist Percy (who briefly took lessons from Charles Mingus, gaining some significant and needed pointers from the fellow bassist, before the MJQ group became incorporated). The foursome lasted 43 years, an unheard-of total in any genre of music, let alone jazz, with the same line-up since its beginning years. It is widely acknowledged that the MJQ helped to give jazz its just respect by bringing the music and tradition into concert halls throughout the U.S. and around the world, hence contributing to jazz' status as "America's classical music."

Jimmy, the "writer, arranger, philosopher, and professor" (as "Tootie" appropriately labels one of his two older brothers), has been associated with Gillespie basically since his jazz career started out as a mid-teenager. He even still performs in the various Dizzy alum tribute bands that visit the Blue Note on a regular basis. Gillespie, however, was but one of countless trumpeters the saxophonist performed with throughout his illustrious career. Now at the age of 76, and as musically prolific as he was back in the '40s with nearly two dozen sessions under his belt as a leader, Jimmy is grateful for his many trumpeter affiliations, from Miles Davis, Clifford Brown, Lee Morgan, Kenny Dorham, Art Farmer, Blue Mitchell, and cornetist Nat Adderley, to the still quite active Freddie Hubbard and Clark Terry. As he continued to list them off, Jimmy half-jokingly boasted, "I played with damn near all of the trumpet players... They're the ones who hired me!"

Without hesitation, Jimmy revealed, "[My] favorite person in the music is Dizzy. I learned a lot from him. He was just constantly teaching all the time. There wasn't anybody else that I could have been around as long as [with] Dizzy... My relationship with him went from being in his band in '49, until he passed away [which was 1993]." In that band of Dizzy's were a "who's who" of jazz, including a fellow alto saxophonist at the time by the name of John Coltrane, also a contemporary of Jimmy's, whose birthday is but a month earlier. It was actually a decade after this experience when Jimmy briefly served as his old friend's replacement in the legendary quintet of Miles Davis. Coltrane was but one of jazz' greats whom all three Heaths, at one point or another, got a chance to play with. His first date as sole leader (Coltrane, 1957) featured "Tootie," the youngest of the Heaths. Then a few years later, Trane's The Avant-Garde (Atlantic, 1960) session with Don Cherry, would feature Percy alternating with Charlie Haden on bass, and another Ornette Coleman alum, drummer Ed Blackwell. "Ornette was my favorite of 'that' music," is how "Tootie" put it.

Percy was actually responsible for Ornette's debut follow-up recording as a leader of that seminal group (Tomorrow is the Question!, 1959). "I'm the one that they came (to) and got to make that record. Ornette said, 'I want you to make a record' ...I introduced John Lewis to Ornette—I tried to get him to listen to Ornette for a long time... I identified with Ornette's music because it seemed radical at the time, but Ornette Coleman had absorbed Charlie Parker up the wazoo and everything else that was going on before him, and he was able to extract a style or concept from all that music.

Rhythmically, don't mess with him. Harmonically, it was strange...I [am] the only living or otherwise bassist that played and recorded with Charlie Parker AND Ornette Coleman. That's pretty wild!" And referring to one of his most memorable associations and experiences, which was with Bird, Percy in all seriousness related that, "It (was) some of the most remarkable spiritual feeling that I ever had musically...The feeling Charlie Parker gave to the rhythm section was like he just lifts the bandstand, it just takes over...sometimes on the bandstand [as] the band locks in that groove, it's more spiritual communication than physical—an upper revelation...That's the reward of being a jazz musician, because every now and then, it locks in and you say 'Heaven'!"

In addition to the many many fellow jazz musicians the three played with were John Lewis and Milt Jackson. "Tootie" actually became Connie Kay's drumming replacement (alternating with Mickey Roker) in the MJQ after the great drummer passed away in '94, though "Tootie" regrettably did not get the opportunity to record as a member of the MJQ. They unreservedly admit that there were inevitably many masters and legends of the music who at least one of the three did not get the opportunity to play or record with, Louis Armstrong and Duke Ellington among them. However, each is eternally grateful for the careers they've had and still have. "There's a lot of people we haven't played with," says Percy, "but we played with a lot of good people, a lot of good jazz." When all three Heaths get together (musically or in a non-stop laugh-fest when their instruments aren't within arms-reach), it is always reason for celebration given the two younger Heaths' still very active music itineraries throughout the year, not to mention Percy's fishing addiction (when asked what music he thinks about when fishing, he sharply replied, "I'm thinking about fishing!"). Now that the elder Heath is 79 years young (turning 80 next April!), Percy's exclusive music activities are solely with his brothers on select dates at clubs and on cruise ships. Otherwise you can be guaranteed that he is fishing out on his boat (appropriately named "The Fiddler") in the waters right off the shores of Montauk. He will also achieve one of the very few milestones missing in his career—the first session ever under his very own name, A Love Song (Daddy Jazz), is expected to be available and sold, hot-off-the-presses, at the Heath Brothers' week-long engagement at the Iridium jazz club this month. Not only will you catch quite a bit of jazz history by taking a trip to the Iridium between the 19th and 24th, but you will also be treated to some of jazz' current vitality. The Heaths hope to go back into the studio for what would be their tenth recording as the Heath Brothers (the two most recent being on Concord Records), and though Jimmy was not as enthusiastic as "Tootie" and myself, the concept of just an all-Heath trio session is sure an enticing one. Whatever the case may be, the Heath Brothers' continuous creativity and obvious link to the great tradition we all hold dear to our hearts and ears is heaven-sent.

As our conversation wound down towards lunchtime, Jimmy exclaimed, "This family, we've survived. And in terms of everybody that's in the world, we've all been around the greatest musicians that ever played this music—America's music." And though it's not all about nostalgia with the Heaths, who are by no stretch of the imagination a relic threesome, some final words were offered by Percy amidst the shopping lists of countless musician friends they all have encountered over these many decades, "Memory lane, is that where we're going? Well, that's what we got a lot of, and lucky to have it!" And aren't we lucky to have them—true jazz royalty.