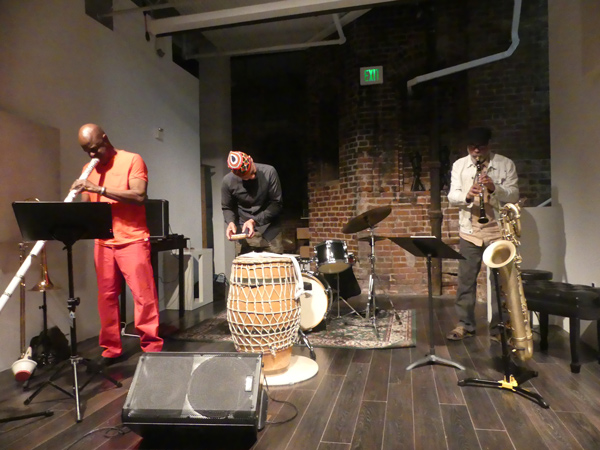 San Francisco's Tenderloin District is a down-and-out area which wags have christened "Twitterloin," (owing to the proximity of Twitter and other tax companies given tax subsidies to erect their palatial edifices in this culturally diverse neighborhood). And the Center for New Music, on Taylor Street, is a gem in its heart.

While the arrival of the tech industry, and the increasing gentrification that comes with it, has forced other music venues out of business, the Center for New Music, founded by musicians Adam Fong and Brent Miller in 2012, is going strong. (The Rova Saxophone Quartet, stalwarts of the Bay Area improvisational music scene, had financially sustained the venue until it could obtain nonprofit status.)

The center has frequently hosted avant-garde music—ranging from the aforementioned Rova to open-mike nights to performances by luminaries such as pianist Myra Melford. Now, Fong and Miller co-curated "Founders Series" marks a fortuitous departure for this intimate, listener-friendly space. Their first ensemble is ample proof of their excellent taste. Kahil El'Zabar's Ethnic Heritage Ensemble is an act no jazz fan would miss. For this latest incarnation, El'Zabar teamed up with Hamiet Bluiett, Mr. Baritone Sax himself, along with trombone wizard Craig Harris.

Requiring no introduction to the jazz aficionado. Bluiett has been one of the foremost baritone sax players on the scene for decades, having collaborated with artists ranging from Charles Mingus to Sam Rivers to Aretha Franklin, but he is best known for his membership in World Saxophone Quartet, a long-running collaboration between four saxophone players.

Trombonist Harris has has already been schooled in improvising with baritone sax players, given his close camaraderie with Pat Patrick (who was his teacher at SUNY) during his time with the Sun Ra Arkestra. Harris has also played with the likes of clarinetist Don Byron, pianists Cecil Taylor, Muhal Richard Abrams and Abdullah Ibrahim, saxophonists David Murray and Sam Rivers, as well as the late bassist Charlie Haden.

Leader and percussionist Kahil EL'Zabar has worked with a number of artists, ranging from Dizzy Gillespie to Stevie Wonder to Cannonball Adderley to Paul Simon. He currently teaches at the Chicago Academy of Music.

Wearing a colorful, ornate woven cap, ensemble director EL'Zabar, took the stage, and electrified kalimba in hand, played intently and while intoning intently. Bluiett, chimed in on clarinet. Then shaven-headed Harris, donning all red, was wearing all read and had his, entered with breathing resonant tones through his personally-crafted digeridoo, knocking it against one of the large white square baffles on the wall (for progressive effect) as he played. (Later on, in a slightly embarrassing but rather humorous interlude, the baffle fell off and had to be removed). Next up was John Coltrane's classic tune "Impressions;" Harris pumped his trombone while EL'Zabar brought forth a number of "whoas."

The creatively named "Indestructible Consciousness," penned by Famoudou Don Moye of the Art Ensemble Of Chicago ended the set. Moving out from behind his drum kit, EL'Zabar placed himself in front of an impressive African-style drum, which he had made himself, and, tilting it at an axis on its circular wooden platform, he went to town on a solo. Harris re-entered with muted trombone, and Bluiett took his seat in front of his baritone sax. Harris dropped the mute; it fell on the carpet on which EL'Zabar's drum set stood; and he and Bluiett exchanged riffs. Then, EL'Zabar doffed his cap and called the band which then took a break.

On stage once more, the trio launched into an interpretation of Miles Davis's classic "All Blues;" EL'Zabar soloed on his kalimba before Bluiet soloed on flute. Harrs chimed in on trombone, and Bluiet soloed on baritone sax—eliciting tones ranging from low to shrill. Harris soloed and then EL'Zabar returned on drums. EL'Zabar launched into a resonating version of Wayne Shorter's "Footprints" and then used his body, expressively, to sing "Save Your Love For Me."

Enthusiastic applause brought them back for EL'Zabar's hand clapping, singing and dancing during "Running in the Street;" Bluiett played clarinet and Harris pumped out trombone. Then, buzzed on the music, it was time for the enraptured audience to mingle and then exit.