The man most associated with the Art Ensemble of Chicago as its percussion master, drummer extraordinaire Famoudou Don Moye was born on May 23, 1946, in Rochester, New York. In high school, he began playing drums, congas and bongos and went on to study percussion at Wayne State University.

In 1968, Moye toured Europe with the Detroit Free Jazz Band and worked briefly in Italy for RAI (Italian Radio and Television). While abroad, Moye had the opportunity to work with Steve Lacy, Pharoah Sanders, Sonny Sharrock, Randy Weston and Art Taylor and to collaborate extensively with Moroccan musicians.

Moye joined the innovative, avant-garde quintet, the Art Ensemble of Chicago (AEC), in 1969 and he has been a permanent member ever since. Moye and the other members of AEC draw their influence from both Africa and the Caribbean, rural as well as urban spaces - the whole spectrum of black music. Their radically experimental performances include painted faces, costumes and exotic instruments, which all contribute to their energetic improvisations. In addition to his work with AEC, Moye has been a member of The Leaders, and has recorded with the Black Artists Group, Joseph Jarman, Don Pullen, Cecil McBee, Hamiet Bluiet, Julius Hemphill, Chico Freeman and Lester Bowie's Brass Fantasy. He also leads the Sun Percussion Summit, a group dedicated to exploring the traditions of African American percussion music.

To offer up a brief look at his most recent releases, some which are reissues of his earlier work, we have; “Afrikan Song,” (’96) Sun Percussion Summit w/ Mamane Samake & Naby Camara. “Jam For Your Life,” (’97) re-issue w/Ari Brown, Billy Brimfield, and the late great Luba Raashiek & the late Kenny Prince on piano. “Calypso’s Smile,” (’98) re-issue series from 1992 sessions. This leads up to his 2002 effort; “A Symphony of Cities,” Experimental sound studies from percussion giant Don Moye and Chicago bass man Tatsu Aoki, with Francis Wong and Joel Brandon.

His recordings have won him the praise of critics at such esteemed publications as Rolling Stone, Down Beat, Melody Maker, The New York Times, Audio Magazine and Stereo Review. He was the winner of the Downbeat International Critics Poll in 1977, 1978 and 1982, and the New York Jazz Poll in 1979 and 1980. He received performance grants from the National Endowment for the Arts in both 1974 and 1981. He lives in Chicago, with his wife, Gloria, and their son, Bongo. 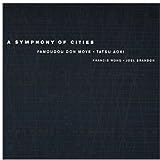 A Symphony Of Cities

Jam For Your Life!

All About Jazz musician pages are maintained by musicians, publicists and trusted members like you. Interested? Tell us why you would like to improve the Oscar Brown Jr. musician page.