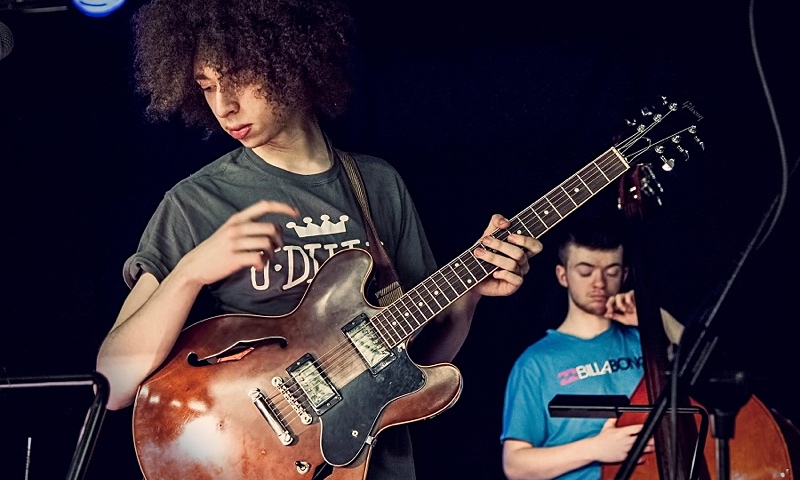 It’s the culture and the beautiful things that a society produces, those are the things that should survive for thousands of years–not the designer jeans. &#151Frank Zappa

In just five years, Brilliant Corners—Belfast's only jazz festival—has earned a reputation for adventurous programing. The 2017 edition went one further, with the inclusion of alt rock and electronic music stretching the boundaries of what constitutes a jazz festival these days.

Or perhaps not, for as jazz celebrates its first centenary it's practically the norm throughout Europe—and elsewhere—that other styles of music usually feature on jazz festival programs. If such artistic license is what's required to grow jazz audiences and bring younger people in through the doors then it can hardly be a bad thing, as long as jazz—in all its variations—makes up the guts of any festival program.

Brilliant Corners 2017 was, without a doubt, primarily focused on jazz and its close relatives, with purely improvised performances, straight-ahead ensembles and Charles Mingus-inspired tribute catering for a broad spectrum of jazz fans. In addition, improvisation workshops for youth and the screening of several films provided a welcome educational aspect to the festival.

Pleasingly, attendance was extremely healthy for all the concerts. About one third of the audience were regulars at gigs put on throughout the year by Moving On Music—the promotors behind Brilliant Corners and so much of Belfast's best live music—while the remainder were newcomers to Brilliant Corners, many taking a punt on a spot of live music without knowing anything about the bands on show. This, combined with the fairly wide age-range and the notable gender balance of the audiences, were also signs that Moving On Music is doing something right.

Improvised music on a wet Tuesday night isn't everybody's cup of tea, but they're a hardy lot in Belfast, immune to the often lousy weather that afflicts this small, westerly outpost of Europe. The venue was the Sonic Arts Research Centre, the first purpose built facility of its kind in Ireland and the UK, which was opened in 2004 by Karlheinz Stockhausen—one of the twentieth century's most important composers, particularly in the field of electronic music.

SARC conducts cutting edge research into multiple aspects of the creation and projection of sound, and regularly hosts concerts to boot. These concerts at SARC are a must for hi-fi heads, as where else are you going to experience live music through forty eight speakers, positioned around, above and beneath you?

Two bands served up music rooted in the free-improvisation tradition. Although there were obvious stylistic differences between the two, there was also much in common in an idiom that embraced collective and individual freedom.

It was appropriate that Faint should open Brilliant Corners in this particular venue, given that drummer Steve Davis, saxophonist Franziska Schroeder and pianist Pedro Rebelo came together following an impromptu meeting at SARC in 2007. Unfortunately, and for reasons unstated, Rebelo was unable to make the gig, but the trio remained a trio with the inclusion of guest cellist Ricardo Jenkins, thus making Faint+.

Exploring the lesser aired textures and phonic possibilities of their respective instruments from the outset—breathy saxophone exhalations, rasping cello notes and restless percussive sonorities that included arco-teased cymbals—the trio's approach was based on the push and pull of collective improvisation. Tentative at first, longer and more insistent braying notes from Schroeder provoked an upsurge in Davis and Jenkins' animation.

Percussive maelstrom, dissonant saxophone sounds and trembling bass rose like a powerful wave, and, predictably perhaps, broke at its zenith to then subside once more, an edgy, meditative calm prevailing after twenty minutes of exploration. The second and final piece stemmed from Davis' opening moves, a more easily defined rhythmic pattern inviting immediate impetus from the other two musicians. Compared to the dissonance and sometimes fractured nature of the opening improvisation, Schroeder's bolder soloing, buoyed by more pointed rhythmic intent, seemed like a glorious resolution to pent-up tensions—for the performers and audience alike.

It was unlikely that many in the audience remained indifferent to this trio's probing dialogues, where the spectre of the unknown held almost permanent sway.

The quartet Sirene 1009 is, appropriately enough, named after an asteroid whose orbit crosses that of Mars, for the music purveyed by guitarist Han-earl Park, double bassist Dominic Lash, drummer Mark Sanders and vocalist Caroline Pugh was pretty out there.

Even at its most minimalist, with the music barely rising above a whisper, Pugh's articulations dominated the ear. Park's detuning dynamics, a spare bass pulse and sighing cymbals lent atmospheric support, but after a while Pugh's marathon efforts seemed to detract from, rather than enhance, the music's possibilities. Whilst ebbing and flowing in intensity, the music conveyed little overt sense of internal conversational logic, and a much greater sense of theatrical performance. To this end, Sirene 1009's greater use of the rooms multiple speakers compared to Faint—who opted for a conventional speaker set-up—was in keeping with the quartet's primacy of sonic impact over conversational flow.

The second piece, stemming from gentle collective stirrings, offered clues to Pugh's Scottish folk roots, the singer's unconventionally lyrical lament contrasting with the restless, jittery propulsion of the supporting cast. Sanders was the catalyst for the quartet's most cohesive—and intense—chemistry, but the lack of another outstanding individual voice besides Pugh's rendered the music, for all its risk-taking, slightly repetitive.

The second day of Brilliant Corners was the only one out of the five to offer a single act. The Black Box, one of Belfast's finest intimate venues, played host to Ronan Guilfoyle 's occasional, trans-Atlantic quartet, returning to Belfast after a gap of three years. The band's debut, the excellent Hands (Portmanteau Records, 2015), provided the basis of two sets totalling ninety-minutes.

Expansive soloing of the highest calibre extended the recorded life-span of the compositions, but the disciplined ensemble execution of Ronan Guilfoyle's knottily complex charts carried equal weight. This duality of firmly etched compositional lines and explosive freedom on songs such as the noirish, slow-burning "Sneaky," the helter-skelter "Hands" and the boppish, Charlie Parker-esque "From the Apple" made for compelling listening.

David Binney blew away any trans-Atlantic cobwebs with a burrowing alto saxophone of some intensity on the opener "In Fairness," with Ronan Guilfoyle's fluid bass lines and Tom Rainey's perpetual motion providing something of a moving canvas. Chris Guilfoyle 's response was to up the ante with a tumbling guitar solo that was as technically thrilling as it was consistently engaging. One of the most exciting guitarists to have emerged from Ireland in years, Guilfoyle's recording debut came on Hands, while Umbra—the debut of his own band—demonstrated notable compositional flair. His judicious use of pedals on the ska-tinged "Telemachus" nuanced comping on "Close Call," feathery lyricism on the unaccompanied intro to the ballad "Crystal" ,and the arresting tête à tête with Rainey on the intro to "Nod" revealed a broad sonic palette, but it was his fluid, straight-ahead improvisations that really caught the ear.

Binney's fast-and-furious alto, spurred on by Rainey, was at the core of the short but memorable "Nod"—a breathless finale to an impressive gig. Whether Ronan Guilfoyle's Irish/North American quartet will record again and tour more extensively remains to be seen, but if it's to exist as an occasional pop-up band, then that makes outings such as this memorable Brilliant Corners performance all the more special.

Nineteen-year-old guitarist Joseph Leighton was making a return to Brilliant Corners after having impressed at the 2016 edition in a band of emerging Northern Irish jazz talent. Since then, Leighton has gone from strength to strength, becoming one of the youngest musicians ever to have participated in the internationally renowned jazz course at the Banff Centre, Canada, as well as securing a place at London's Trinity Laban Conservatoire of Music and Dance later this year. In addition, Leighton is one of the recipient's of Moving On Music's inaugural Emerging Artist Programme, which helps promote and develop outstanding artists across musical genres.

Leighton's genre is assuredly jazz, but as the pedal effects and loops that bookended the self-penned "Planet Nine" indicated, the guitarist has at least one foot in the modernists' camp. The other is firmly planted in a tradition that stretches from Jim Hall to Pat Metheny, his clean articulation and spacious phrasing accentuating an overtly melodic approach. There was a nod to Sonny Rollins on the standard "Without a Song" -bassist Conor Murray and Leighton both impressing on this mid-tempo swinger. It was drummer James Anderson's turn to stretch out on another standard, "You'd Be So Nice to Come Home To," with Leighton and Murray playing a largely supporting role.

Two beautifully weighted ballads provided undoubted highlights of the set. Leighton's "Mirror Lake," and the standard "Detour Ahead"—inspired by pianist Bill Evans' version—featured nuanced trio interplay and showed Leighton at his most refined and lyrical. It's early days yet for the young guitarist/composer, but you get the feeling already that great musical adventures lie ahead. Derry's loss will be London's gain.

This year's Brilliant Corners offered three very different documentary films. Due to logistical problems, the Thursday screening of Kaper Allen's biopic My Name is Albert Ayler was cancelled. In its place, Thomas Richman's Mingus: Charlie Mingus 68 (1968) was screened. The fifty eight-minute black and white documentary captures Mingus as he and his five-year-old daughter, Carolyn, are evicted from their New York apartment in 1966.

A surprisingly relaxed Mingus, affable and philosophical, , talks to camera as he potters about his chaotic apartment, playing with his daughter, occasionally sipping on a glass of wine, or tinkering at his piano. Released in 1968, a tumultuous year in America race relations/politics that saw the assassinations of Martin Luther King and Robert Kennedy, Mingus' thoughts on racism, expressed at times in improvised poetry, are poignant and moving.

Mingus appears to have at least two rifles lying amongst the clutter, one of which he fires into the ceiling with the calm demeanour of someone swatting a fly. These scenes evoke the iconic image of Malcom X—assassinated a year before the making of this documentary—clutching an M1 Carbine, and chime with the legend of Mingus as a man unwilling to back down in the face of injustice, and of one quick to fight.

Of interest too, are sequences of live performances from Lennie's On The Turnpike—Lennie Sogoloff's famous jazz club,—featuring Mingus in superb form along with Walter Bishop, Jr., Dannie Richmond and Charles McPherson. The emotional intensity of the music and Mingus' jovial vibe makes for stark contrast with the rather depressing scenes of the eviction. A fascinating fly-on-the-wall glimpse into a turbulent period of American history and an important chapter in Mingus' life—fuel to the flames that raged in Mingus' autobiography Beneath The Underdog (1971).