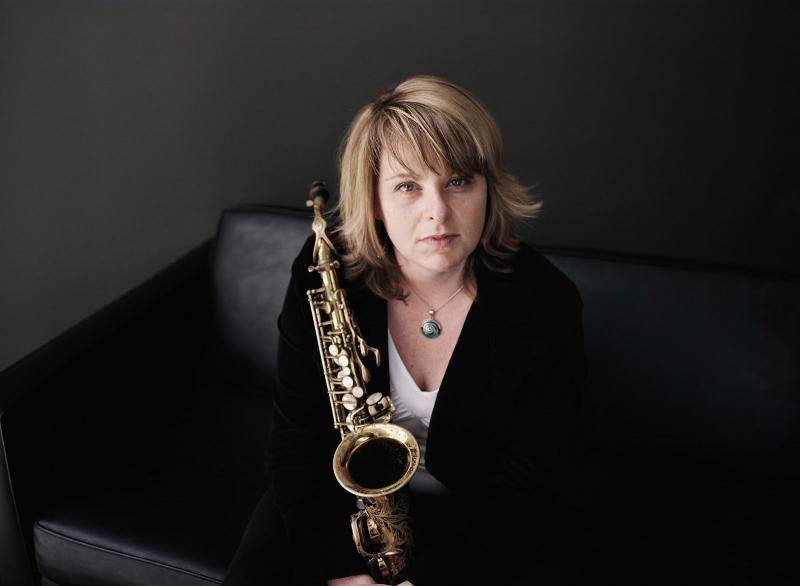 I was first exposed to alto saxophonist Christine Jensen through working with her trumpet playing sister Ingrid Jensen. We played some of her music, which really struck me as direct, mature, grounded and highly creative. Later on I got to meet her; unfortunately, we have not played together much (except for maybe one or two jam sessions years ago). I hope that will be rectified in 2011! Jensen has a new CD called Treelines (Justin time Records, 2010), which features a large ensemble and her original music. In addition to alto saxophone and composition, Jensen plays a mean soprano saxophone, and also plays piano quite well. She's recently added motherhood to her list of activities (Congratulations! Hope you like coffee...unless your baby sleeps, unlike mine....oy vey...anyway....) I recently sat with this Montreal-based musician to discuss some high concepts relating to music.

George Colligan: OK, Here we go. Let me say off the bat that I haven't done many of these, and I like to keep it loose. I'd rather you just talk about whatever you want, and I don't edit much. I have some questions, which might seem general, but hopefully it will lead to something interesting.

So I'd like to know what made you want to be a musician, and how specifically did you get into jazz music?

Christine Jensen: Well, I grew up in a musical family. My mother was a great piano and music teacher plus she was into musical theater. There was a lot of classical, and American songbook music in our house through her LP collection, and from what she played on the piano. She had a few jazz piano recordings that she loved playing including Oscar Peterson Trio and George Shearing. She also loved Nat "King" Cole and singers [like] Mel Torme and Rosemary Clooney in particular.

Needless to say, I had piano lessons from an early age, and was lucky to participate in a strong public school music program that included combo, big band, along with concert band. My older sisters chose trumpet and trombone, so I was destined for sax. Although in hindsight, anyone who wants to play sax might want to start on clarinet, as it is a more difficult instrument.

Anyway, my early training really helped me to become a composing jazz saxophonist, as I was able to soak up so many genres of music.

Anyway, I had terrific public school teachers—the same schools as Ingrid and Diana Krall in Nanaimo—who really had a passion for jazz. They got us all improvising and playing repertoire off of Kind Of Blue (Columbia, 1959) and things like that. It was a really good starting point. The teachers also encouraged us to jam with them outside of school time, which led to gigs and great playing opportunities around Vancouver Island.

GC: Was there a specific moment when you decided that music would be your life, or was it gradual, or maybe you always knew?

CJ: For me it was gradual. I really went back and forth between piano and sax from age 15 until about 25. Once composition started flowing, I knew that I was committed to jazz, but it was always there in front of me for so many reasons. Having Ingrid as an older sister kept jazz very present for me, although we didn't perform together until I was in my 20's.

My teachers also encouraged me by feeding me with recordings to listen to and with gig opportunities really. School was fun, but I was not focused until I moved back east to attend McGill. It was a small program with some of Canada's most elite players kicking my butt, including Kelly Jefferson, Mike Rud, Denzal Sinclaire, and my now husband Joel Miller.

GC: I like the dreaming thing you were talking about. Composing is kind of like dreaming. If you've ever seen that clip of Duke Ellington in his later years being asked about his compositional process or something, and he says, "Oh, this? This is just dreaming—that's all I do is dream."

CJ: Exactly, he along with Billy Strayhorn are my heroes for that. I have also heard similar statements from Kenny Wheeler, Bill Frisell, Maria Schneider, and Jim McNeely. We all want to give our impressions on paper, and that is such a difficult hurdle in the compositional process. There is a certain amount of risk taking in order to get to honesty in composition, I think...

I also think of Gil Evans' process as well. It should take a long time to commit to a sound that you are trying to capture. He would play a voicing over and over before committing to it.

GC: So are you saying that you labor over the compositional process?

CJ: In fact, I have to work really hard at everything in order to get into a dream state in my compositional process. Quite the opposite of improv.

GC: Interesting. So you don't see improvisation and composition to be connected in that sense? Like a similar process but at a much slower or faster rate? Do you ever try to get into a dream state when you are improvising?

CJ: Definitely. They are two different processes for me, yet they must weave together at the final stage, which is the performance. Regarding composition—I first have to force myself into a dream state, which means shutting down my whole world around me. I also usually have some sort of deadline and a bit of a map of what I am composing for. I can usually break it down into three or four components, rhythm, melody, counterline melody (usually an accompanying bass figure). If the initial idea is strong enough I can further orchestrate it for whatever group context that I am working in. Basically, most of what I compose breaks down to a lead sheet.

Regarding improvisation, I do get into a dream state, as long as I am comfortable with my playing. That means keeping up my jazz vocabulary, and hopefully building on it as well. I get equally inspired as a performer and composer just from listening to the development of a great solo like a solo from Joe Henderson or John Coltrane. I really feel that a great jazz solo is just as meaningful as a strong composition.

Back to composition versus improv and dream state: both are in the moment, but composition is such a solitary state. I love improv because I get to have a conversation with at least one other person and hopefully the element of spontaneity prevails. I guess that is what makes for meaningful conversation that the audience can react to as well.

GC: I was always struck with the clarity of your compositions. They remind me of Wayne Shorter or Thelonious Monk in the sense of having a very clear idea of a melody and thematic material—not to say that it ever sounds cliché or obvious. Although I get the sense that you aren't afraid of the obvious in the effort to try to be too clever or something. Your music has a strength of ideas that really appeals to me. I try to write this way, with questionable success. Is this something you are conscious of? It seems like a consistent pursuit throughout all the music of yours that I am familiar with.

CJ: That is such a compliment! I am constantly struggling with initial ideas. It is like a big drawer of little scraps piling up, and I go back and look over these ideas. If they jump out at me, I might start to re-hash them and develop them further. Otherwise, it is back to the drawing board. Sometimes ideas flow fast, but it is probably because I have been unlocking an idea that was buried in my subconscious. The more time I devote to composition, which includes studying different styles of music, the more ideas I come up with. The tank runs empty the longer I stay away from it too. I really do pull from Shorter, and the rhythms and harmonies of bands from the past, and try to emulate them, give up and move on. That seems to be when they pop back in. I think of it as the blender affect in coming up with a unique sound. I have to listen equally to all sorts of music. African, Brazilian, European, American, they are all worth intense and equal study.

I guess not being afraid of the obvious is also risk-taking. Once I commit to an idea melodically, I kind of have fun with the idea of a counter-attack with rhythm and possibly harmony. I also tend to gravitate toward a pop mentality with melodic ideas. Maybe that makes the composition memorable?

GC: Why shouldn't it be memorable? Does that make it less intellectual somehow? I'm checking out your CD entitled Look Left (Effendi Records, 2006) and the writing is very intriguing but also memorable. It's not being afraid to have clear ideas but it also makes for great improvisational vehicles on that album.

CJ: As the composer, I am not the one to judge how the listener embraces the work. I write for myself first, and then hope the musicians add to the life of the work. Again, it's about having the freedom to put it our there on so many levels, with the end result being that hopefully the audience is able to gravitate toward listening to it for there own reasons. I am a lover of so much music with melody, from the Police, to Antonio Carlos Jobim, to Miles Davis, to people on the fringe that influence me know such as Guillermo Klein and Bill Frisell, not to mention Chopin, Stravinsky, Barber, Copland, Bjork, Dirty Projectors, and Django Bates. Very random list, I know, but they all compose melodies that stick with me, and a lot of it has to do with interval choice and rhythm.

GC: That's a wide range of influences to be sure. There is so much great music out there. Sometimes I feel like students are sort of pushed into a box where all they listen to is hard bop. While I feel like students need to listen to jazz, I don't ever discourage them from listening to anything. Sometimes I ask them what I need to check out! So even though the music of yours that I have heard is definitely jazz, could you say that you have a multitude of influences outside the so-called genre of jazz?