Steve Wilson has attained ubiquitous status in the studio and on the stage with the greatest names in jazz. A bandleader in his own right, Jazz Times calls him the consummate saxophonist-composer and one of the finest alto and soprano saxophonists of our time. A musicians musician, Wilson has brought his distinctive sound to more than 100 recordings led by such celebrated and wide-ranging artists as Chick Corea, George Duke, Michael Brecker, Dave Holland, Dianne Reeves, Bill Bruford, Gerald Wilson, Maria Schneider, Joe Henderson, Charlie Byrd, Billy Childs, Karrin Allyson, Don Byron, Bill Stewart, James Williams, and Mulgrew Miller among many others. Wilson has eight recordings under his own name, leading and collaborating with such stellar musicians as Lewis Nash, Carl Allen, Steve Nelson, Cyrus Chestnut, Greg Hutchinson, Dennis Irwin, James Genus, Larry Grenadier, Ray Drummond, Ben Riley, Nicholas Payton, Orrin Evans, Ugonna Okegwo and Bill Stewart.

In 2015 Wilson released his first project as a leader in 12 years, Steve Wilson & Wilsonians Grain: Live in New York: The Vanguard Sessions, on Random Act Records. Recorded live at the famed Village Vanguard in NYC on May 24 & 25, 2014, the recording features Wilsons potent quartet with Orrin Evans, Ugonna Okegwo and Bill Stewart. The CD was conceived to truly capture the live experience and the sound of one of the best listening rooms in the world. The tracking order reflects a Wilsonians Grain set, and includes three Wilson originals, and tunes by Orrin Evans, Joe Chambers, Thelonius Monk and Migiwa Miyajima. WBGO Radio describes Wilsonians Grain as jazz at its finest in conception, execution and spontaneity.

He has recorded another project, Sit Back Relax & Unwind, for JMI Records that features Ray Angry, Ben Williams and Willie Jones, III just recently released. In the vein of the old CTI recordings, it is an analog recording and will be released a vinyl LP only. Produced by Steven Mandel (Music Supervisor the The Tonight Show with Jimmy Fallon, The Roots), he also contributed four tunes that were arranged by Wilson. There are two new tunes by Wilson and an arrangement by Ray Angry of David Bowies Space Oddity.

Starting his formal training on saxophone in his native Hampton, Virginia, Wilson also played oboe and drums in school bands while performing in various R&B/funk bands throughout his teens. After a year-long stint with singer Stephanie Mills he decided to major in music at Virginia Commonwealth University in Richmond, where he performed and/or studied with Jimmy and Percy Heath, Jon Hendricks, Jaki Byard, John Hicks, Frank Foster and Ellis Marsalis. During those years he was also in constant demand for recording studio work, and as backing musician for touring shows such as The Four Tops and Sophisticated Ladies. Landing a chair with O.T.B (Out of the Blue), a sextet of promising young players recording on Blue Note Records, Wilson moved to New York in 1987 and the following year toured the U.S. and Europe with Lionel Hampton. Becoming a first-call choice for veteran and emerging artists alike, Wilson was the subject of a New York Times profile A Sidemans Life, highlighting his work with Ralph Peterson, Jr., Michele Rosewoman, Renee Rosnes, Marvin Smitty Smith, Joanne Brackeen, The American Jazz Orchestra, The Mingus Big Band, The Smithsonian Jazz Masterworks Orchestra, Leon Parker, and Buster Williams Quintet Something More. In 1996 he joined the acclaimed Dave Holland Quintet, and from 1998-2001 he was a member of Chick Coreas Grammy winning sextet Origin.

Cited by his peers in a New York Times poll as one of the artists most likely to break out as an established leader, Wilson recorded four CDs New York Summit, Step Lively, Blues for Marcus and Four For Time on the Criss Cross label. He then recorded two projects for Chick Coreas Stretch Records label Generations, his multi-generational quartet with Mulgrew Miller, Ray Drummond and Ben Riley and Passages which features his long-time musical partners Bruce Barth, Ed Howard and Adam Cruz, and special guest Nicholas Payton. Containing nine original compositions Passages established Wilson as a leader whose vision reveres the past, creates a soundscape of the present, and reaches toward the future.

In 2003 Wilsons recording Soulful Song was released on MAX JAZZ launching the labels Horn Series. It features special guest vocalists Rene Marie, Carla Cook, and Phillip Manuel and issues forth a powerful and provocative performance from these dynamic and versatile artists. As Wilson explains, Its a tribute Black radio, as it was called then, that was particularly inclusive in its programming and a galvanizing force in the community. On the same station one could hear R&B, jazz, blues, gospel, comedy, local news and affairs, and social commentary. In addition to new original material the program includes arrangements of songs by Stevie Wonder, Chick Corea, Abbey Lincoln, Gil Scott Heron, Earth, Wind & Fire, Patrice Rushen, and The Staple Singers.

Wilson was a member of the Blue Note 7, an all-star septet assembled to celebrate the 70th anniversary of Blue Note Records in 2009. The project culminated in a successful 50-city tour of the U.S., and their recording Mosaic. Also that year Wilson made his orchestral debut performing Heitor Villa Lobos Fantasia for Soprano Saxophone and Chamber Orchestra with the Vermont Mozart Festival Orchestra. By popular demand he returned to the VMF in 2010 performing a commissioned work Sweet For Duke for Saxophone & Chamber Orchestra by Jonathan Ragonese.

Wilsons current projects reflect his multifaceted artistry, versatility, and associations with some of the most highly regarded artists on the scene. His quartet Wilsonians Grain, which consists of Orrin Evans, Ugonna Okegwo, and Bill Stewart or Clarence Penn, has been featured on NPR live from the Kennedy Center and the Village Vanguard in New York City, and headlined at the prestigious Detroit Jazz Festival in 2011. Wilson is one-half of two dynamic duos, Musical Dialogue with renowned drummer Lewis Nash, they released their recording Duologue on MCG Jazz, and in another with pianist Bruce Barth as documented on their recording Home on the We Always Swing label. He co-leads an elegant trio with pianist Renee Rosnes and bassist Peter Washington, and with composer/arranger David ORourke has a repertoire as soloist with strings. Wilson is touring member of the Grammy-winning Maria Schneider Orchestra, the Billy Childs Quartet, Christian McBride & Inside Straight as well as McBrides Grammy-winning Big Band, and the Buster Williams Quartet.

An in-demand and passionate educator Wilson is the Director of Jazz Studies and an Associate Professor of Music at City College of New York. In 2019 he joined the prestigious faculty at Ravinias Steans Music Institute in Chicago, IL.

With the support of friend and mentor Dr. Billy Taylor, Wilson has been a frequent guest performer/educator at The Kennedy Center in Washington, DC. He has been a featured performer, panelist, and clinician at conferences of the Association of Performing Arts Presenters, Chamber Music of America, and International Association of Jazz Educators. Wilson was honored with the Marc Crawford Jazz Educator Award from New York University 2001 and the Virginia Jazz Award 2003 Musician of the Year presented by the Richmond Jazz Society, recognizing his outstanding service in the advancement of jazz and education in their respective communities. He is an active mentor in the nurturing and promotion of his former students emerging careers who have performed with The Count Basie Orchestra, Johnny Mandel, Beyonce Knowles, Roy Hargrove, and many others. Show less

Saxophonist Steve Wilson to Perform with the William Paterson Jazz...

From: We Want All the Same Things
By Steve Wilson 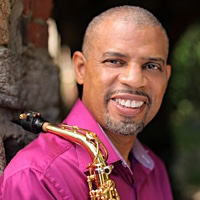 All About Jazz musician pages are maintained by musicians, publicists and trusted members like you. Interested? Tell us why you would like to improve the Steve Wilson musician page.