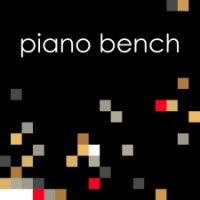 Jazz trio treatment of classical music is nothing new. French pianist Jacques Loussier has been doing it for 30 years with releases like Bach: The Brandenburgs (Telarc, 2006) and Mozart Piano Concertos 20/23 (Telarc, 2006), among many others. So, Alex Baboian's Piano Bench might not appear as novel as it is. But it is unique in that guitarist Baboian arranges late-Romantic piano compositions for the jazz guitar trio.

No Bach, no Mozart, no Beethoven, all are too early for Baboian's forward thinking. Give him Satie, Ravel, Bartok and Scriabin any day. With devilish alchemy and finely honed iron, Baboian modulates his classical treatments through mood and darkness on Satie's "Trois gnossiennes: No. 1," a piece likely recognisable to all listeners. Deep reverb and round tones add to the crepuscular air of the piece. Baboian captures the same drift on Satie's "Trois Gymnopedies: No. 1," spatial and dreamy.

But the guitarist does not always play nice. On Paul Hindemith's "Second Piano Sonata Movement I: Massig Schnell" Baboian hits the overdrive, blowing dust everywhere. The trio cooperates well on this craggy piece, never letting it spin out of control. Spin out of control? No, that is what happens Alexei Stanchinsky's "12 Sketches." Here, the trio becomes a power trio reminiscent of Billy Cobham's work with Tommy Bolin and the Jonas Hellborg-Shawn Lane collaborations. Piano Bench is a uniformly fine disc with everything to offer in pushing boundaries.