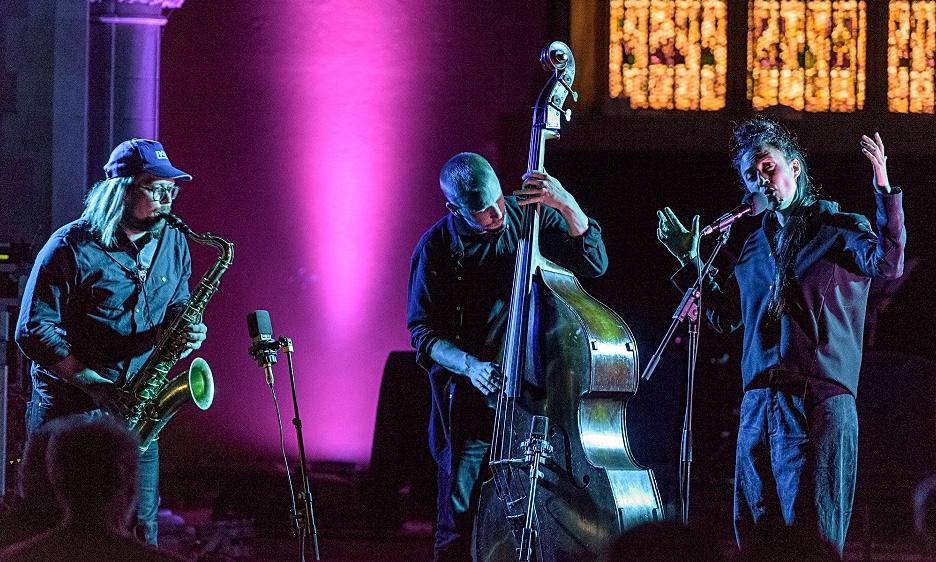 How powerful it is when people come together and think about the same sort of thing. A room full of people where everyone is actually listening to the same thing. There is great power in that also. There’s huge power in that. &#151Dan Nettles, Kenosha Kid

The May Bank Holiday weekend is always a festive occasion in Bray, but this year was of particular note as the Bray Jazz Festival celebrated its twentieth anniversary. Founded by Dorothy and George Jacob in response to a government call for projects to commemorate the new millennium, Bray Jazz Festival has earned a reputation in its first two decades as one of the finest boutique jazz festivals in Europe.

Bray Jazz Festival's success lies chiefly in the quality of its programming, which, as BJF's directors Dorothy and George Jacob acknowledged in an interview with All About Jazz, has been steered artistically since the beginning by Improvised Music Company—foremost in the field of jazz/improvised music promotion in Ireland.

Many of the most important jazz musicians from both sides of the Atlantic have graced BJF over the years and this year was no exception, with headliners representing traditions from straight-ahead jazz, soul and blues to ECM chamber intimacy. Fittingly too, the twentieth BJF featured one gig that simply wouldn't have been possible—or perhaps even imaginable— two decades ago.

Yes, just as the passing away of artists who have illuminated previous editions of BJF, such as Andrew Hill and Tomasz Stanko, or the arrival of fresh new talent such as Marius Neset or Laura Jurd, have marked the passage of time, so too have technological advancements in instrumentation, the manipulation of sound and an ever-wider sonic vocabulary at musicians' disposal.

BJF 2019 was perhaps more stylistically diverse than ever before, more surprising and more provocative. It was, in many respects, a weekend to remember.

It was on a sad note that BJF 2019 got underway, with ill health preventing Senegalese kora maestro Solo Cissokho from teaming up with Lithuanian kanklės player Indrė Jurgelevicuite. Their duo album Solo & Indrė (One Root, 2017) was a delightful affirmation of Afro- European musical affinities, and the intimacy of Bray Town Hall would have been the perfect setting for their musical dialogues. However, from problems arise opportunities, and replacement kora player Kadialy Kouyate did not disappoint. Unfamiliar with each other's compositions, the two musicians each played a forty-minute solo set.

The kanklės is a zither-like instrument dating from the sixteenth century, variants of which are common throughout the Baltic states. The name is believed by some linguists to mean 'singing tree.' Whether accurate or not, the poetry in such a derivation fitted nicely with the ethereal sounds—plucked, mediated and sung—by Jurgelevicuite in Bray Town Hall. She began by wishing Solo Cissokho a speedy recovery before launching into a programme of Lithuanian pre-Christian folk songs inspired by nature.

The spirits of flowers, stones and animals, and the connectivity between people and nature inherent to animism, Jurgelevicuite explained, lay at the heart of her songs. A fine voice, unadorned by vibrato, complimented her exquisite playing—gently lulling on one hand, subtly uplifting on the other. Aided by a tiny electric whisker on one number and two resonating devices on another, all of which widened the sonic possibilities of the kanklės' strings, Jurgelevicuite wedded modern technology to Medieval craftsmanship to beautiful effect.

A song about a garden in winter where rabbits' legs are too short to jump in the snow was followed by another describing two flowers competing for beauty stakes. On the latter, Jurgelevicuite's simple plucking and plaintively sung melody were not a million miles away from West African kora tradition. Resonator drone underscored a haunting vocal number where the kanklės was subdued, Jurgelevicuite intermittently releasing soft cries, bird-like then yearning, through cupped hands.

The recorded voice of one of Jurgelevicuite's vocal teachers—an elderly villager whom she described as a repository of traditional folk songs—introduced a lilting song of magic realism, whereby a beautiful young girl shapeshifts to escape the amorous intentions of an older man. For the encore, Jurgelevicuite sang of a shepherd hurrying his flock so he can return to his family, her yearning vocal and swirling arpeggios combining dreamily.

No sooner had the applause faded for Jurgelevicuite than Kadialy Kouyate took to the floor, there being no elevated stage in the Town Hall chamber. For the past decade Kouyate has taught kora at London's SOAS, and has gained a world-wide reputation as a virtuoso performer, even enjoying a taste of global chart success on Mumford and Sons/Baaba Maal's 2016 collaboration "There Will Be Time."

Mainly presenting songs from Na Kitabo (KKSOUND ARCHIVE, 2016), Kouyate began with thoughts for Solo Cissokho before launching into "Peace," his warm, earthy voice alternating with brief rushes of tumbling notes. Fascinating Kouyate's technique, whether engaged in flowing two-handed polyphony or pursuing more measured lead melody with rhythmic accompaniment. His captivating solo on "Hope," conjured dashing flamenco and soulful desert blues, and his poetic evocation of the heaven's opening on the intro to "Rain," proved to be set highlights.

Yet at the heart of Kouyate's music was the song itself. For all the spellbinding qualities of his kora playing it would be no great leap of the imagination to imagine these tunes sung unaccompanied; titles such as "Rain," "True Love," "Modesty" and "Pray for Love"—a new song—were suggestive of timeless oral traditions, and in these most turbulent times, something of a personal manifesto from this most lyrical Senegalese griot, for a better world.

A festival director's lot is not always an easy one. "Everything is great as long as everything is going fine," festival co-director George Jacob told the audience gathered in the Mermaid Arts Centre for the evening's headliner. Unfortunately, at very short notice, Fred Hersch was forced to cancel this and several other dates of his European tour due to illness. Bray Jazz Festival, however, has never cancelled a show in twenty years, and with Hersch's help, managed to secure the services of Marc Copland—another major exponent of jazz piano of the past forty years.

In a set dedicated to Hersch's speedy recovery, Copland began with Scott LaFaro's impressionistic and quietly majestic "Jade Visions," one of the last tunes the bassist wrote before his death in a car crash in 1961, aged twenty-five. Copland owes something of a debt to pianist Bill Evans, though like Hersch, has evolved his own distinctive sound. Copland's "Day and Night" highlighted the pianist's complex weave of rhythmic and melodic lines, his left hand constantly stirring as his right flowed freely.

Copland's improvisations, circuitous yet assured, unpredictable yet melodically grounded, had a hypnotic effect, pulling the listener in for the duration. The pianist's personal stamp, however, was just as marked on the most familiar of tunes, such as Rodgers & Hammerstein's "My Favorite Things," immortalized in the jazz cannon by John Coltrane's epic renditions. Copland's slow reading was almost classical in character, though imbued with eerie, dark tones. "Vignette," from Gary (Illusions Music, 2019), paid tribute to long-term collaborator Gary Peacock, with the pianist steering the bassist's tune through abstract turns to more melodically defined, yet still challenging terrain.

The late John Abercrombie's "Ralph's Piano Waltz" saw Copland at his most inventive, his melodic variations tightly bound to a pronounced rhythmic pulse, giving the impression of control and freedom in tandem. Copland's set was perhaps tilted in favor of impressionism and abstraction—with a strong rhythmic current nevertheless ever- present—so it came as a resolution of sorts when he encored with "Love Theme from Spartacus," Alex North's much-covered composition from Stanley Kubrick's film Spartacus (1960). Copland's Satie-esque interpretation of the bitter-sweet melody closed an emotionally intense performance on a reflective, gently blues-tinged note.

The brilliantly illuminated stained-glass window in The Well—the refurbished Cornerstone Church—formed a striking backdrop to Fire!, the Swedish trio of Mats Gustafsson, Johan Berthling and Andreas Werliin. The illumination came from a spotlight discreetly set in the graveyard before the church, adding an appropriately gothic edge to the trio's dark, industrial jazz-grunge.

Festival goers were conspicuous on Bray High Street, hurrying with intent from Copland's gig in the Mermaid to catch Fire!, gigs which overlapped by a few minutes. The impact of suddenly entering Fire!'s raucous sonic world, particularly with Copland's lyrical reading of "The Love Theme from Spartacus" still running inside the mind, was akin to entering a church service only to find Lemmy at the pulpit, stage-smoke curling around him, as Motorhead strike up "Ace of Spades."

There was indeed something Lemmy-like in Berthling's metal-heavy ostinato on "The Hands," the title track from the band's eighth album -a gruff-edged intensity that was at the heart of the music in general. Gustaffson's growling baritone saxophone spun off the bass riff , his unhurried phrasing punctuated by overblowing squeals and howls. All the while Berthling's unswerving bass ostinato and Werliin's driving skin and cymbal pulses drove Gustafsson on, his freedom contrasting with the mantra-like rhythm. More striking still were Gustafsson's braying, rasping cries and machine-gun punctuation on the slow dirge, "When her Lips Collapsed," built once more on a relentless bass riff.

Gustafsson's intermittent electronic sound-scaping altered the group dynamics, but much of the tension in the trio came, paradoxically, from Werliin's relevant restraint; when Gustafsson was in full flight on baritone—occasionally switching to tenor or bass saxophones—the expectation of equally ferocious drum fusillades was ever-present, and yet, Werliin, for the most part, stuck to uncluttered rhythmic patterns. Together with Berthling's minimalist grooves, drummer and bassist formed a doomy, rock-solid platform that permitted Gustafsson plenty of space to roam, akin, in a more bullish way, to saxophonist Nik Turner's free-jazz improvisations in Hawkwind's psychedelic rock heyday of the early 1970s.

The slow, circular riff of "Up and Down" signaled the home stretch, with some final fireworks before the trio locked together on a punchy motif that eventually dissolved. Lemmy, you feel, would have loved Fire!

In a fine collective performance, there was plenty of room for soloists to shine, with alto saxophonist Yuzaha O Halloran, tenor saxophonist Peter Dobai and trumpeter Bill Blackmore especially notable. Memorable, the octet's interpretation of all-rounder Chris Byar's highly original arrangement of "Over the Rainbow," whereby the melody slowly filtered through the intertwined voices. The crowd in the Harbour Bar voiced its approval with loud applause and cheers. Guilfoyle, who leads a number of outfits, rocked BJF a few years ago with his Latin jazz ensemble. An indefatigable figure on the Irish jazz scene, BJF is always the richer for his presence, whatever line-up he happens to be leading.