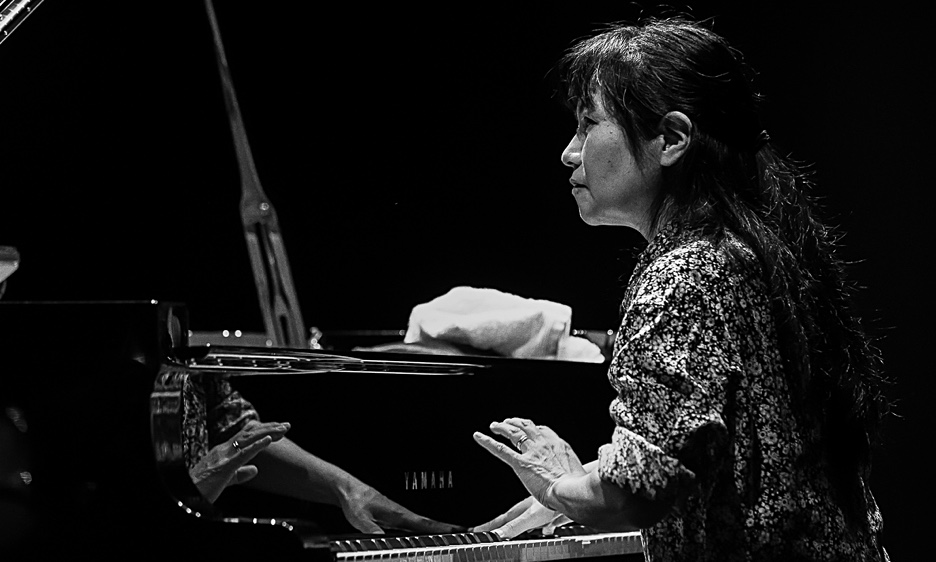 By KARL ACKERMANN
January 4, 2019
Sign in to view read count

My grandmother…told me that she heard some beautiful music all the time after she had lost her hearing. I asked her to explain but she couldn't. I would like to make…the music that nobody has heard before. —Satoko Fujii

In the first two parts of this series we looked at the origins of jazz in Japan and its adherence to the American style of composing, arranging and playing. Though jazz has been popular in Japan from the earliest days, it was—as in the United States—hardly met with unanimous approval in a country that prized classical and indigenous folk music. Yamada Kôsaku, Japan's best-known composer and conductor of the '20s through the '40s, disparaged jazz as "noisy and obscene." The American press was often critical of early jazz, so some perspectives in their second-hand reporting of the phenomenon in Japan are likely to be biased. The Japanese press's reaction to the music likely rose and fell with political prescriptions but direct documents are inaccessible. Some reactions are described in archival newspaper passages.

In its article "Jazz Interests Japan More Than League," The New York Herald of April 11, 1921 said "Infection of Frivolity Spreads Over Country...American jazz is making the world safe for dance maniacs...Human beings are after all a frivolous bunch, and apparently take greater delight in the 'shimmy' and fox trot than in a discussion concerning the world peace and democracy. At least, this is what is taking place among the people of the Mikado's empire." Washington, DC's Evening Star of November 30, 1924 reported a "Ban On Jazz In Japan...Following the closing of all dance halls, Tokio [sic], Japan, banned all jazz music, starting the drive by confiscating all known phonograph records of jazz." The same newspaper's edition of November 18, 1930, reporting on "Jazz In Japan," notes that "Japanese jazz, founded upon the American article, has been raging in the islands of the Rising Sun. Educators and thinking persons of the country are becoming alarmed...many Japanese girls have developed a fondness for all the flapper ways..."

The immediate post-World War II years saw a rapid comeback of jazz music and a mirror reaction from cultural spheres of the '20s. These criticisms were buffered by the American occupation of the islands. By the late '50s native artists appeared with more frequency and the American brand of mainstream jazz shared the stage with hard bop, emerging free jazz and avant-garde music. Drummer Hideo Shiraki became a well-known hard bop player in the '50s and '60s, later becoming one of the first Japanese musicians to incorporate traditional music into his compositions. Pianist Yosuke Yamashita employs his hybrid of free and modal jazz, and has led a group with bassist Cecil McBee, drummer Pheeroan AkLaff and saxophonist Joe Lovano. In 1973, Yamashita made a personal statement when he performed on a piano while it was engulfed in flames. Pianist Masahiko Satoh began recording in the '60s and has worked with Anthony Braxton, Joëlle Léandre, Peter Brötzmann, Ken Vandermark and Paal Nilssen-Love. Pianist Makoto Ozone recorded extensively with Gary Burton, Teruo Nakamura, and Roy Haynes. Many of these Japanese artists have studied in and migrated to the United States. Multi-instrumentalist, composer and bandleader Satoko Fujii has maintained a home in Tokyo and New York while covering much of the globe.

Fujii is one of the leading composers in music, a unique voice on piano and accordion, and a seemingly endless source of ideas. Constantly experimenting with concepts, timbres, and techniques, her music is genre-less and fearless. The Tokyo native began playing piano as a toddler and studied classical music through her teen years. In 1985 she began studying at Boston's Berklee College of Music and returned to Boston in the mid-'90s to study at the New England Conservatory. Her mentors at NEC included George Russell, Cecil McBee, and Paul Bley. Bley played piano duets on Fujii's debut release Something About Water (Libra, 1996). The following year she formed her New York trio with bassist Mark Dresser and drummer Jim Black releasing seven albums. With the addition of Fujii's husband, trumpeter Natsuki Tamura, in 2004 the trio transformed into the Satoko Fujii Four.

Fujii and Tamura embarked on their ongoing duo formation near the end of the '90s. Occasionally referred to as the NATSAT Project, the pair have released six albums on Libra: How Many? (1997), Clouds (2002), In Krakow, In November (2006), Chun (2008), Muku (2012), and Kisaragi (2017). For all the warmth of these ventures, Fujii and Tamura are masters of technique and do not approach their music with an aspiration of accessibility.
During that time, Fujii also formed her namesake quartet with Tamura, bassist Takeharu Hayakawa, and drummer Tatsuya Yoshida. At the same time Fujii and Tamura joined trumpeter Itaru Oki's sextet with saxophonist Keizo Nobori, bassist Hiroshi Funato, and drummer Jin Mitsuda. Both Fujii's quartet and Oki's sextet play a unique synthesis of jazz, rock, blues and traditional Japanese folk.

Fujii formed The Min-Yoh Ensemble in 2006, which included Tamura, trombonist Curtis Hasselbring, and accordionist Andrea Parkins. This quartet specialized in melding improvisation and native Japanese influences. In 2007, she established Ma-Do, another quartet playing in a warmer setting. In 2013, she formed the Satoko Fujii New Trio. Her undefinable but largely abstract quartet Kaze released their first album in 2011, later expanding with dual pianos and drums into the band Trouble Kaze.
While recording in over two dozen formations may seem to be the picture of structural uncertainty, Fujii's personnel—particularly in her large ensembles—tell a different story. The composer's open style of improvisation extends to her band members and benefits from a core rotation with a lengthy history supporting her. In the mid-'90s, Fujii's Orchestra New York and Orchestra Tokyo were playing the same selections while the bandleader was noting their different readings. Her knowledge of each musician's sound and style leads her to compose with the particular strengths of her various groups in mind. Over the past two decades, Fujii has amassed a catalog of one-off and limited projects. She has recorded and performed with Myra Melford, Misha Mengelberg, Mark Feldman, Carla Kihlstedt, Joe Fonda and several other artists.

A Life in Music

Interviewing Fujii in early 2018, she began by recalling how her mother acquiesced to young Fujii's request to bypass kindergarten for a music education. "My mother is a music lover who enjoys classical music, especially opera. So music was already there when I was born. I was very shy and couldn't play with other kids when I was little. I asked my parents not to let me go to kindergarten. My mother put me in a piano class instead because she thought it was better for me to have some social connection rather than just staying home. Before I started classical music, I had improvised with a piano in my home. I had great time improvising. I could improvise forever imaging many stories. After I studied classical music for ten years, I could no longer improvise. I couldn't play anything if I didn't have music in front of me. I was very shocked because I remember what a great time I had improvising when I was little. I felt like a well-trained dog that could do anything by command but nothing spontaneously. I stopped playing piano for a while and started improvising using my voice. It was easier for me because I didn't feel like I had to play in the same way as my education. Around the same time, I started listening to jazz and went to many jazz clubs. I became a big fan of Fumio Itabashi, a great Japanese jazz pianist. I remembered how much I loved playing piano. I asked him for some lessons. Since jazz is music with a lot of improvisation, I thought that might be good music for me because I wanted to improvise."

When Fujii was in her twenties she moved to Boston to study at Berklee and then at New England Conservatory. "I entered Berklee when I was 26. I took an airplane for the first time, left Japan for the first time, and I had a big cultural shock! At the same time, I found some American ways that helped me play music. Americans encourage by saying something good. Japanese people don't do that as much. Japanese people and culture are very humble. They point out things we cannot do, instead of what we can do and saying good things. Making music in America was easier for me than in Japan."

After Berklee, Fujii played straight-ahead jazz at local clubs. When asked if she was content playing traditional jazz early in her career or eager to set her own course from the beginning, she responded "From the beginning of my jazz experience, I always loved free-form jazz. When I was in high school, I began to listen to jazz. I couldn't enjoy bebop but I was so moved by John Coltrane's A Love Supreme. Before Berklee, I was already a professional musician in Japan, playing in cabaret house big bands that played Count Basie and Duke Ellington. So I was already playing traditional and straight-ahead jazz. When I graduated from Berklee, I tried to do everything, playing in many styles. But I always loved free-form jazz and improvised music."

Fujii's first solo recording, Something About Water (Libra, 2008) included duo performances with her former teacher, Paul Bley. "Studying with Paul Bley was the biggest thing for me. I studied with him for two years but we spent more time talking than playing piano. Talking with him changed my ideas one hundred percent. I began to feel much easier playing my music and accepting myself. My husband Natsuki Tamura is also a big influence. He has a very different way to make music and is totally free. We have the same values but are still very different."

Fujii uses elements of melody, free improvisation, extended techniques and silence whether she is composing for one of her orchestras, for duos with Tamura, or formations that fall somewhere between. Her approach to composing in those different settings is wide open. "I don't like to limit myself when I make music. I don't take a different approach for different groups. I like to use whatever I want in any format." Her compositions often begin with only minimal structures and she then trusts her fellow musicians to develop their own ideas around those structures. "I trust my collaborators one hundred percent and I like to hear how they play my music. Most times, I enjoy whatever they play. I am not worried what is going to be. I just have strong ideas and great musicians can feel and share them."