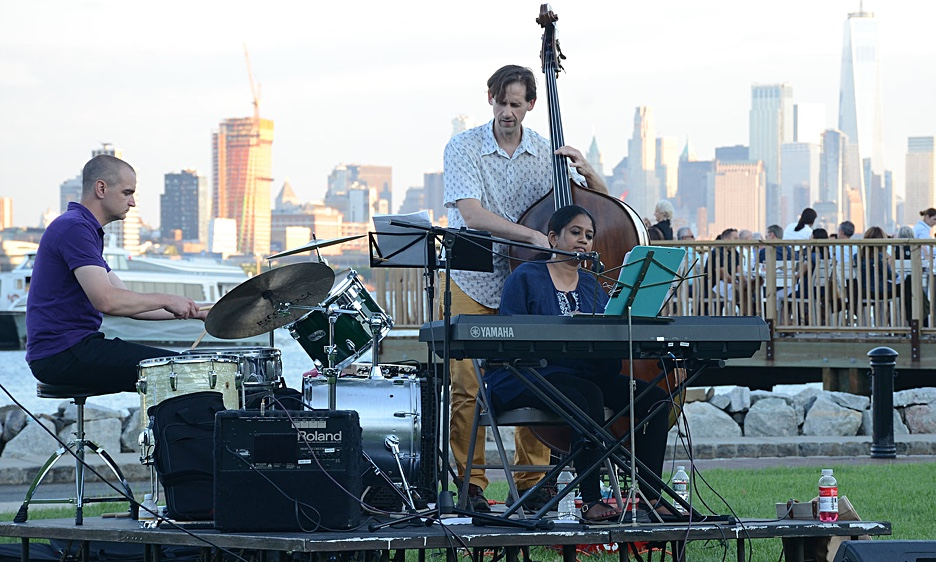 By Charu Suri
January 4, 2019
Sign in to view read count
About Charu Suri

Born in South India, Charu Suri started playing the piano at the age of five, and also studied the veena as well as Carnatic music (vocals). A concert pianist since the age of nine, Suri has performed in several venues in India, including Chennai, Mumbai and Delhi, as well as in the United States and Europe. She won an international piano competition at the age of fifteen, started composing at a very young age and continued her musical studies at Princeton University and Manhattan School of Music. Her piece for lyric soprano was performed by a chamber ensemble at Princeton with Yo Yo Ma and Edgar Meyer, and she recently composed and released a jazz album, Lollipops for Breakfast, which won a Global Music Award.

After years of classical music training, she fell in love with jazz and formed a trio with Suri on the piano, J. Brunka on the bass, and Jay O'Brien on the drums. The trio regularly performs at various venues including New Jersey where she resides, The Lexington Hotel in New York City, and at St. Johns in the Village.

The Dutch composer Louis Andriessen was both a teacher and a strong influence because he really emphasized individuality, and how a composer should always really listen and stay true to oneself—both in terms of musical ideas and harmonies/improvisations. I've been fortunate to study with some world-class musicians Edgar Meyer, whom I met briefly and was very impressed by. As a child, I was smitten with Debussy and loved impressionism; later, when I fell in love with jazz, I was always taken by the playfulness of Dave Brubeck, the lyricism of Bill Evans, the rhythms of Thelonius Monk and the nuanced orchestrations of Henry Mancini.

I listened to my first records (Beethoven's "Pastoral Symphony" and Bach's "Well-Tempered Clavier") at the age of five and just fell in love with the simple elegance of the music. At that time, living in Africa, I had access to a piano and couldn't stop playing—my parents often had to force me to stop practicing and get some sleep.

Your sound and approach to music. I love music that has a sense of play and compositions that continuously surprise the listener. I really love lyricism in music and the power of simplicity, which is often hard to achieve. Music should not sound forced or trying too hard to impress. Some of my Carnatic upbringing in India manifests itself in my music, and there are parts of my recent album that are inspired by modes and Indian ragas. Since I had the good fortune to study both Indian and classical music (and performed so much Bach, Mozart, Beethoven and Chopin in my youth), I love a certain lyrical virtuosity in jazz.

I try to give my students a firm foundation in theory and practice. I teach many young kids and want them to know how to read, transpose and sight-read music, and also develop a strong sense of pitch. And then I let their creativity and their aural uniqueness guide them because it is very important to cultivate a sense of style from an early age. It is important to let kids embrace their strengths and encourage them to take risks, while letting them appreciate each genre for what it is. Your dream band While I would love a big orchestra, with a chorus, percussion and some unique instruments including the santoor and the veena, I enjoy writing music for a more intimate chamber group. I really love the transparency of a trio but would love to grow the ensemble a bit more—to even a sextet, adding more textured strings and also voice. One of the artists I'd love to work with is guitarist Al Di Meola, who has such a brilliant breath of work and virtuosity. And I'm a big admirer of Bela Fleck. The banjo is not an instrument I gave much attention to while growing up, but of late I've been enamored by the early work of Mumford & Sons and the Flecktones. As a child, I loved plucking the strings of the Saraswathi veena, and even today I dream of doing a jazzy version of Bach's "Air on a G String" on a veena because it sounds so different than the traditional violin version. Sounds and textures are what really get me excited, apart from lyricism and a great melody.

At one of my early outdoor performances—one of my first with a digital keyboard—I had no idea how to plug the cords to the speaker and I fumbled and patched the wrong ones and had no idea that there was absolutely no sound from the speaker for the first few minutes into the performance. I think the audience thought I was playing some version of John Cage. And then when we finally fixed the issue, I felt so embarrassed, but we had a good laugh.

Favorite venue I really like performing at the 100-seat church, St. John's in the Village, which has one of the best Yamaha concert grand pianos I've performed on. The acoustics of the building which was designed by Edward Tafel (a colleague of Frank Lloyd Wright) just lets the music soar, bird-like, and the resulting timbre is perfect for a trio setting (you can hear a pin drop!). Our next performance there will be on Valentine's Day.

I am quite fond of "Raga Tala" which is the first piece on the album because it ended up sounding quite different than the rest, in a good way. It was an experiment of mine to use one of the Indian ragas (in this case, Bowli, which is a morning raga) as the base for a jazz piece and I just ended up letting it ride. The double bass imitates the strum of the open fifths that many Indian singers often use in the sruthi box that are brought onstage to accompany them, and it ended up giving the piece an entirely different sound and feel.

I am working on another album, called The Book of Ragas (at least, that's my working title as of now) that are jazz etudes of several Indian scales and I'm finding them really rewarding because they allow me to combine my strengths by playfully borrowing both from the East and the West. I think the image of a "standard" jazz ensemble is loosening in scope and dimension, and the addition of new instruments can add to the texture and the sound of jazz in a positive way. That's what I think I would love to focus on and contribute now, and in the future I also want to explore, for example, the way covers can sound different by playing with the instrumentation.

I absolutely love rock and pop music and am the biggest fan of The Beatles and Billy Joel. Our band even did an entire jazz tribute to the Beatles this past year.

The Ray by Ray Charles (Quincy Jones). I love the depth of his playing and to this day, he is one of my biggest influences.

I think there some truly terrific artists today and the ease of access (through self-produced albums, Spotify etc.) is a great boon to creativity. But I also think the term "jazz" is a word used to describe so many types of music that don't neatly even fall into the genre. I think it is important to develop your own voice and repertoire and I'm happy to see so many artists breaking the mold and forging their own identities and path. But there needs to be more funding and grants made available to musicians, especially to those starting out. The amount of royalties paid to musicians through popular channels (e.g. Spotify) are not sustainable and they can harm creativity. There are so many voices out there who deserve to be heard, all over the world.

A strong and supportive, impartial community. Also, good mentors, which I think are hard to find!

My next album, The Book of Ragas, as well as tours in various U.S. cities including Miami in early April. I am also composing the music for a film that will debut next year, as well as the music for a gala in the spring. Plus, many concerts in New York City and beyond, as well as a few festivals. It will be an exciting and jam-packed year for sure!

The fear that I'm not giving my all. To be emotionally ready for a performance involves a calm mindset, and sometimes when I am flustered and am juggling many things, my fear is that I won't be able to give 1000% to the music that it deserves.

Ha! That's a good one, I haven't even thought about that. Something joyous and light, like the "Ballad" from my first album, or Vince Guaraldi's most excellent "Charlie Brown" pieces. I absolutely adore Guaraldi.

What is your favorite song to whistle or sing in the shower? Moon River.

By Day: I'm a freelance journalist. So, I travel around the world writing stories about various destinations for publications from Architectural Digest, The New York Times to The Wall Street Journal. It's given me great perspective but has left me immensely humbled. We live in an amazing world filled with creative, resilient people.

A writer or a tour guide.

Albert Einstein. I have lots of questions for this humane genius because he was prescient and magnanimous.

I love the creativity of Montreal, the energy of New York City, and the sheer gorgeousness of Wanaka in New Zealand. That's probably where I would love to retire, to be at peace with nature and the mountains.