Mark Dresser (b. 1952) has been composing and performing solo contrabass and ensemble music professionally since 1972 throughout North America, Europe and the Far East. Emerging from the L.A. "free" jazz scene of the early 70's, Dresser performed with the "Black Music Infinity", led by Stanley Crouch, and included Bobby Bradford, Arthur Blythe, David Murray, and James Newton. Concurrently he was performing with the San Diego Symphony. After completing B.A. and M.A. degrees at UCSD where he studied with contrabass virtuoso Bertram Turetzky and a 1983 Fulbright Fellowship in Italy with maestro Franco Petracchi, Dresser relocated to New York in 1986 after being invited to join the quartet of composer/saxophonist, Anthony Braxton. Dresser played with Braxton's longest performing quartet for nine years.

Once in NY, Dresser began working with a wide variety of musicians in the greater New York community including Ray Anderson, Tim Berne, Jane Ira Bloom, Anthony Davis, Fred Frith, Dave Douglas, John Zorn, and others. He focused on composing for a pair of cooperative groups, Tambastics with flutist Robert Dick, percussionist Gerry Hemingway, and pianist Denman Maroney and the string trio, ARCADO, with violinist Mark Feldman and cellist Hank Roberts. Numerous European tours, awards, six CD's, and several commissions resulted, including "For Not the Law," a composition for ARCADO and orchestra from WDR Radio of Cologne Germany, "Armadillo" for ARCADO and the WDR Big Band, and "Bosnia," a work written for the Trio du Clarinettes of France and ARCADO.

His current collaborative projects include the trio, C/D/E, master drummer Andrew Cyrille and with multi-reed player virtuoso, Marty Ehrlich, a duo, trio and quartet with hyperpianist, Denman Maroney, the Marks Brothers with fellow bassist Mark Helias, a duo with the cello virtuoso, Frances-Marie Uitti , a duo with the gifted drummer Susie Ibarra, and a duo with celebrated trombonist, Ray Anderson, .

Commissions include, “Resomance” for Quarter tone flutes and String Quartet written for Matthias Zieger (2004), “The Five Outer Planets” for amplified contrabass written for the sculptures of Robert Taplin, “Remudadero” for the saxophone quartet, Rova, "Banquet," a double concerto for various flutes, contrabass and string quartet written for Swiss flute virtuoso Matthias Ziegler.(Tzadik CD-1997), "Air to Mir," commissioned by the McKim Fund in the Library of Congress (Marinade-Tzadik CD-2000.) Also "Althaus" for tuba virtuoso, David LeClair with bass, cello, alto sax, and clarinet is recorded on Marinade, “For Not the Law” for Arcado String trio and West Deutsch Rundfunk Orchestra.

A chapter on his extended techniques for contrabass, "A Personal Pedogogy," appears in the book, ARCANA (Granary Books). Other articles on this research appear in DOWNBEAT, MUSICIAN MAGAZINE, & JAZZIZ.

He has performed and recorded over one hundred CDs with some of the strongest personalities in contemporary music and jazz including Ray Anderson, Tim Berne, Jane Ira Bloom, Bobby Bradford, Tom Cora, Marilyn Crispell, Anthony Davis, Dave Douglas, Fred Frith, Diamanda Galas, Vinny Golia, Earl Howard, Oliver Lake, George Lewis, Misha Mengelberg, Ikue Mori, James Newton, Evan Parker, Sonny Simmons, Louis Sclavis, Vladimir Tarasov, Henry Threadgill, and John Zorn. He was nominated for a 2003 Grammy for the performance of Osvaldo Golijov's CD, Yiddishbbuk. (EMI). He has given lecture demonstrations at the Julliard School, Princeton, New England Conservatory, National Superior Conservatory of Paris, Conservatory of Amsterdam, UCSD, and many others. He has been on faculty at New School University, Hampshire College, and was a 2004 Lecturer in the Council of Humanities and Department of Music at Princeton University. He is professor of music at UCSD. Show less

Bert Turetzky and Mark Dresser in concert Together!


"Mark Dresser is an inventor. He also may be the most important bassist to emerge since 1980 in jazz or classical music."

"Mr. Dresser, a bassist who is one of the great instrumental forces in recent American jazz outside of the mainstream..."

"Dresser's Music distinguishes itself, as was also heard in his solo work, "Invocation" by ingenuity and originality in the sound production, in addition, by fascinating sound atmospheres."

"Mark Dresser is an inventor. He also may be the most important bassist to emerge since 1980 in jazz or classical music."

"Mr. Dresser, a bassist who is one of the great instrumental forces in recent American jazz outside of the mainstream..."

"Dresser's Music distinguishes itself, as was also heard in his solo work, "Invocation" by ingenuity and originality in the sound production, in addition, by fascinating sound atmospheres."

"He has proven to be one of the master bassists of modern jazz, perhaps even the most exciting....his improvisational fecundity was remarkable for its veritable ensemble-in-miniature, in which every orchestral maneuver can be deployed to advantage... Dresser's rhythmic mooring, melodic liquidity, and timbral hues showed how sanguinely he absorbs and adapts available contexts, emotionally and generically. The almost palpable physicality of his pizzicato slaps and pedal plunging, the luxuriant tremolos of his arco passages and refrains, were as identifiable as the calling cues we associate with elder bass paragons."

"Mark Dresser is a bassist and composer of the highest order. On this recording of his "notated" chamber music, he presents two challenging works that are artistically interpreted. His creativity and sonic sensibilities need to be heard. This project, the assemblage of musicians, and this label make an important statement about the creative process... The performance is intriguing, engaging and profound. "

Bass World , The Journal of the International Society of Bassists 1998 review of Banquet CD-Tzadik

"To an experienced reviewer, it doesn't happen too often that the music makes you speechless. It might be due to the genre of the silent movie that its music is hard to verbalize; maybe the film itself can possibly describe this wonderful music. Mark Dresser not only pays homage to a great German movie and its expressionist director, Robert Wiene, but also makes a statement about Neo-Nationalism and the current ethnic cleansing all over the world...This is the masterpiece of a masterful musician..."

"You've got to pity Dresser's poor bass-you wouldn't treat a dog the way he manhandles his instrument. But the gnarled tones and vicious swing he tortures out of it are worth the abuse. In Dresser's slanted compositions, the jazz tradition is only so much grist for the mill."

"Mark Dresser awed the assembly with his compositions for solo bass-no one expected to be nailed to the floor by one guy with a four-string."

"Mr. Dresser, who constantly drove the group forward with his full, wide-bodied sound, would solo, hammering strings with both hands, creating the sound of several basses playing at once."

"In terms of the soloist/accompaniment dichotomy, Dresser explodes the notion of the bass as both single instrument and back-up instrument. His arco work takes on a progressively seamless singing quality while occasional overdubs allow pizzicato dancing around the bowed slipstream. Thus glissandi and pitch shifts are pocked and plunked and shoved in a sometimes delirious display of talent. But even when it's Dresser alone, sans overdubs, he's a feverish, fast-moving string group unto himself...I count this among the best anti-virtuosic solo recordings to date. Anti-virtuosic playing is, of course, historically a function of interrogating the inherited history of technique and beauty, and here Dresser presents an alarmingly tense and exciting technique and a sense of beauty as something not simply or clearly or calmly related but rather something for which all involved must work."

"Dresser has a heroic sound and his double-, triple-, and quadruple-stopped glisses are stunning. ...he should sustain his position as one of the few virtuosos of so-called avant-garde jazz."

about the premier of "The Banquet" September '95

"Mark Dresser who is able to jump over the highest stylistic walls in a single bound wrote a concerto that shows where this journey between contemporary classical music and jazz can go. Dresser wrote a piece of music that fits like a glove to the astonishing soloist, Matthias Ziegler. This piece has many element which you can't find anymore in "serious" music like drama, entertainment, rhythmic playfulness, variety of sound, and room for individual improvisational development."

"Mark Dresser's Promethean bass-playing powers one of the heaviest bands on the scene...Dresser consistently astonishes with his range of ideas and effects, not to mention his towering beat."

"Mr. Dresser, a bassist of dexterity and power, isn't content with dryly cerebral experimentation or some anachronistic idea of euphoria through tumult. He wants it all: timbral experimentation, pulsating rhythm, strong melodies, imaginative strategies for composing. ...his well-rehearsed group, swinging four-way cohesion was always the issue."

"Mark Dresser first came to national attention in 1985 as the bass player for Anthony Braxton's now legendary quartet. The band broke up in 1994 but Dresser continues to further the vocabulary of the acoustic bass through his eccentric and radical advancements in technique." 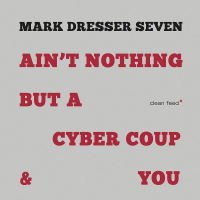 Ain't Nothing But A Cyber Coup & You

From: Ain't Nothing But a Cyber Coup...
By Mark Dresser

From: Sedimental You
By Mark Dresser

All About Jazz musician pages are maintained by musicians, publicists and trusted members like you. Interested? Tell us why you would like to improve the Mark Dresser musician page.