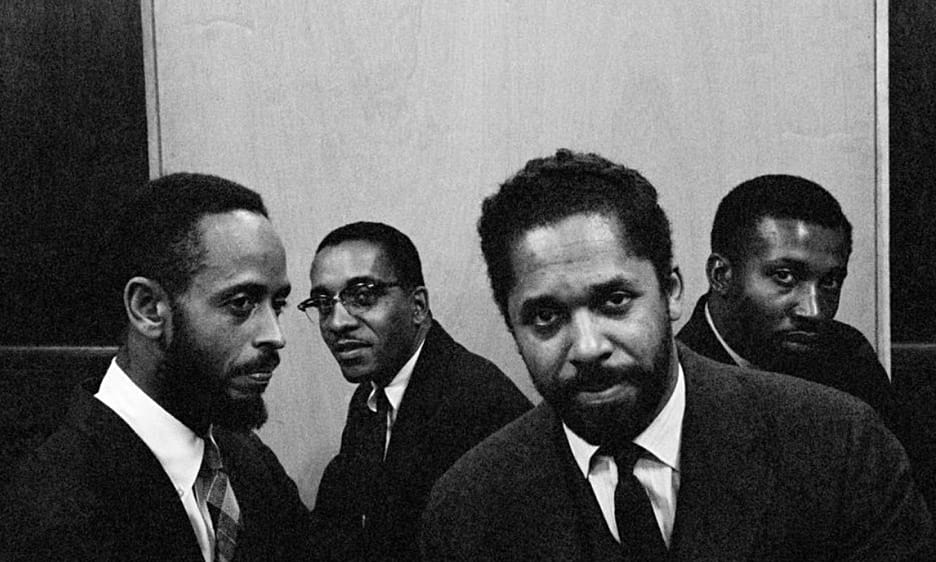 By KYLE SIMPLER
July 1, 2021
Sign in to view read count
There are plenty of fictional stories about utopian societies where life is good and everybody gets along. Of course, the word utopia literally means "no place," suggesting that an actual utopia is nothing more than an illusion, but that hasn't stopped people from trying. Although there are many utopian societies that didn't work, there are a few real world attempts that have come close. One such example could be The Music Inn in Lenox, Massachusetts. Even though it wasn't a utopian society in the strictest sense of the word, it was an idyllic summer getaway for musicians to play and learn from each other, and for many years, the Modern Jazz Quartet was at the center.

The film The Modern Jazz Quartet: From Residency to Legacy (2018) explores the group's involvement with Music Inn and their subsequent rise to fame in the jazz world. The idea for this project came from drummer and filmmaker George Schuller, who worked on the 2007 documentary, Music Inn, which examined the community's first decade from 1950-1960. After seeing a screening of that film, Schuller thought he could easily make a short film that focused on The Modern Jazz Quartet's association with the community. Rather than being a 10-to 20-minute bonus feature as he originally envisioned it, however, Schuller realized that there was much more to be said about this influential group, so he decided to create his own documentary.

The Modern Jazz Quartet: From Residency to Legacy offers a good deal of information about the group and The Music Inn, which was the brainchild of Stephanie and Philip Barber. The couple purchased the land in the Berkshires along with the buildings, which seemed an ideal location to establish a community for artists. Stephanie loved jazz and before long, jazz musicians would come to spend their summers in this beautiful country estate. Although the film discusses the community quite a bit, it mainly concentrates on the impact and significance of the Modern Jazz Quartet who were closely associated with Music Inn. With a mixture of archival footage and interviews, From Residency to Legacy offers an educational and entertaining overview of both the estate and these important musicians.

The Modern Jazz Quartet (MJQ) was founded in 1952 and included John Lewis on piano, Percy Heath on bass, Milt Jackson on vibraphone, and Connie Kay on drums. Kenny Clarke was the group's original drummer, and he is mentioned quite a bit during the film, but most of the focus here is on the Kay years. The quartet was greatly inspired by classical music, and they presented a sophisticated approach to jazz, which is not surprising considering that Lewis, who was the musical director of the group, studied classical music in graduate school.

The MJQ were regulars at the Music Inn, and even recorded albums there with Sonny Rollins and Jimmy Giuffre. Along with playing and recording music, another appealing factor of the Music Inn was the roundtable discussions. These discussions led to the formation of the Lenox School of Jazz, and Lewis was also the ideal candidate to serve as school's director. Along with Lewis, the school had an amazing faculty, which included the other members of the MJQ along with musicians such as Dizzy Gillespie, Oscar Peterson, Ray Brown, Jimmy Giuffre, Kenny Dorham, Bill Evans, George Russell, Herb Pomeroy and several other prominent jazz masters of that time.

The Modern Jazz Quartet: From Residency to Legacy includes numerous interviews from people who were involved with the Music Inn, including Percy Heath, John Lewis, Dave Brubeck, Ornette Coleman, Paul Bley, Gunther Schuller, Jim Hall and more. The result is a fascinating collection of remembrances and anecdotes that highlight the Modern Jazz Quartet's role in the Music Inn.

Percy Heath is one of the central figures here, and the film is even dedicated to him. His candor and sense of humor gives the film a distinctive charm. He is a natural storyteller, and there are plenty of great stories here. There's also some excellent private footage of him playing bass and cello.

While the Heath interviews are educational and enjoyable, the real focus is actually on John Lewis, and his dedication to music. One particular story shows how dedicated Lewis was in pursuing his musical education. Although he was already a professional musician, Lewis continued his studies, working on a master's degree at the Manhattan School of Music. One day, he asked fellow student Dick Katz if he could sit in for him at a Charlie Parker gig because he had to study for an exam. As Katz explains, studying for the exam was more important than playing with Charlie Parker.

The film also features sections focusing on Milt Jackson and Connie Kay as well. There are fascinating interviews with each of the members. There's also archival footage of the group performing live in different settings. The music featured shows the range of talent the MJQ had. Some of the selections are straight ahead while others are slightly more modern. There are even some classical pieces included. The sound of the Modern Jazz Quartet, as percussionist Harold Farberman explains in the film, is unlike anything else. It's subtle and refined, and there's a definite classical quality to their style of jazz.

The information isn't strictly limited to the MJQ however. One section discusses Ornette Coleman's experience at Music Inn. Coleman's work was groundbreaking to say the least, and he asked Percy Heath to play on one of his records. Heath told John Lewis that he needed to check out Coleman's work. After hearing him, Lewis had Coleman come to Music Inn to take part in the school. One problem Coleman had, however, was that he couldn't read music. This initially seemed to be a setback, but Lewis saw his potential, and Coleman quickly became an integral part of the program.

The idea of overcoming obstacles and breaking down boundaries is an essential aspect of the film. When the Barbers started the Music Inn during the fifties, they encouraged inclusion, and this was truly a place without racial or stylistic divisions. Music was all that mattered. As Schuller explains, this was also a time when "jazz was finally being recognized for its deep contribution to America's evolving culture and Music Inn was its centerpiece." The Modern Jazz Quartet embodied the community's spirit by incorporating a variety of influences into their music. It didn't matter whether it was classical, blues, or avant-garde, they could look beyond the surface to find the common ground. The Modern Jazz Quartet: From Residency to Legacy not only provides an exceptional overview of MJQ but also shows how effectively music can help bring us together.