Miho Sasaki Trio: From My Heart

BY DAN MCCLENAGHAN
July 1, 2021
Sign in to view read count 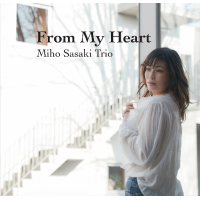 Japanese-born pianist Miho Sasaki put down some productive roots in the United States, studying piano with Donald Vega at SUNY Purchase College, where she earned a James Moody Scholarship. The challenges of the Covid-19 pandemic sent her back home to Tokyo, where she live streams her music and teaches online. But the challenges of Covid did not prevent her from recording and releasing her debut CD, From My Heart.

The first impression coming from the album's first spin is that—even though Japan is a long way, geographically and culturally, from the birthplace of jazz—Sasaki's music sounds American, as if the DNA of the Great American Songbook, jazz standards and the blues are embedded deep down in her bones. She and her trio open with the familiar "There Will Never Be Another You," starting out in a somewhat hushed and languid manner, laying down a loose groove while searching for a tighter one, certain it will coalesce. It does, after an initial improvisation on the theme which shifts gears in an eye blink, incited by a sharp snare drum hit, with bassist Yoshimisa Otsuka and drummer Yoshifumi Nihonmatsu gelling into a more assertive forward momentum which enlivens Sasaki and the entire trio dynamic.

Irving Berlin's "How Deep Is The Ocean" rolls the same way, a relaxed opening which moves into a relentless up-tempo romp, followed by the first of five Sasaki originals, starting with "Room 81," a buoyant sound that brings Ahmad Jamal to mind, in Sasaki's playing and composing. Asked about her influences, Sasaki said, "I basically like bebop pianists like Wynton Kelly, Barry Harris, Tommy Flanagan and Red Garland." The Garland mention seems especially appropriate as"Room 81" even includes—to go along with Sasaki's Garland-esque light touch and keyboard sparkle—a particularly deft arco bass solo by Otsuka, reminiscent of Paul Chambers approach, in his work in the Red Garland Trio.

Billy Strayhorn's "Lush Life" get a beautifully reverent treatment, with Sasaki sounding especially pensive, leading into "Struttin' With Some Barbecue," which was recorded by Louis Armstrong in 1927, and sounding here, in 2021, like a rollicking good time down on Bourbon Street.

Sasaki closes with her original, the disc's title tune, music fittingly titled to describe the pianist's purity of purpose and focused artistic vision on a fine debut.

There Will Never Be Another You; How Deep Is The Ocean; Room 81; Under The Water; I Wish I Were You; But It's Alright; Lush Life; Struttin' with some Barbcue; From My Heart.

Title: From My Heart | Year Released: 2021 | Record Label: Self Produced