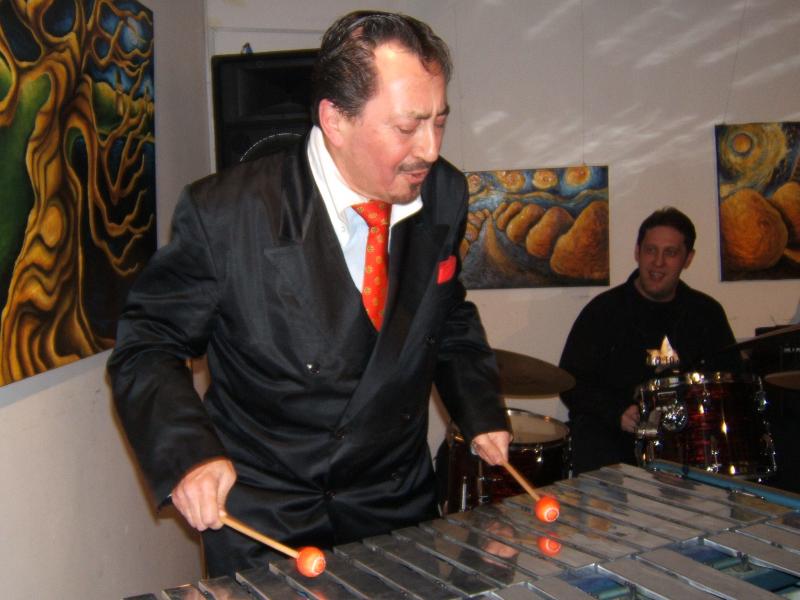 BY TOMMY VIG
October 24, 2011
Sign in to view read count
Meet Tommy Vig:
Born to a musical family in Budapest, Tommy Vig was internationally recognized as a child prodigy by the age of six, playing drums with his father, clarinetist Gyorgy Vig. His sense of improvisation, rhythm and energy at that young age made him unique, and he performed live concerts on radio, at the Budapest City Theatre, the Academy of Music in Budapest, and even the National Circus. At the age of eight, he made an album, called The World Champion Kid Drummer (Elite Special, 1946), with the best Austrian jazz players in Vienna, including Hans Koller, Ernst Landl and the Hot Club of Vienna. At the age of nine, his drumming won him the 1947 MGM-Jazz Competition in Budapest. As a result, he made several recordings with the legendary Chappy's Mopex Big Band (on His Master's Voice Label).

Vig completed his studies at the Béla Bartók Conservatory in 1955 and the Ferenc Erkel Music High School in 1956. Following the crushing of the Hungarian Revolution of 1956, he fled to Vienna, where he played concerts with Fatty George and Joe Zawinul. After moving to the United States, he was given a scholarship at Juilliard School of Music. Since then he has been writing and conducting his own concerts. Vig has worked with Red Rodney, Don Ellis, Cat Anderson, Terry Gibbs, Art Pepper, Milcho Leviev, Joe Pass, and the Miles Davis-Gil Evans Big Band, amongst many others. In 1961 he settled in Las Vegas, where he performed with Frank Sinatra, Sammy Davis Jr.,Tony Curtis, Woody Allen, Judy Garland, and Tony Bennett. He was the percussionist on many of Rod Stewart's albums.

In 1970, Vig moved to Los Angeles, where he worked in Warner Brothers, Fox, Universal, CBS, Columbia, ABC, Disney, Goldwyn, MGM, and Paramount studios. He participated in about 1500 studio sessions in Hollywood, including two Academy Awards, and produced, directed and conducted the official 1984 Olympic Jazz Festival for the Los Angeles Olympic Organizing Committee (LAOOC). He also organized and conducted the annual Las Vegas Caesars Palace Mini-Jazz Festivals for many years. He has written the music for 30 films and television shows, including They Call Me Bruce? and The Kid With the Broken Halo. As a percussionist, Vig participated in the recording of Quincy Jones' soundtrack to the Roots television miniseries. He played on the Jazz Festival Münster 1986 (album Mistral) with Lajos Dudas, and participated with the HR Jazzensemble and Martin Breinschmid.

Vig has given master courses at California State University, Northridge, and at the famous Tatabánya Jazz Academy. Over the past fifty years, his classical pieces were performed by symphony orchestras in the United States, Germany, and Hungary. He was the Vice President of the American Society of Music Arrangers and Composers (ASMAC). Vig was awarded the Hungarian Grammy by the State Radio in Budapest in 1994. The Hungarian Jazz Federation awarded him First Prize in Musical Arrangement in 2006, while the Budapest Jazz Orchestra commissioned and performed his piece, "Budapest 1956," in front of U.S. Ambassador April H. Foley and a capacity audience at the Museum of Fine Arts.

Since 2006, Vig has lived with his wife Mia (of the famous Kim Sisters) in Hungary, where they have been performing live concerts, appearing on radio and television, and recording several albums, including ÜssDob ("Beat It!") (Tom Tom), Now and Then (Pannon) and, most recently, Welcome to Hungary! The Tommy Vig Orchestra 2012 Featuring David Murray (Klasszikus Jazz). They have one son, Roger, who has already appeared on television in Los Angeles playing the drums with Vig's big band at the age of three.

I knew I wanted to be a musician when...
I was five, and watched my father play lead alto in a big band

Your sound and approach to music:
Influenced by Gene Krupa on drums, Lionel Hampton on vibes and Bartók as a composer.

Your teaching approach:
Understanding and inspiring.

Road story: Your best or worst experience:
Was playing marimba in the Gil Evans-Miles Davis big band, and Tony Williams was late for a rehearsal for a concert in Berkeley. The music for a brand new chart was put on the stands and Miles, without a word, simply pointed at me, so I sat down at the drums and played the new arrangement, which was written in 5/4 time, swinging the hell out of it; after all, how often does one get to play drums with Miles Davis?

In the break, Tony finally showed. By that time I was back behind the marimba. They called the new 5/4 chart again and Tony had a very hard time reading the music. Finally he got up and waving his part said to Miles, "The music is wrong!" Miles pointed at me and said, "That kid just played it; he had no trouble." Tony said, "Then let him play it!" But, of course, he finally learned his part, but I will never forget the thrill of playing with Miles and the fact that he liked me and my drumming.

Favorite venue:
Having my compositions performed at the Pavilion of the Music Center, Los Angeles, by Stan Kenton's Neophonic Orchestra.

Your favorite recording in your discography and why?
Welcome to Hungary, my most recent album, because I am happy with my compositions and because David Murray played the solos so well .

The first Jazz album I bought was:
Miles Davis, At Carnegie Hall with the Gil Evans Orchestra.

What do you think is the most important thing you are contributing musically?
New notes and new harmonies, but which are based on music I like—Dizzy, Monk, Mozart —in other words, creating a brave new world in a good and natural and swinging sense.

Reading this I just decided to title my next album, Tommy Vig: A Legend in His Own Mind :)

Did you know...
that I have a brown belt in Karate? This got a few people in trouble—including me sometimes—me especially when, after I kicked somebody, they did not go down.

How would you describe the state of jazz today?
Disturbing. To me, jazz-rock, fusion, ethnic jazz, world music, cross-over and so on are not following Hamp, Bird, Hefty, Trane, Ayler. The musical quality is low, and making money is confused with making music.

What are some of the essential requirements to keep jazz alive and growing?
Dizzy for President !

What is in the near future?
I was asked to write and perform in 2012 a Concerto for Vibraharp and Orchestra (my second) by the Duna Symphony Orchestra. The event will take place at the beautiful concert hall of the Duna Palace in Budapest.

By Day:
I was often told "not to give up my day job," especially by Buddy Rich, when I told him that, to me, he was one of the best drummers in the world. :). Luckily I never had a day job. :)

If I weren't a jazz musician, I would be a:
I am drawing a blank here...