Keith Moore Mitchell, better known as Red Mitchell, was an American jazz double-bassist, composer, lyricist, and poet. Red was raised in New Jersey by a father who was an engineer and loved music, and a mother who loved poetry. His first instruments were piano, alto saxophone, and clarinet. Although Cornell University awarded an engineering scholarship to Mitchell, by 1947 he was in the US Army playing bass. The next year he was in a jazz trio in New York City. Mitchell became known for performing and/or recording with Mundell Lowe, Chubby Jackson, Charlie Ventura, Woody Herman, Red Norvo, Gerry Mulligan, and, after joining the West Coast jazz scene in the early 1950s, with Andre Previn, Shelly Manne, Hampton Hawes, Billie Holiday, Ornette Coleman, and others

Genesis of Genius: The Contemporary Albums

Label: Contemporary Records
Released: 2022
Track listing: LP1 Something Else!!!!: Invisible; The Blessing; Jayne; Chippie; The Disguise; Angel Voice; Alpha; When Will The Blues Leave?; The Sphinx.

LP2 Tomorrow Is the Question!: Tomorrow Is The Question!; Tears Inside; Mind And Time; Compassion; Giggin'; Rejoicing; Lorraine; Turnaround; Endless.

For many an Ornette Coleman devotee, devotion was pledged with the singular saxophonist's The Shape of Jazz to Come (Atlantic). It was recorded in May and released in November of 1959, and it's a matter of when in our life we caught up with it. For some of us, that's when we first felt liberated by ...

Roberto Miranda has appeared on almost one-hundred albums but has been lightly recorded as a leader, and inexplicably struggled to generate interest among labels. Dark Tree Records has released some great Horace Tapscott performances from the '70s and '80s. The label resurrected a Miranda-led session on Live at the Bing Theater; Los Angeles, 1985. Recorded at ...

Musician Zvonimir Tot: Zvonimir Tot (z-VON-e-mere TOTE) is a jny: Chicago-based jazz guitarist, composer and arranger with a style deeply rooted in the jazz tradition but flavored by his European origin. Tot has performed in the United States, Belgium, Croatia, Germany, Hungary, Macedonia, Mexico, the Netherlands, Portugal, Romania, Serbia, South Africa, and Spain. He has performed ...

Pete Coco: Lined With A Groove 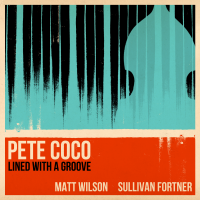 Bassist Pete Coco tips his hat to his fellow four-stringers with his debut recording, Lined With A Groove, in a piano-trio setting, with New Orleans-bred Sullivan Fortner on the eighty-eights, and Matt Wilson sitting in on drums. The setlist is drawn from the compositions of fellow bass men Charlie Haden, Ron Carter, Paul Chambers, Ray Brown, ...