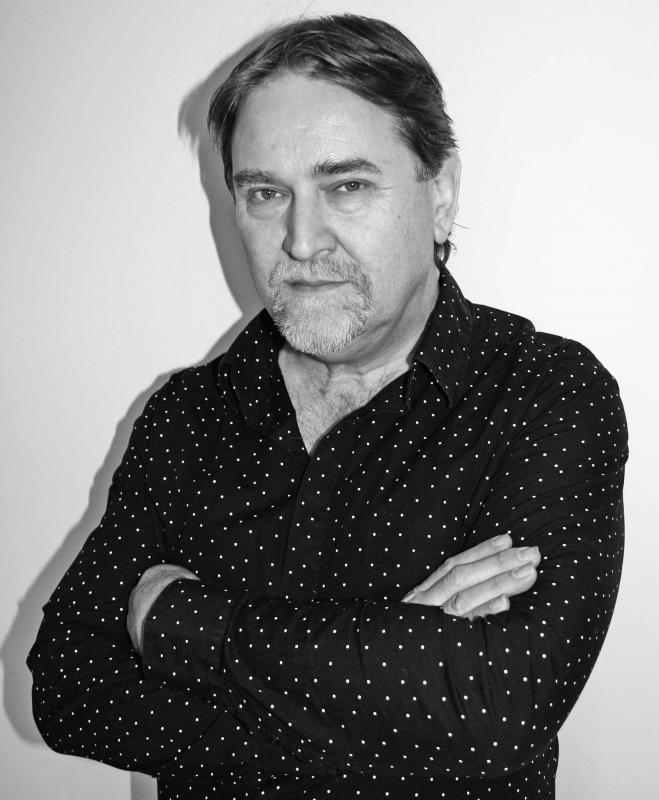 Tim's first encounter with a piano was at the age of eight, in a dentist's waiting room. After classical piano lessons he taught himself jazz and blues from the age of 14, after seeing Thelonious Monk on TV.

Since forming the long-lived modern jazz quartet Spirit Level in Bristol in 1979, he has performed his compositions at jazz clubs and festivals in almost every European country. Tim expanded Spirit Level to a nine-piece in 1999, renaming it Great Spirit and recording a first CD with an all-star lineup that included Denys Baptiste, Gilad Atzmon, Dick Pearce, Roger Beaujolais and Tony Kofi. The nine-piece toured the UK several times, featuring some of Britain's top jazz musicians such Peter King, Ed Jones, Jason Yarde, Sebastian Rochford and many others. Their latest CD, Epistrophy, has received rave reviews.

Tim has released over a dozen albums under his own name, featuring line-ups from duo to nine-piece, including two with Austrian saxophonist Sigi Finke and three trio albums including his most recent CD, Shapeshifting (33Jazz, 2010). Two of his trio CDs are listed in the Japanese publication, The 100 Best Piano Trio Records of All Time.

He also enjoys playing blues and has toured and recorded with many well-known blues artists, including the award-winning Otis Grand, Dana Gillespie and Earl Green, and US guitarists Joe Louis Walker and Larry Gamer.

Apart from his playing activities, Tim is one of Britain's best-known jazz educators, a jazz examiner and contributor to the ABRSM jazz piano syllabus, and the author of four acclaimed tutors including Improvising Blues Piano (1997) and Exploring Jazz Piano (2005), published by Schott Music (with CDs). The latter won the prestigious MIA award for "Best Pop Publication" in 2006. Tim currently teaches jazz piano at Morley and Goldsmiths Colleges and The City Lit in London.

I knew I wanted to be a musician when...
I first sat at a grand piano, aged eight.

Your sound and approach to music:
As a self-taught jazz player, I draw on a variety of approaches, rather than following methods taught in the conservatoire. Groove is an important aspect of most of what I do. A strong blues influence often permeates my work—The Rough Guide to Jazz described my style as "Luminously funky... Iaced with the blues..."

Your teaching approach:
I well remember how it feels to be completely in the dark when trying to learn jazz —when I became interested as a teenager there were very few books available, and it wasn't possible to study jazz at college. I get a lot of satisfaction from helping people who may be in the same position as I was back then.

Concerning jazz improvisation, my philosophy is that there is no right or wrong way to do it. I always stress that any tune or chord sequence lends itself to a variety of approaches, and try to suggest some of these to my students.

I now have four tuition books on the market, published by Schott Music. For the beginning improviser I usually recommend Improvising Blues Piano as a good starting point, since the blues only uses three chords and a simple 12-bar sequence, and there is less theory and harmony to take onboard. Many of the basic concepts of jazz can be introduced in the context of playing blues —eg: walking bass lines, swing eighth notes, use of modes, rootless voicings, horizontal and vertical improvisation, etc.

The two books that follow, Exploring Jazz Piano, Vols 1 and 2, are a systematic and graded method, organized following harmonic principles. It is my opinion that most jazz books start with material that is too complex, often ignoring basic building blocks such as major and minor triads. Vol 1 spends a considerable amount of time with triads before moving on to seventh and ninth chords. The second volume extends the approach to cover more complex harmony such as sus4 and #11 chords, quartal, rootless and two-handed voicings, altered and diminished chord and scales, polychords, etc.

My most recent book Exploring Latin Piano is a collaboration with pianist Johnny Crawford. In this book, the emphasis is less on harmony, more on rhythm with some quite challenging co-ordination issues between the hands. We aimed to cover not just Salsa and Bossa Nova, but many other lesser known styles from countries such as Columbia, Venezuela, Uruguay, Argentina and Spain, including Tango and Flamenco.

Your dream band:
I am lucky to have already formed my dream band, the nine-piece Great Spirit, composed of all my favorite British jazz musicians, all bandleaders in their own right. This in itself was often problematic, as everyone was always busy, just organizing a rehearsal was usually a nightmare, and everyone wanted long solos in every tune! Nevertheless we managed to tour the UK several times between 1999 and 2006, played some great gig and festivals, and recorded two highly acclaimed CDs on the 33 Records label.

Road story: Your best or worst experience:
I knew the writing was on the wall for Great Spirit when we broke down in our tour bus 40 miles outside Aberdeen in the North of Scotland, on our way to our last gig in Edinburgh in November 2006. After several hours of stressful waiting, the rescue truck eventually showed up, but it wasn't big enough for all nine people plus all our equipment (which included vibes, keyboards, double bass, drum kit, amps, etc).

Another long wait, and eventually somebody from a local garage took us to Edinburgh, where we just made it in time to play our gig, but were left without transport and no hotel, since the plan had been to drive home afterwards.

Having previously called the hire company, they sent another bus and driver up from London (300 miles away) to take us home, but he didn't arrive until about 2 am, some three hours after the end of our gig. Meanwhile we were forced to pack up our gear on the pavement outside the club and wait for him!

All the stress accompanying this scenario made me realize just how easily things can go pear-shaped. Touring is great when things go according to plan and you're working with the right bunch of people, but there have got to be easier ways of doing it than taking a nine-piece band on the road!

Favorite venue:
I've played many amazing venues, but in London my favorite is the Pizza Express Jazz Club in Dean Street, Soho. It has a nice grand piano and holds only 100 people, making it intimate enough to connect strongly with the audience.

Your favorite recording in your discography and why?
I have a soft spot for the two Great Spirit CDs, recorded with my nine-piece band, with whom I was touring at the time, and featuring the cream of London's jazz musicians. The 2005 Epistrophy CD ,in particular, received some great reviews.

Otherwise my favorite CD is of course the most recent one —Shapeshifting, recorded in 2010 with my trio.

What do you think is the most important thing you are contributing musically?
I think one needs to have a certain amount of modesty when assessing one's position in the grand scheme of things! It's very gratifying when people enjoy one's music, but I expect that my tuition books will be read long after people have stopped listening to my CDs!

How would you describe the state of jazz today?
Still evolving and fragmenting.

What are some of the essential requirements to keep jazz alive and growing?
Develop a younger audience. Reverse the trend for marginalization perpetuated by the media. Get it back on TV and mainstream radio.

What is in the near future?
I'm currently writing a lot of piano music and am becoming very interested in the possibilities offered by multiple pianos. The first step may well be a collection of duets for four hands on one piano.

I was also recently commissioned to write a piece for pianist Kate Ryder, featuring her collection of vintage toy pianos and a looper pedal. The resulting sound of the toy pianos layered on top of one another has an almost gamelan-like quality. It was first performed on May 21, 2011 at the Royal Festival Hall in London.

I'm now beginning to plan ahead for my 60th birthday gig at London's Kings Place in October 2012, of which more anon...

If I weren't a jazz musician, I would be a:
Perhaps a painter, photographer or film maker.