Merging the electric, urban sounds of West Coast and Chicago blues with the down-home acoustic traditions of the Delta, guitarist Joe Louis Walker never strayed far from what he calls "the real blues." In a career that spans more than 35 years, he’s balanced tradition with innovation and made a significant mark on the evolution of the genre.

Born on Christmas Day in 1949 to parents whose migrant work took them from Arkansas to San Francisco, Walker first discovered the blues via their collection of 78 recordings"a treasure trove of artists like Amos Milburn, B.B. King and Howlin’ Wolf. He picked up the guitar at age 14, and left home two years later to pursue his creative muse in San Francisco’s fabled Haight-Ashbury district. Sharing a room with guitarist Mike Bloomfield, Walker worked his way into the Bay Area blues scene. Among the more prominent spots on his beat was the Matrix Club, where he met and played with the likes of Freddy King, John Lee Hooker, Muddy Waters, Lightnin’ Hopkins, Magic Sam and other legends whose tours made stops in San Francisco.

"A lot of people think I started playing the blues in the mid ‘80s, but I was gigging in the ‘60s," Walker explains. But in 1975, weary of the lifestyle he had created, Walker took the high road and joined a gospel quartet called The Spiritual Corinthians. "I was living the blues lifestyle during a time when everything was excessive," he says. "I had to find another way to live. That’s when I immersed myself in gospel music." The Spiritual Corinthians’ ten- year trajectory included a 1980 album called “God Will Provide,” and has left an indelible imprint on Walker’s approach to songwriting and singing to this day. "I like to keep my feet in gospel," he says, "because it’s pure."

Walker’s interest in the blues reignited during a Corinthians performance at the 1985 New Orleans Jazz and Heritage Festival. He grabbed a subsequent opportunity to tour Europe with the Mississippi Delta Blues Band, then returned to San Francisco and formed The Bosstalkers. Backed by The Bosstalkers, he released “Cold Is the Night” in 1986, which marked the beginning of an ambitious touring and recording schedule that earned Walker three successive W.C. Handy Awards for Contemporary Artist of the Year in 1988, 1989 and 1990.

In 1992, Walker signed with Verve, where he released “Blues Survivor,” “Great Guitars,” “Preacher and the President,” “Silvertone Blues,” and others"all of which mixed original material with R&B standards, and showcased his lean guitar style and emotionally charged vocals. “Blues of the Month Club,” his 1995 Verve release co-produced by Steve Cropper, included appearances by The Spiritual Corinthians and the Memphis Horns. In response to the album, Down Beat critic Michael Point wrote: "Walker, equally adept in either the acoustic or electric context, is arguably the most complete bluesman on the current scene."

In addition to his own recordings and performances, Walker has been involved in numerous side projects over the years. In 1989, he took part in the Celebration for Young America, an all-star blues tribute presented by the White House that featured Stevie Ray Vaughan, Albert Collins, Percy Sledge and several others. In 1991, he joined the Willie Dixon Dream Band for several memorable shows. His friendship with B.B. King led to his appearance on King’s 1993 Grammy-winning “Blues Summit” recording. In addition, Walker led the tribute to B.B. at the Kennedy Center in 1995. That same year, Walker and his Bosstalkers scored the Handy Award for Blues Band of the Year, and he won the 1995 Bammy (Bay Area Music Award) for Blues Musician of the Year.

Walker joined the Telarc label in the summer of 2002 with the release of “In the Morning,” a fiery mix of blues, R&B, soul and gospel that encompasses every aspect of the rich and diverse spectrum of his musical career.

New Direction" was released in 2004 on the Provogue label and Joe Louis Walker continued his musical journey.

Joe Louis Walker's latest CD "Playin' Dirty" (2006) was released by JSP Records. This time Joe Louis recorded the album with only two other musicians in a studio in Paris (a few overdubs added later). The music was recorded in an old fashioned way and most important for JLW were the generated groove and feeling ... and you can be sure JLW knows his blues. Show less

Joe Louis Walker's Incendiary Between a Rock and the Blues 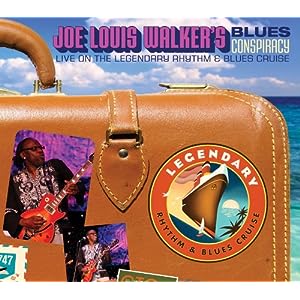 All About Jazz musician pages are maintained by musicians, publicists and trusted members like you. Interested? Tell us why you would like to improve the Ronnie Earl musician page.