Ex-Nighthawks guitarist Jimmy Thackery has been playing his own brand of blues-tinged rock as a solo artist for some twenty years now (he left the Nighthawks in 1987) and there's no denying that he's a first-class guitarist with a sharp ear for tone and a knack for perfectly placed fills and evocative leads. His quavering, shaky voice is a problem, though, and while he conjures up the feel of an old veteran country singer on some of his slower numbers, his singing often lacks the punch, power and sass of his guitar playing on the more upbeat material.

You don't buy a Jimmy Thackery album for the vocals, though, and fans of his crisp guitar work won't be disappointed at all with Solid Ice, which comes packed with wonderful riffs and multi-tracked leads. Thackery took half a year off from the road to write the songs for this project, so it's a bit ironic that the best five tracks (roughly half the album) are instrumentals. The vocal cuts are certainly passable, with "How Long," which uses Thackery's hesitant country twang to good advantage, and the powerful "Fifteen Minutes," a treatise on the hollowness of fame that rides over an archetypal chord progression that sounds like a slowed-down version of the riff to AC/DC's "Problem Child," being the most singular.

It's the instrumentals, though, that really shine here, beginning with the no-frills simplicity of "Hobart's Blues" and the fluid, gliding prettiness of "Daze in May." The album ends with a sort of instrumental suite, including the title track, "Solid Ice," the country-tinged "Blue Tears Reprise" (which revisits a vocal track, "Blue Tears," from earlier in the album sequence) and a solid cover of Jimi Hendrix's funky "Who Knows," which brings everything to a close on a fiery up note. The end result of all this is a solid outing, but it feels a bit like Thackery is in a holding pattern. His singing isn't likely to change, so unless he decides to go completely country and turns that voice from a shaky point into an effective character study, he might give a thought to an album of instrumentals because his guitar sure can talk that talk and he has already proven that he can play anything from surf to jazz 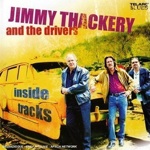 All About Jazz musician pages are maintained by musicians, publicists and trusted members like you. Interested? Tell us why you would like to improve the Jimmy Thackery musician page.