Tommy Castro has been quietly earning his reputation as a blazing contemporary blues guitarist for some time now, and is finally coming into his own. He has been recognized for several years now by the Blues Music Awards, and his Alligator Records release “Hard Believer,” has been received with much approval.

Joining Alligator Records is a new high point in Castro’s career. “I feel that in signing with Alligator I’m making a major step forward. I’m excited about the new release and grateful for the opportunity to record for a label with such a rich history in blues and American roots music.

Born in San Jose, California in 1955, Castro first picked up a guitar at age 10. He came under the spell of Eric Clapton, Elvin Bishop, Mike Bloomfield and other blues rock players early on. As he got older, Castro moved forward by investigating the past, falling in love with the blues guitar work of Muddy Waters, B.B. King, Freddie King, Buddy Guy, Elmore James and singers like Ray Charles, Wilson Pickett and James Brown. By his late 20s he was playing in a variety of San Francisco-area blues and soul bands.

Castro joined Warner Brothers artists The Dynatones in the late 1980s. The much-loved rocking soul band had a huge fan base and toured the U.S. constantly. He honed his chops with the band on the road for two years, performing live all across the country and backing major artists like Carla Thomas and Albert King. He formed The Tommy Castro Band in 1991 and won the Bay Area Music Award for Best Club Band in both 1993 and 1994. With his local fan base quickly expanding, he released his debut album, “Exception To The Rule,” in 1996 on Blind Pig. He began touring nationally with his band, picking up new fans everywhere he went. The album won the 1997 Bay Area Music Award for Outstanding Blues Album, and Castro also took the award for Outstanding Blues Musician that same year.

In the mid-1990s The Tommy Castro Band served as the house band for three seasons on NBC Television’s Comedy Showcase (airing right after Saturday Night Live), bringing him in front of millions of viewers every week. During the 1990s and into the 2000s, Castro released a series of critically acclaimed CDs for Blind Pig, Telarc and 33rd Street Records as well as one on his own Heart And Soul label. In 2001 and 2002 the legendary B.B. King asked Castro to open his summer concert tours. Castro received an open invitation to join the King Of The Blues on stage for the nightly finale.

Publications across the country, from The Washington Post to The San Francisco Examiner, have sung his praises. Guitar Player called Castro “the hardest working bluesman on the scene today.” The Philadelphia Inquirer declared, “Castro plays infectious, roaring roadhouse romps with incendiary licks and a touch of New Orleans soul.” Carlos Santana, with whom Castro has performed, said, “Tommy Castro has the voice and the sound to touch everybody’s heart.” With "Hard Believer" and plenty of high-profile tour dates to follow, believing in the prodigious talent and unbridled energy of Tommy Castro is anything but hard. Show less 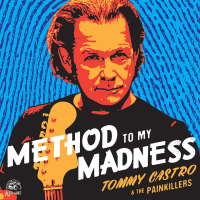 Method to My Madness

Live at the Fillmore

All About Jazz musician pages are maintained by musicians, publicists and trusted members like you. Interested? Tell us why you would like to improve the Janiva Magness musician page.