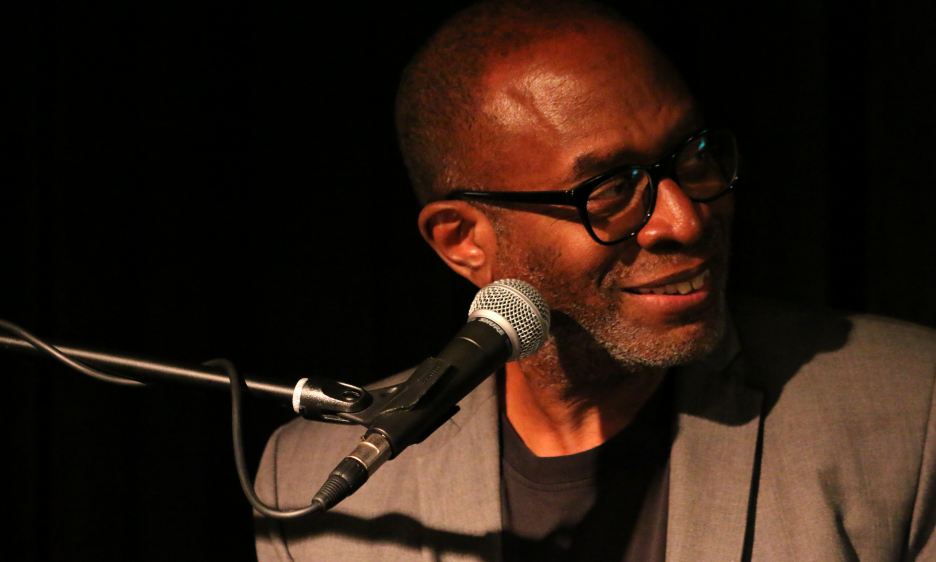 Mostly, the US bluesman Joe Louis Walker can be heard playing incendiary electric guitar licks, but this UK mini-tour offered the rare opportunity to catch him in acoustic mode, even if this dude's definition of 'acoustic' is much meatier than most. He might have been physically playing a hollow bodied instrument, but with the aid of pedals and amplification, we certainly weren't talking Charley Patton.

Sunnyland Slim's "It's You, Baby" was delivered with raw and deep vocals, but with perfectly formed yowls, all three players getting to solo. It soon became clear that Walker was going to concentrate on a dense, strumming approach, rather than the elaborate picking he'd do on an electric axe. When he did solo, it was in quite a jazzy style, with a lowdown capo. He bent the strings vigorously when making single line forays. Even in this trio setting, there were several duo permutations, to vary the delivery. Katz played a completely solo "Chicago Breakdown" (Big Maceo Merriweather), making many personal diversions into elaborate decoration, and then a slidin' Elmore James selection ended the first set, with "Dust My Broom" pushing Walker's vocals to the very edge of howlin' expression. The second set invited a more rocking motion to increase, even with this acoustic instrumentation. The audience was adequate, but for a Saturday night session, Walker deserved much more of a bulging, capacity crowd.

The Scottish troubadour Alasdair Roberts added to this venue's sterling run of intimate solo shows, drawing his audience close for alternative yarn-spinning, often not so cheerful, but certainly warming the melancholic glow that surrounds his frequently grim tales. Roberts has a heartily percussive attack on his guitar strings, his voice heavy with dialect phrasing, hovering morosely. His picked phrases have a marked clarity, notes held long and lingering high, both via voice and guitar. Roberts sang "False Wish," which he'd just recorded up in Glasgow: 'fall away false flesh, fall away-o!.' This was followed by "Shifty Old God" and "Apprentice Boy," this last being an a capella reading of an old Irish song, savouring the words like swirled wine. Another pair of new songs impressed, with "Comments" and "Actors" being followed by "Waxwing," then the night concluding with "The Stranger With The Scythe," Roberts emitting a tight humming that was bordering on yodelling.

We perhaps didn't realise this, but technically, Roberts was born in Germany, although he grew up in Scotland and has remained up north since that time. Perhaps this is why he devotes himself to this wondrous hyper-Scotch expression, which is like an ultimate distillation of the indigenous folk tradition, even if warped (or should we say evolved) into a modernised incarnation. He stews the ingrained ingredients, whilst continuing to respect their individual flavours.

The Brooklyn singer, flautist and keyboardist Brian Jackson can't escape his crucial connection to Chicagoan poet-singer-keyboardist Gil Scott-Heron, as the pair collaborated on a run of classic albums during the 1970s. The notable standouts were some of the releases that gave Jackson a co-credit: Winter In America, Bridges, Secrets and 1980, the latter being the year that the duo sundered their artistic relationship.

The Jam House ended up fairly crowded for this Tuesday night gig, with Jackson unavoidably emphasising the Scott-Heron years, and leafing through that astounding songbook. He concentrated on Fender Rhodes electric, but also shared time with the acoustic piano, soloing very fluently, with light trills graduating to emphatic hammering. His vocal control was strong, in the Scott-Heron role, with its impressive phrasing, sustain and enunciation. Jackson says that matters haven't improved much since the 1970s, and that these songs retain their potency, and their topicality. They were, in their own time, both prophetic and destined for immunity to time-dating.

There were some lesser-known songs to begin, the first big hitter arriving with "Lady Day And John Coltrane," which was apparently one of those early tunes that Jackson didn't co-write. Here, it was given a tougher, faster touch, involving a mid-song switch from electric to acoustic piano for its solo. Backed by just bass (Yolanda Charles) and drums (Chris Morris), the latter often too intrusively rocky, where much of the repertoire required some sensitivity. "Winter In America" was outstanding, but "Guerilla" ended up being tiresome, and overly long, with too much crowd-prodding. Of course, a full climax was attained during "The Bottle," where Jackson stood up to deliver that famed flute solo, vocalising into his instrument. Just when we might have been thinking that several essential songs had been missing, the encore provided us with the downbeat "Home Is Where The Hatred Is," one of the pair's finest numbers.