Home » Jazz Articles » Kihong Jang: They Brought A New Kind of Music To Me

Kihong Jang: They Brought A New Kind of Music To Me 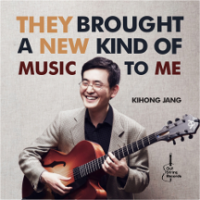 Kihong Jang's debut record as a leader is the antithesis of the hectic, anxious character of many contemporary jazz releases. The guitarist's unassuming approach contains an impressive degree of depth and certainty for a young musician. The disc's six tracks offer affably swinging sounds that aren't particularly knotty, convoluted or strained. Original compositions, choice of tempos and solo statements evince the virtues of temperance and economy. Jang and pianist Jinjoo Yoo (both presently based in the New York City area), have sanded off some of the edges of bebop without devitalizing its essence. In league with a couple of veterans, bassist Neal Miner and drummer Jimmy Wormworth, they don't come off as devotees of bop as much as utilizing it as a point of departure in forging their own identities.

Jang's relaxed improvisations unfold easily without fuss or pretense. Lagging a touch behind the beat, his single note lines never hesitate, or pause to regroup and reach for more ideas. The upshot, particularly on the title track, as well as Yoo's compositions "Genealogy" and "Goldfish, Goldfish!," is a quiet, subtly soulful authority. A fair amount of heat from Yoo and Miner moves in Jang's direction. During Jang's tune "Leslie," Yoo's comping maneuvers politely but firmly around the guitarist, applying a modicum of pressure without crowding him. While Miner consistently walks with just the right degree of weight and emphasis throughout the record (he distinguishes himself as a soloist as well), there's something special about the genial momentum generated by him and Jang.

The sense of continuity that is integral to Jang's playing is also at the forefront of Yoo's efforts. And not unlike the guitarist, her lines are trim and deceptively persistent. In the title track she generates interest by stressing select notes, making them sparkle and shine a little more than the others. She engenders a kind of courtly, swinging movement on Jang's "Flamingo." Yoo's clarity of expression during "Genealogy" is seasoned by slightly edgy changes in emphasis.

Miner's and Wormworth's pilotage of the pace of each track is truly a stroke of good fortune for Jang and Yoo. They are the ideal bass and drums team for straightforward jazz that amiably simmers instead of carrying-on to make a point. Equally adept at brushes and sticks, Wormworth doesn't command much space, yet he's always present in a supportive role. The conventional ride cymbal rhythms during Jang's "Goldfish, Goldfish!" solo, small, barely audible, and in synch with Miner's walking line, make a genuine impression.

They Brought A New Kind Of Music To Me is a satisfying and consistently enjoyable recording. And it's not a stretch to anticipate Jang's growth and continued development (and Yoo's as well) in the future.