"I LOVE her playing and compositions!!! I hear Thelonious, Bud, John Lewis from her. Jinjoo does not show off. She tells a lot of big story with fewer notes, than most young artists of her age!" -Jimmy Wormworth

"A truly wonderful pianist. Jinjoo brings a uniquely fresh, honest and personal approach to both her playing and her compositions. She really swings and tells a story!" -Neal Miner

Jazz Pianist/Composer/Arranger Jinjoo Yoo is a charismatic performer with a unique voice. Hailing from Seoul, South Korea, Jinjoo currently resides in New York and collaborates with different projects and leads her own group as well. As a leader and a solo performer, she has toured internationally, including performances in the United States, Italy, Greece, Azerbaijan, and South Korea. In 2017, she was selected as one of the finalists for the Baku Jazz Competition.

Enjoying singing and playing instruments from her youth, Jazz captured her attention soon after starting University in South Korea. It didn't take long for her to fall in love with Mary Lou Williams, Wynton Kelly, Teddy Wilson, Bud Powell, Sonny Clark, Art Tatum, Jimmy Rowles, Billie Holiday, Carmen McRae, and so on. Since then, she has immersed herself in the music by listening to jazz legends' albums, studying music harmony and theory by herself. Although she was studying Sociology and Economics in her undergraduate years, she found herself more interested in Jazz rather than her major. After her graduation, she decided to focus on jazz more deeply in New York. In 2015, Jinjoo was accepted at the Aaron Copland School of Music at Queens College and earned Master's degree in Jazz Performance from Queens College in 2017.

Jinjoo thinks that her music should be able to describe this world, either beautiful or ugly, and the way she feels while observing it. Her original tunes bring stories and emotions of curiosity, joyfulness, tragedy, gratitude, melancholy, and pain. Jinjoo recently released her Debut Album

"...She can be tender, ruminative, but she can also create vivid joyous dances: songs that call out for lyrics. Her playing is spare but I never felt it to be sparse, the sonic equivalent of a large room with one canvas chair against the wall. No, her single notes seem just right - percussive commentary when needed, lyrical otherwise, and her harmonies are lovely, neither formulaic nor jarring...."

Jinjoo stylistically encompasses the range from Jazz Classic and the American songbook to original compositions that are played with swinging intuition. In New York, Jinjoo has performed at venues such as National Sawdust, Rockwood Music Hall, Shapeshifter Lab, LeFrak Concert Hall, Swing 46, Nublu, Russian Samovar, Caffe Vivaldi, Club Bonafide, Tomi Jazz, Italytime, Shrine, and Silvana to name a few. Jinjoo can be often seen performing as a leader or sideman around the New York City. Her group regularly performs with various settings including Duo, Trio, Quartet, and Quintet.

Finalist of the Baku Jazz Competition

“…It’s clear that she has steeped herself in the jazz tradition — reaching far and wide to include bebop, Jimmy Rowles, Ellington, Monk, and American popular song at its best — but she is herself. …..”

“…Her music is unhackneyed, melodic, welcoming. She spins out long graceful lines that aren’t four-bar modules copied from other pianists. She has her own voice, or I should say, “voices.” The performances often begin with a simple melodic motif set over a clear, swinging rhythmic foundation . . . and they transparently show off her curiosity. …”

“…It’s clear that she has steeped herself in the jazz tradition — reaching far and wide to include bebop, Jimmy Rowles, Ellington, Monk, and American popular song at its best — but she is herself. …..”

“……One of the most listenable albums I’ve heard in many a turntable revolution! Although very bop-influenced in her solos, Jinjoo is able to spread her fingers across many genres, Bud Powell or Mel Powell, she takes them all in her stride…..” 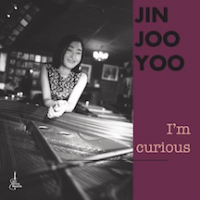 From: I'm Curious
By Jinjoo Yoo 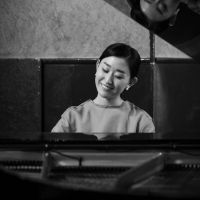 All About Jazz musician pages are maintained by musicians, publicists and trusted members like you. Interested? Tell us why you would like to improve the Jinjoo Yoo musician page.