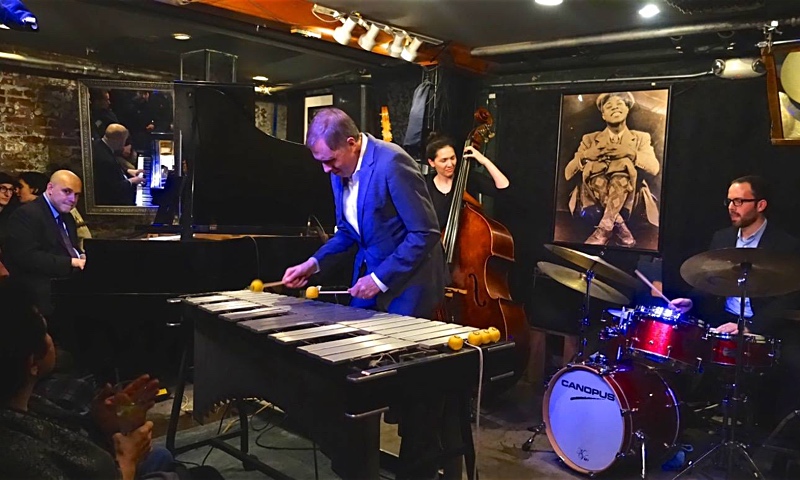 BY CHUCK REDD
May 8, 2016
Sign in to view read count
About Chuck Redd
Chuck Redd is an internationally well-known performer on both drums and vibraphone. He began his career when he joined the Charlie Byrd Trio at the age of 21. He also became a member of the Great Guitars (Barney Kessel, Byrd, and Herb Ellis.) To his credit are 25 European tours and six tours of Japan, with the Barney Kessel Trio, Ken Peplowski and the Benny Goodman Tribute Orchestra, Terry Gibbs and Conte Candoli.

Redd is featured on over 80 recordings. Releases include his Arbors CD, All This and Heaven Too, featuring Gene Bertoncini and George Mraz; Chopin Jazz with Rossano Sportiello; You're My Everything with Dick Hyman and Jay Leonhart; and Nice N' Easy with Houston Person. He can also be heard on the soundtrack to the popular television series, The Great Chefs, and the NPR broadcast Jazz Smithsonian.

What instruments do you play?
Vibes and drums. I play Yamaha Vibes and I prefer their three octave instruments. I feel that Yamaha has captured a classic vibraphone sound. I'm currently playing Pearl drums when I'm at home but I travel a lot, so I end up playing drums that are provided for me. I really enjoy the drums at most of the NYC clubs, especially the Canopus drums at Smalls, the drums at Kitano's and Dizzy's.

When did you know you wanted to be a musician?
I've always known.

How would you describe your sound and approach to music?
I try to share my love of playing and my desire to learn. I attempt to teach some of the life changing lessons that I learned from some of the master musicians that I've been lucky enough to play with.

Who would be in your 'dream band' and why?
Ray Brown, Monty Alexander, Milt Jackson—I'm on drums! Why? Just think how much fun that would be!! Or...Ray, Monty, Mickey Roker or Roy Haynes, and I'm on vibes.

Tell us a road story.
In Namibia, Africa, Dizzy carried all of my drums to his room because he thought they wouldn't be safe in the lobby where I had left them. Not knowing he'd done this, I woke up the next morning to the sound of a Cuban rhythm being tapped out on my door—Dizzy. He had brought my drum set from his room two floors up all the way down the hall to my room and said, "They don't have drums like yours here, so I thought I should take care of them for you."

What was the first jazz record that you bought?
I think it was a Miles Prestige compilation with Kenny Clarke, Monk, Bags, etc.

How would you describe the state of jazz today?
It's always going to be fine. I try not to think the "scene" or the "state." As long as I'm part of it and I stay positive, then I'm contributing to jazz to some extent. The music is the reward and musicians will always help each other get along. Things will always change. If I don't hear music being played a certain way that I like, then I try to do it myself!

What do you think are some of the essential elements to keeping jazz alive and growing?
There needs to be a SWINGING feeling if it's jazz. When it's happening, it communicates with people on a visceral level. I think many people who group with hip hop or funk or R&B or whatever can feel this swing groove when it's happening. You can swing any kind of harmony or melody, even something really out! But remember, "It Don't Mean A Thing..."

What in the near future for you?
I'll be fronting an all-star L.A. Big Band for the L.A. Jazz Institute on May 18, playing the Terry Gibbs Dream Band charts—Terry will be there and I think we're going to play a duet!!

What's your greatest fear when you perform?
The beautiful thing is that when you're really playing, there is no fear!

What song would you want to have played at your funeral?
"Time Remembered" by Bill Evans, or "Renewal" by Monty Alexander.

What's your favorite song to either sing or whistle in the shower:
"Body and Soap"

If you have a "day job," what is it?
When I'm not touring, I teach jazz percussion at the University of Maryland School of Music.