Chuck Redd is an internationally well-known performer on both drums and vibraphone. He began his career when he joined the Charlie Byrd Trio at the age of 21. He also became a member of the Great Guitars (Barney Kessel, Byrd, and Herb Ellis.) To his credit are 25 European tours and six tours of Japan, with the Barney Kessel Trio, Ken Peplowski and the Benny Goodman Tribute Orchestra, Terry Gibbs and Conte Candoli.

Redd was featured vibraphonist with the Mel Torme All-Star Jazz Quintet from 1991 until 1996. While appearing in New York with Torme, Ira Gitler of Jazz Times said: “Redd's vibes were equally notable for vigor and melodiousness.”

He served as Artist-In-Residence at The Smithsonian Jazz Café in Washington, DC from 2004-2008. Redd frequently appears leading groups at The Oregon Coast Jazz Party and has been a featured musician at The Oregon Festival Of American Music every year since 2007. In 2007, Redd was featured with the prestigious “Milt Jackson Tribute Band.” Other engagements have included jazz cruises, stints with Bucky Pizzarelli and Ken Peplowski at Jazz at Lincoln Center, headlining at Smalls and at The Kitano in New York City and at jazz festivals around the US. He has toured and performed with Dizzy Gillespie, Mel Torme, Tommy Flanagan, Bill Mays, Ray Brown, Monty Alexander, Laurindo Almeida, Tal Farlow, Rebecca Kilgore, Scott Hamilton, Mickey Roker and Houston Person. Jazz Times has praised Redd's playing, describing his vibes work as, “Exquisite! “ The Washington Post admired his “melodic sparkle.” He was awarded “Best Vibist” in New York’s Hot House Jazz Magazine 2015 Fans Decision award.

Redd is featured on over 80 recordings. Releases include his Arbors CD, All This and Heaven Too, featuring Gene Bertoncini and George Mraz; Chopin Jazz with Rossano Sportiello; You’re My Everything with Dick Hyman and Jay Leonhart; and Nice N’ Easy with Houston Person. He can also be heard on the soundtrack to the popular television series, The Great Chefs, and the NPR broadcast Jazz Smithsonian.

Redd's career highlights include a concert with the Dizzy Gillespie Quintet in Africa for the Namibian Independence Celebration, a recital at the White House with the Barney Kessel Trio, two concerts at Carnegie Hall with the Mel Torme Quintet, and The Tonight Show. In 2008, he was a featured soloist in the finale concert at The Lionel Hampton International Jazz festival with The Lionel Hampton Big Band and the Clayton/Hamilton Jazz Orchestra. In February 2013, Chuck performed with the Dream Band co-leading with drummer Jeff Hamilton in a salute to vibes legend Terry Gibbs. Most recently, he was the 2014 honoree at The Roswell Jazz Festival. In addition to leading his own groups, Redd was a member of the Smithsonian Jazz Masterworks Orchestra for 15 years. He frequently performs in New York City and continues to tour nationally, performing at festivals and clubs. He is on the faculty at The University of Maryland School of Music and presents master classes, workshops and lectures around the country.

His Arbors CD, Happy All The Time, is a critically acclaimed tribute to his mentor, Barney Kessel, and features Monty Alexander and Jeff Hamilton, and his Noteworthy CD, When Redd is Blue, is a collaboration with his brother, pianist Robert Redd, and features saxophonist Harry Allen. Another Arbors release, The Common Thread, features Mickey Roker, Bob Cranshaw,Houston Person and Rossano Sportiello. Redd produced and is featured on For George, Cole and Duke, lead by Harry Allen for Blue Heron Records. Show less

Vibraphonist Chuck Redd to appear with the Nate Najar Trio

“The Common Thread is expert mainstream jazz designed to give pleasure rather than provoke—an album to visit again and again, discovering more wit and depth each time.” Jazz Times

“The music...is relaxed and swinging, reminiscent of the George Shearing Quintet of the 1950's.” Jazzreview.com

“Chuck Redd and friends...accomplish much more than a rehashing of yesteryear on All This and Heaven Too. While fans of older jazz styles will enjoy the album, anyone interested in superbly executed music should give it a listen.” Allmusic.com 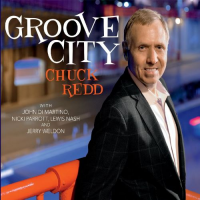 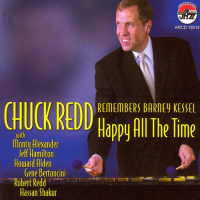 Happy All the Time 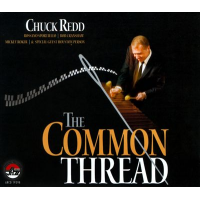 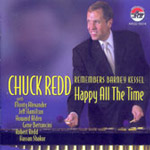 All About Jazz musician pages are maintained by musicians, publicists and trusted members like you. Interested? Tell us why you would like to improve the Chuck Redd musician page.