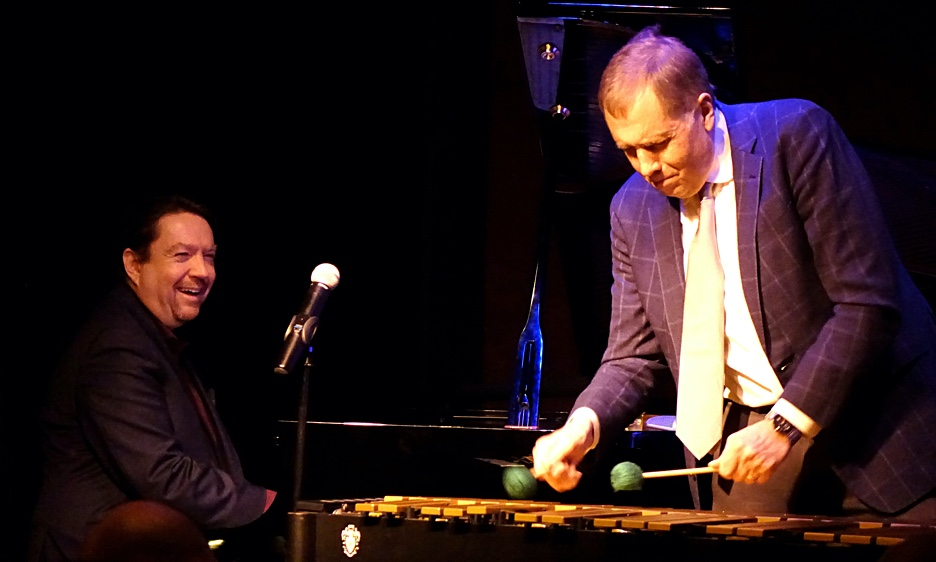 Masterful musicians make excellence look easy. It's not always immediately obvious, the quality becomes evident through its sustained presence, like a spreading smile.

The band opened with "Tricotism" written by early bebop bassist Oscar Pettiford and first played by his Modern Quintet in 1954. Kevin Bales led them off with a quiet piano introduction picked up by irrepressible bearded Billy Thornton on bass and Robert Boone currently drummer for the Count Basie Orchestra. Thornton bowed an exceptional solo section. The depths of sound vibrating from the double bass were a profound pleasure to hear, and far more demanding for the musician than walking a pizzicato bass line. Chuck Redd joined them on the house Musser vibraphone playing with fast attack and hardly any reverb. They moved on to a song which was a hit for Frank Sinatra with the Harry James Orchestra, "All or Nothing at All." Written by Arthur Altman in 1939, it became a big hit three years later, when Columbia released it during a long musician's strike.

Redd's green mallets led them into Antonio Carlos Jobim's "Triste" (Sad) which they played with relaxed precision. At times the mallets were at rest on the vibraphone bars where Redd, a tall man, leaned enough pressure to flex the shafts. Thornton delivered another section in arco with the bow sawing a vibrato ending, shadowed by Redd's beating mallets. The piano followed the relaxed mood until Bales broke out into a fast solo, building heavy chords into a samba rhythm accompanied by enthralled applause. Bales has to work hard at the keyboard, his hands are small so he throws tight shoulders into his work and his fingers fly. The music subsided back into soft sadness and a gentle fade which the vibraphone sustained to the finest point of detail. "Never Let me Go" was a Nat King Cole song from the 1956 crime movie The Scarlet Hour. Redd played a long solo introduction then Boone announced his arrival with a cymbal flush and brushed Thornton in to carefully place his bass notes. Bales joined with a trill high on the piano and laid out the melody which they played with a smooth, after midnight delivery.

Italo-American singer Roberta Setzu was born in Cagliari, Sardinia and now studies in Atlanta where Bales produced her first albumAs You Are yet to be released. The exceptional smoothness of the vibraphone would have been too much for her bright, almost brittle voice so Redd took a break and Bales accompanied her for Irving Berlin's "Cheek to Cheek" which she gave clearly in a charming Italian accent adding a long scat section.

Redd returned and played his "Blues in the Shedd" written about the John G. Shedd Institute for the Arts in Eugene, Oregon where he has been appointed Musical Director. The trio began loud, but Redd calmed them until the bass was picking the melody with hints of support from Bales' piano. Then Redd joined in and the vibraphone opened it out into an upbeat blues. In his solo Bales quieted the piano to form the base of a crescendo then launched in building upwards until both hands were playing the same notes an octave apart generating enormous power and sound. The vibraphone followed and got into a conversation in eights with drums. They all came together in a dramatic finish which took them to the break. The second set opened with "It's You I Like." It's easy to forget the composer Fred Rogers was an accomplished pianist when he was best known for his special empathy and understanding of children evident throughout his long career making children's television shows. This arrangement was made by Bales as part of a tribute performance he gave in 2019, featuring Chicago singer Keri Johnsrud who sang from the child's point of view with heartfelt innocence to wonderful effect. "Time after Time" was first recorded by Sarah Vaughan but it was written for Frank Sinatra to perform in the movie It happened in Brooklyn while Andre Previn played piano accompaniment offstage. Redd treated this well-loved nostalgic piece by leaving out phrases and notes in the sure knowledge that the audience knew what was missing. Understatement, hiatus and pauses invited involvement and left space for the bass while still swinging the tune along. "Renewal" was a Monty Alexander composition which had Thornton mouthing the notes while Redd moved to the drum kit for a virtuoso display of skill. They played out with a tune dedicated to Redd's wife, "A Groove for Gail" which appears on his CD Groove City (Dalphine,2019).