Angela on the Arts: Within

By TROY DOSTERT
January 7, 2020
Sign in to view read count 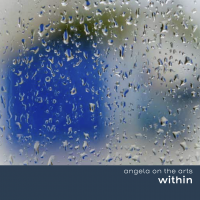 Aside from its somewhat unusual name, Angela on the Arts brings a well-grounded sensibility to its identity as a trio specializing in free improvisation. Espousing a patient, disciplined chamber aesthetic with an occasional hint of whimsy, its debut disc Within offers almost an hour's worth of intelligent, creative music spread over sixteen well-crafted vignettes.

The veteran of the trio is trumpeter John D'Earth, a musician with omnivorous tastes that range from mainstream jazz to pop, having played with everyone from Lionel Hampton to Pat Metheny to Dave Matthews. Although freely-improvised music represents the less-documented portion of his resume, he possesses a strong personality in this context, with a compelling jazz-inflected sound and the lively imagination needed to lend a unique feel to many of the cuts. Violist Bonnie Gordon and bass clarinetist Michelle Oliva provide plenty of rhythmic spark and lyrical vitality of their own, and their partnership with D'earth is remarkably sympathetic, as each of the three responds to the others' suggestions through finely-honed listening and attentive anticipation.

Much of the album offers a quiet poignancy, as on the elegiac "Absence," where despite beginning with a playful turn from D'earth on flute, the track eventually settles in to a mournful reflection that brings out a powerful convergence among all three players, with D'earth's plangent trumpet tracing delicate figures interwoven with the gentle musings of Gordon and Oliva. Other tracks possess a stronger momentum, such as the suitably-titled "Obstinato," where Oliva's repeated phrases create a march-like tempo to draw out the jauntier side of D'earth's and Gordon's playing, or "Black Coffee," in which D'earth's muted growls catalyze his partners' rhythmic proclivities in a fittingly bracing set of maneuvers.

The album also makes judicious use of guest musicians, giving the trio opportunities to move in other directions. The addition of bassist Kevin Eichenberger allows Gordon to showcase her pizzicato technique on "Subwoofer," while soprano saxophonist Jack Sheehan's spirited appearance on "Grounded" frees D'earth to take on the role of percussionist, as his various interjections add further texture to the music.

The one downside to having a large number of rather brief tracks (several come in at under two minutes in length) is that we rarely get to hear the trio stretch out to develop its ideas more fully. The album sometimes has the feel of a set of conversation-starters rather than a sustained dialogue. In this regard the longest piece, "Within," at over seven minutes' duration, offers a tantalizing glimpse at what these musicians can do with a longer timeframe, as the piece unfolds gradually, with possibilities that are exchanged and explored by all three players in a riveting display of empathetic freedom. It's perhaps the most fully-realized example of the trio's potential, although there are plenty of other moments on this disc that offer similar rewards for a listener's devoted attention.

About Angela on the Arts