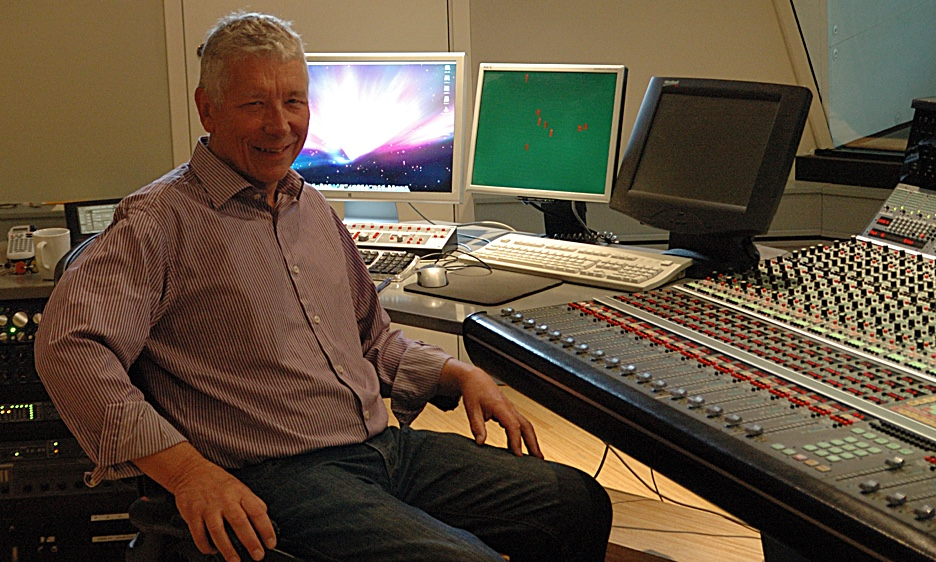 By JOHN KELMAN
November 6, 2019
Sign in to view read count
Author's Note: Jan Erik Kongshaug, owner and recording engineer at Rainbow Studios, Oslo, passed away on November 5, 2019. Beyond his best-known work on hundreds of recordings for the lauded ECM Records label in collaboration with label head/producer Manfred Eicher, Kongshaug's studio and engineering, mixing and mastering work has garnered significant international acclaim. Still, Rainbow continues to be the first choice for a great many other non-ECM recordings by Scandinavian artists including Jan Gunnar Hoff, Karin Krog, Lars Danielsson, and Mari Boine.

Kongshaug was born in Trondheim on July 4, 1944, the son of a guitarist. In addition to learning instruments including guitar and accordion, his burgeoning interest in the recording process led to his working at Oslo studios including Arne Bendiksen Studio (1967-1975) and Talent Studios (1974-1979), in addition to accepting work in New York City.

Early recordings made for ECM, upon opening Kongshaug's first Rainbow Studios in 1984, include Jan Garbarek's It's OK to Listen to the Gray Voice (1985), Gismonti's duo recording with Nana Vasconcelos, Duas Vozes (1985), Paul Bley's Fragments (1986) and First House's Eréndira (1985). His growing reputation also attracted other artists and labels from farther afield, such as the Yellowjackets' The Spin (MCA, 1989). Traveling to other studios abroad in addition to participating in documenting live recordings, Kongshaug engineered, mixed and/or mastered albums like Lyle Mays' solo debut, Lyle Mays (Geffen, 1986), David Torn's Cloud About Mercury (ECM, 1987) and Keith Jarrett's At the Blue Note: The Complete Recordings (ECM, 1995).

Rainbow Studios relocated in 2004 and, in addition to further ECM recordings, has continued to represent a breeding ground for albums ranging from Oregon's Prime (Cam Jazz, 2005) and Ulf Wakenius's Notes From The Heart (Plays The Music Of Keith Jarrett) (ACT, 2006), to pianist Yelena Eckemoff's upcoming Nocturnal Animals (L&H, 2019) and Helge Lien's Nattsukashii (Ozella, 2011). An accomplished mainstream jazz guitarist, Kongshaug also released one album each on ACT (1998's Other World) and Hot Club Records (2005's All These Years).

Having been involved in literally thousands of recordings, many of them masterpieces across multiple genres and including approximately 700 albums for ECM alone, Kongshaug was recognized in 1992 with a Special Award Diploma by the German Spellemannprisen, and a Studio Award by the Norwegian Gammelang Award in 2012, amongst others.

From his family: "Our beloved dad, grandad, father in law and husband, Jan Erik Kongshaug died early today, November 5th. 2019. Thank you for all the memories. Now there is only silence. Rest in Peace." He may be silenced, but with a legacy this vast, it's a certainty that the name Jan Erik Kongshaug will continue to be known and respected for many generations to come.

This interview took place as part of a three-week trip to Norway in 2010, covering both the Kongsberg and Molde Jazz Festivals, as well as spending a week in Oslo, where a visit to Rainbow wasn't just a wish; as is the case for many ECM fans, the opportunity to visit Rainbow and speak with Kongshaug was more like a pilgrimage.

RIP,   Jan Erik Konsgaug. [Editors Note: From July 6 to July 26, 2010, All About Jazz Managing Editor John Kelman will travel throughout Norway to cover both the Kongsberg Jazz Festival (also participating in Silver City Sounds) and Molde Jazz. He'll also spend a week between the two famous festivals in Oslo, where he'll check out the scene, talk to musicians and labels, and visit the legendary Rainbow Studio for a look around and an interview with engineer Jan Erik Kongshaug, who has participated in hundreds of ECM recordings. He'll publish every second or third day, so be sure to follow him as he goes from the east coast to the west, in search of Norwegian artists known and unknown].

The weather in Oslo can be mercurial: one moment, raining; the next, sunny. But while inclement weather scuttled a chance to travel to Tonsberg for Slottsfjell Festival and another chance to catch Jaga Jazzist, overall there's been little else so bad as to ruin what has been a tremendous trip. Walking around Oslo, the striking mix of old and new can be found on every street corner. And while Oslo has its fair share of problems endemic to larger cities—drugs, the homeless, areas where closures have made for some less attractive spots with boarded up shops—overall it's a gorgeous city, with beauty to be found wherever the eye wanders. It's also a dog-friendly town; Vigeland Sculpture Park has, in fact, a dog park within its 80 acre space, and it's hard to imagine a more beautiful place to bring your dog, meet people and other canine friends.

As the week in Oslo approached its end, meets with artists and labels continued to take up considerable (but always pleasurable) time. But before a lunchtime meet with guitarist Stian Westerhus and a mid-afternoon drink with pianist Helge Lien, one of the more compelling reasons to come to Oslo in the first place: a chance to visit Rainbow—the legendary recording studio where so many albums on the German ECM label have been recorded—and an opportunity to speak with the studio's owner, Jan Erik Kongshaug, the man who, alongside ECM head/producer Manfred Eicher, helped redefine jazz in the early 1970s.

July 16: A Morning at Rainbow Studio with Jan Erik Kongshaug

Oslo has recording studios located in some of the oddest places. 7etage is literally located on the seventh floor of an old building in the center of Oslo, across the hall from saxophonist Karl Seglem's NORCD office and practice room. Rainbow Studio is one of the last remaining "big" studios in Oslo, inauspiciously located on the east side of the city. It's the second Rainbow, in fact, owner/engineer Jan Erik Kongshaug having moved the original Rainbow of 20 years to its current location six years ago for the most mundane reason: the studio was situated above a bar which, after many years, began to feature live music that would leak through the ceiling into the studio. Despite the contract stipulating no live music, and Kongshaug taking legal action, the problem became protracted, and so he chose to relocate rather than continue fighting.

For an engineer who has built an international reputation for his almost unparalleled instincts and keen attention to sound and detail, it may come as a surprise to learn that Kongshaug is largely self-taught. "I started playing accordion when I was seven or eight," Kongshaug explains, "because my father was a professional guitarist. We lived in Trondheim, where I was born, but he moved to Sweden, where he was a professional guitarist for many years; he was quite good, actually. He asked me what I wanted to play, and I said, 'Piano,' but we couldn't afford a piano so I got an accordion instead [laughs]. When I went to high school I began playing guitar, when I was fourteen or fifteen."

"Every weekend I was playing at parties in the area where I lived, and when I finished high school I got a job as a guitarist on a cruise ship. So I went around the world; the base was New York, so I was there ten times in one year, and I heard a lot of great stuff—it was 1963/64—I heard Coltrane live, and Miles' new band [Miles Davis] with Herbie Hancock...it was fantastic, really a great year. And the job onboard wasn't very busy, I played for a lot of American tourists; we had quite a nice time, because we played three hours in the night, and when the boat was at sea, we played, but when we were in the harbor we were off. We were not like the other people on the boat—they had to work shifts. But for us, if we had three days in Tokyo, we had three days off in Tokyo. I really got to see the world at that time."

It was a different time to be coming up as a musician in Norway, as its now famous educational system, with world-renowned institutions like the Trondheim Academy—responsible for musicians like saxophonist Hakon Kornstad and trumpeter Arve Henriksen—didn't exist. "I got interested in recording because I had a tape recorder with two microphones, and that's how I got started. Then I came back to Trondheim after a year, and I started studying electronics, which I did for two years at a school there. Then I was planning to go into broadcasting, to NRK [Norwegian Public Broadcasting]—they had education for sound engineers—but the year when I wanted to go, they couldn't take any more people, and so that's why I went into electronics instead. Then, after two years of electronics I got the job at Arne Bendiksen Studio [where some classic early ECM albums were recorded, such as saxophonist Jan Garbarek's 1970 debut, Afric Pepperbird]. It was because I played guitar; there was a bandleader here who had a lot of TV gigs, and he didn't have a guitar in his band, so he hired me, had me come to Oslo with him. He had a lot of jobs at Bendiksen studio, and he recommended me. I couldn't do anything; but I got the job; I had an electronics background but no engineering education."

Kongshaug is, then, the poster boy for the value of learning on the job. But it was nothing short of serendipity when, three years later, he had a chance meeting with a young Manfred Eicher, who had just started a label called ECM. "Eicher had heard the band [Garbarek, guitarist Terje Rypdal, bassist Arild Andersen and drummer Jon Christensen] and wanted to record them, so he came to Oslo to record this quartet. And they actually recorded this album [Afric Pepperbird] outside Oslo at Henie Onstad Arts Centre [see Norwegian Road Trip, Part 2]; they also had a studio there. Bjørnar Andresen was the engineer, but the room wasn't suited for this band, it was too live; for a classical recording it was nice, but not for a band with drums and electric guitar. So they came to Bendiksen Studio to do it in the evenings, because I had a session in the daytime, and so it was just a coincidence that I met them. Manfred didn't know me, and I didn't know him, but that was the beginning."

Kongshaug and Eicher have been working together for forty years, and have recorded hundreds of albums together—first, at Bendiksen, then at Talent Studio, and then at Rainbow. The relationship just seemed to click. "We had the same attitude towards sound, it was very easy. We didn't have to talk; it just worked, and it sounded nice."