Ulf Wakenius: Notes from the Heart 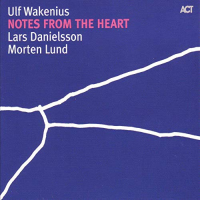 One of the most significant artists of the past forty years, pianist Keith Jarrett continues to base his ever-evolving style on a remarkable stream-of-consciousness approach to improvisation. But with Jarrett focusing his energy almost exclusively on his longstanding Standards Trio and improvised solo piano performances for the past two decades, it's easy to forget that he's also written a wealth of memorable compositions. Still, Jarrett asserts that improvisation is nothing less than composition in real time, and he's absolutely right.

But Jarrett's influence reaches beyond pianists. His ability to combine an almost fragile lyricism with richer complexities and imbue the jazz language with an appealing folksiness has influenced more than one generation of players on other instruments, including the equally influential guitarist Pat Metheny.

Swedish guitarist Ulf Wakenius' style has clearly been filtered through Jarrett and Metheny, but that's not to imply he lacks his own voice. On Forever You (Stunt, 2004) he demonstrated their same deep respect for melody and the essence of song, but with an economical approach that belied his considerable virtuosity. On Notes from the Heart—the first album ever to feature a single artist paying tribute to Jarrett the composer and the performer—Wakenius turns his attention to interpreting his music. By approaching not only some of Jarrett's more well-known songs, but also material from his solo piano improvisations, Wakenius proves Jarrett's statement that the real time compositional nature of improvisation is more than self-justification for abandoning conventional writing.

Restricting himself to classical guitar, Wakenius mines a cross-section of material from many stages of Jarrett's career, from the delicately melancholic and Latin-informed "Everything That Lives Laments, from The Mourning of a Star (Atlantic, 1971) to the more ostinato-based, groove-centric title track from The Cure (ECM, 1991). Jarrett's European Quartet is represented by the gently balladic "Innocence from Nude Ants (ECM, 1980), the vulnerable beauty of the title track to My Song (ECM, 1977), and the more up-tempo folksy complexity of "The Windup, from Belonging (ECM, 1974).

The American Quartet is represented here, as is the Standards Trio. Throughout, Wakenius—often layering his linear lines over an overdubbed rhythm guitar track—is sensitively accompanied by two long-time associates: bassist Lars Danielsson, who also adds occasional piano and cello, and drummer Morten Lund.

But the most compelling pieces—and the best evidence of Jarrett's compositional sensibility in any context—are those fashioned from his solo piano works. "Memories of Tomorrow, better known as "Köln II C from The Köln Concert (ECM, 1975), is an elegant bossa, while "Mon Couer Est Rouge, from Concerts (ECM, 1981) is a profoundly touching duet with Danielsson on piano.

Throughout, Wakenius' evocative playing—at times exploring the meaning of a single note, elsewhere more elaborately fashioned phrases—digs deep into Jarrett's material, dispensing with all artifice and getting right to the core. Notes from the Heart is aptly titled. Wakenius pays reverent homage to Jarrett in the best way possible—by demonstrating Jarrett's unequivocal influence and fully subsuming it in his own pure and unaffected musical approach. Simply beautiful.

Memories of Tomorrow; Dancing; Innocence; The Windup; My Song; Mon Coeur Est Rouge; Everything That Lives Laments; The Cure; So Tender; U-Dance; Prayer.