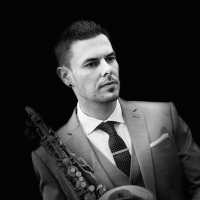 Cleveland, OH jazz-fusion group Matthew Alec and The Soul Electric have got a rhythmic step in the down and dirty direction with some legit golden era funk that grabs the grooves of Tower of Power and snazzy sensibilities of The Greyboy Allstars.

Matthew Alec is a professional jazz and popular music saxophonist, founder and Executive Producer at Cleveland Time Records, and bandleader for the high-energy jazz fusion group Matthew Alec and The Soul Electric. Nominated as “Cleveland’s Best Horn Player” by Cleveland Scene Magazine in 2009, Matthew has performed for over 20 years and holds a Bachelor’s Degree in Music from Kent State University. He has toured nationally and has opened for a number of A-list acts including Earth, Wind, and Fire, Incubus, Robert Randolph and The Family Band, Keane, Average White Band, Lupe Fiasco, OAR, Ozomatli, Bret Michaels, Rusted Root, and others. He has performed with former Saturday Night Live Musical Director, CBS Orchestra member, and Blues Brothers bandsman Tom “Bones” Malone, internationally-acclaimed bassist Victor Wooten and his brother Roy “Futureman” Wooten, Saturday Night Live trombonist Steve Turre, Kenny G bassist Vail Johnson, Grammy-winning Ohio Players alumni Billy Beck, and Parliament-Funkadelic bassist Ben Powers, Jr. He has recorded with Rock and Roll Hall of Fame inductee, Parliament- Funkadelic and Talking Heads member Bernie Worrell and aforementioned Tom "Bones" Malone. His debut album as a leader "Cleveland Time" (which features Malone) was released in 2021 and charted for several weeks on the NACC Jazz Radio Chart, peaking at #13, and received international press from Jazziz Magazine, All About Jazz, JazzMonthly.com, SoulTracks.com, Broadway World, WBSS Media (UK), Glide Magazine, Cleveland.com, and many others. The hard bop blues “Blues for McCoy” (written by Matthew) off the album was a Semi-Finalist in the International Songwriting Competition for 2021 as well as one of All About Jazz’s most “Popular Jazz Songs” of 2021. At Kent State, he studied both 20th century classical music and jazz with Grammy-nominated saxophonist Greg Banaszak and longtime Cleveland Jazz Orchestra trombonist and composer Chas Baker. He is also a two-time attendee of the highly exclusive Inside / Outside Retreat for professional saxophonists held at Wooten Woods just south of Nashville, Tennessee. There he studied music, nature, and life in general with the “who’s who” of world-renowned jazz virtuosos, including saxophonists Bob Reynolds, Bob Franceschini, Joshua Redman, Jeff Coffin, Kirk Whalum, and Steve Wilson, pianist Aaron Goldberg, bassist Victor Wooten, and drummer Roy “Futureman” Wooten. Matthew is also a founding member of “Cleveland’s Best Original Band,” Winslow. The original soul and funk outfit earned the moniker from both Cleveland Scene Magazine and Cleveland’s Fox 8 News. For nearly 10 years until the group parted ways he performed in many cities across the United States and recorded two full length albums as a soloist with the group: Crazy Kind of Love (2008) (which featured Bernie Worrell) and Left of the Right Direction (2013), the latter of which he co-produced.

Both drew national critical acclaim, features on AOL.com, MSN.com, and Reverbnation.com, and many radio spins across the U.S. As of 2020, Matthew also founded Cleveland Time Records, a record label that records, distributes, and promotes jazz artists from the city of Cleveland. Cleveland Time was its aptly- titled initial release. Matthew is proudly sponsored by DeJacques Straps and Remic Microphones (Denmark).

"Cleveland, OH jazz-fusion group Matthew Alec and The Soul Electric have got a rhythmic step in the down and dirty direction with some legit golden era funk that grabs the grooves of Tower of Power and snazzy sensibilities of The Greyboy Allstars" - Glide Magazine "the group has shared their first single "Give What You Take", premiering now with Glide Magazine. The new track mixes traditional jazz elements with pop hooks to create a genre-bending listening experience like no other." - Broadway World

From: Cleveland Time
By Matthew Alec

From: Cleveland Time
By Matthew Alec

All About Jazz musician pages are maintained by musicians, publicists and trusted members like you. Interested? Tell us why you would like to improve the Matthew Alec musician page.