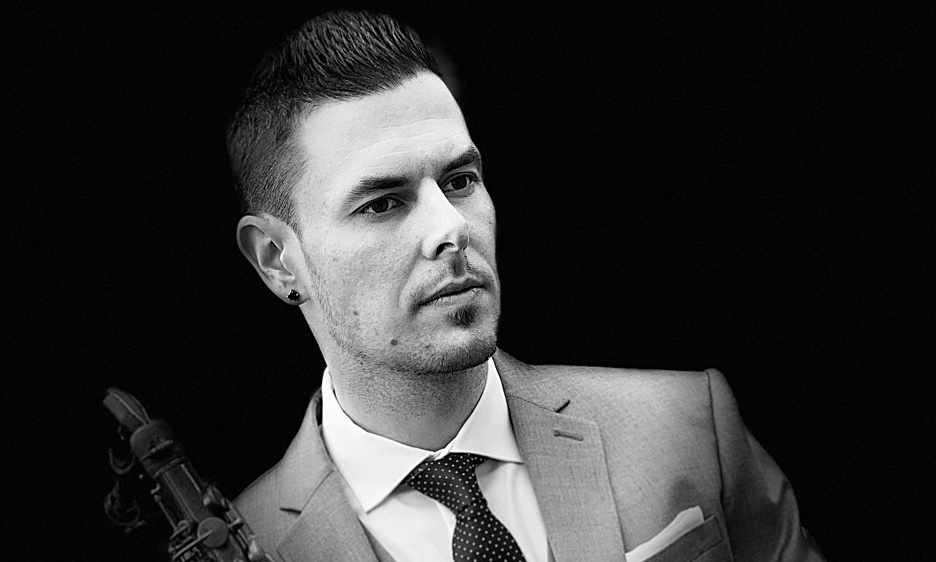 Saxophonist, Executive Producer at Cleveland Time Records and bandleader for the jazz fusion group Matthew Alec and The Soul Electric. Nominated as 'Cleveland's Best Horn Player' by Cleveland Scene Magazine, Matthew earned his Bachelor's Degree in Music from Kent State University in 2007. While at KSU, he studied both 20th century classical music and jazz with Grammy-nominated saxophonist Greg Banaszak and longtime Cleveland Jazz Orchestra trombonist and composer Chas Baker. He is also a two-time attendee of the highly exclusive Inside / Outside Retreat for professional saxophonists held at Wooten Woods just south of Nashville, Tennessee. There he studied music, nature, and life in general with the 'who's who' of world-renowned jazz virtuosos, including saxophonists Bob Reynolds, Bob Franceschini, Joshua Redman, Jeff Coffin, Jeff Coffin, and Steve Wilson, pianist Aaron Goldberg, bassist Victor Wooten, and drummer Roy 'Futureman' Wooten. He has had the pleasure of performing with Victor Wooten, Roy 'Futureman' Wooten, Saturday Night Live trombonist Steve Turre, and Kenny G bassist Vail Johnson.

Matthew is a founding member of Cleveland's Best Original Band, Winslow. The original soul and funk outfit earned the moniker from both Cleveland Scene Magazine and Cleveland's Fox 8 News. For nearly 12 years until the group parted ways he performed in many cities across the United States; opening for the likes of Earth, Wind, and Fire, Incubus, Robert Randolph and the Family Band, Keane, Average White Band, Lupe Fiasco, OAR, Rusted Root, Bernie Worrell, Ozomatli, Bret Michaels, and many others. He has also recorded two full length albums as a soloist with the group: Crazy Kind of Love (2008) which featured Parliament/Funkadelic keyboardist and Rockand Roll Hall of Fame Inductee Bernie Worrell and Left of the Right Direction (2013), the latter of which he co-produced. Both drew national critical acclaim, features on AOL, MSN, and ReverbNation, and many radio spins across the U.S.

In 2017, he formed the Cleveland-based jazz fusion act Matthew Alec and The Soul Electric, who's debut album Cleveland Time just came out which features jazz and soul legend Tom 'Bones' Malone and has earned spotlights in a number of large publications including Jazziz, SoulTracks, Glide Magazine, Cleveland.com, and Broadway World. Last year, Matthew also founded the nonprofit record label Cleveland Time Records which is dedicated to creating and promoting jazz from the NE Ohio area. Cleveland Time is its first release.

I earned a bachelor's degree in classical music from Kent State University. The degree itself focused largely on 20th century saxophone concertos, but jazz was certainly a huge focus for me, if not my main focus. There were many wonderful teachers there, but my main instruction and influence came from saxophonist Greg Banasazak and trombonist/composer Chas Baker. Greg is a highly accomplished musician in both the classical and jazz idioms so he was a good fit for me personally. Chas was the longtime jazz ensemble instructor as well as a longtime member of the Cleveland Jazz Orchestra and he was instrumental (no pun intended) in teaching me a lot of the rudimentary elements of jazz like time, swing feel, and guide tones between chords. Influences for me are all across the board, but I draw the most inspiration from Michael Brecker, John Coltrane, Tom Scott, David Sanborn, and Kenny Garrett. I love saxophonists with a strong tone and a strong upper register. In college, I listened the most to swing era players, especially Coleman Hawkins, but my tastes evolved as my facility improved and I really grew to love the more modern sound. Everything from hard bop to fusion.

It was an evolutionary process for me. I started playing the saxophone in 5th grade, but I did not take it seriously. Aside from mandatory band classes, the saxophone went largely untouched by me until the very end of high school. It wasn't that I didn't love music, I've loved music (especially soul music) since I was very young, but I didn't really see the saxophone as a viable instrument that could be played in popular music until well into high school. Of course it is, but most popular music at the time ( late1990's) didn't use saxophone and I didn't know anything about jazz yet. I befriended another guy in high school who played alto saxophone and was fairly well versed in Charlie Parker, so he hipped me to the music and I got absolutely hooked. When I entered college at Kent, I knew I wanted to be a part of the music school, but I was still undecided as a major. I believe it took about a semester there for me before I decided to make the commitment to the music.

For me, I'm always going for a huge saxophone tone that's as dark as I can make it. I also try to steer away from a ton of vibrato unless the tunes really needs it. Ironically, listening to the recent recordings on Cleveland Time, I've found my sound has gotten fairly bright, brighter than I would like truth be told, but I also think the mix contributed to that a bit. I play so much in the altissimo register that it's hard to keep the sound dark sometimes. I recorded the album on a King Super 20, but I've recently switched to a Selmer Mark VI and I think that's darkened the tone a bit. The other thing that I've found is that my tone and phrasing style change quite a bit depending on the groove and style of the tune. I'm a bit of a chameleon in that way. It's not really intended... I've just got so many influences in my psyche that come out depending on what I hear. When it comes to my approach to writing, I pretty much always write the melody first. I go for a strong melody that gets in your head (hopefully) on every tune no matter what the style. I've written a number of straight-ahead and funk pieces now and that approach is the same either way for me. I figure out the chords after I have the melody.

My old group Winslow toured quite extensively a little less than a decade ago. There were a number of great moments (some I likely wouldn't feel comfortable sharing here!), but the one that stands out perhaps the most was our tour down to SXSW in 2013. We play two separate shows which I don't remember all that well, but the experience in and of itself stands out to me. The city of Austin is a beautiful place which really comes to life during that festival.

There are a number of venues that I've come to love not only around the city of Cleveland but also across the US. For brevity's sake, in recent months the Bop Stop in Cleveland has been a gracious host to my group and I love playing there. It's acoustically pleasing and visually it presents a great backdrop to this music.

Beyond a shadow of a doubt: Directions in Music: Live at Massey Hall with Herbie, Brecker, and Roy Hargrove. Not only is it an amazing album/performance, but I think it holds a sentimental place with me because I saw them live at Carnegie Hall at a different point on that tour and got to meet all three of them. Not only is Michael Brecker my favorite saxophonist, but the way they communicate with one another on that recording is other-worldly, Herbie's comping adds this spiritually-mystical element, and the solos are all absolutely perfect. A very close tie for second would be Coltrane's A Love Supreme and