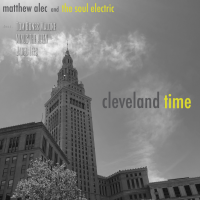 Jazz fusion ensemble Matthew Alec and The Soul Electric has released their new album Cleveland Time via Cleveland Time Records. Working alongside Cleveland-based producer Jim Stewart, the album was recorded in two separate sessions because of the ongoing pandemic. Fans can stream Cleveland Time from here. Cleveland Time marks the first album release from the group ...

Matthew Alec is a professional jazz and popular music saxophonist, founder and Executive Producer at Cleveland Time Records, and bandleader for the high-energy jazz fusion group Matthew Alec and The Soul Electric. Nominated as “Cleveland’s Best Horn Player” by Cleveland Scene Magazine in 2009, Matthew has performed for over 20 years and holds a Bachelor’s Degree in Music from Kent State University. He has toured nationally and has opened for a number of A-list acts including Earth, Wind, and Fire, Incubus, Robert Randolph and The Family Band, Keane, Average White Band, Lupe Fiasco, OAR, Ozomatli, Bret Michaels, Rusted Root, and others