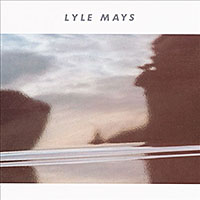 Today's Rediscovery falls under the category of "where is he now?" I first heard of keyboardist Lyle Mays in 1977, when Gary Burton's quartet (with guest Eberhard Weber), played at the Glebe Collegiate High School auditorium in my home town of Ottawa, Canada. After the show, speaking to the other members of the group—electric bassist Steve Swallow, drummer Danny Gottlieb and a then just starting out Pat Metheny—the guitarist told me that he and Gottlieb were leaving the vibraphonist in just two weeks to form his own group, and that he'd found a pianist "who's going to be the next Keith Jarrett."

Well, 38 years later, pianist Mays hasn't exactly attained Jarrett's rarefied status, though he certainly has a large community of fans who wonder why he's fallen largely off the map, with his last (and only fifth) solo recording, Solo: Improvisations for Expanded Piano (Warner Bros.), released nearly fifteen years ago. Still, Mays' tenure in Metheny's flagship Pat Metheny Group, from its humble beginnings in 1977 through to its (so far final) 70-minute epic, The Way Up (Nonesuch, 2005)—and the accompanying world tour that culminated in a massive outdoor show at the Festival International de Jazz de Montréal the same year—has ensured Mays a significant place when the history of jazz from the latter quarter of the 20th century through to early in the new millennium is written. As co-writer, alongside Metheny, of many of PMG's most memorable compositions—a lengthy partnership that truly made the pair the Lennon & McCartney of jazz—the keyboardist's importance in that history is even more assured.

That Mays has only released a handful of albums under his own name, and remained largely silent since 2005 has, however, been both curious and frustrating to many of the longtime fans. Many wish the guitarist would bring PMG back into action, despite his Unity Group—heard on Kin (<—>) (Nonesuch, 2014) and a year-long world tour that hit destinations as distanced as Ottawa, Canada and Stavanger, Norway—appearing to be the new Pat Metheny Group in everything but name only. The guitarist's current group—centred around drummer of choice Antonio Sanchez (the only carryover from PMG), reed man extraordinaire Chris Potter, bassist Ben Williams and "utility player" Giulio Carmassi—has, it would seem, found a more equalized balanced between the kind of epic long-form writing that was endemic to PMG and the more open-ended hard-blowing band, improvisational speaking, for which the guitarist has been searching in recent years.

That the best album in Mays' diminutive discography as a leader happens to also be his first is, on one hand, a remarkable achievement but, on the other, a shame that the keyboardist has, in the ensuing years, been unable to follow it up with more...and better. Street Dreams (Warner Bros., 1988) was certainly a worthy follow-up to the keyboardist's leader debut, but its more urban vibe is somehow less successful when compared to the cinematically expansive music of the simply titled Lyle Mays, released two years earlier.

Something that the keyboardist demanded of this stellar sextet throughout this collection of eight Mays originals. Mays' writing travels from wide open vistas evoked by the opening "Highland Aire" (with guest Patrick Skye contributing Uillean Pipes for added authenticity) to darker expanses intimated in the opening atmospherics of "Teiko," a piece that then heads into a main section with a strangely familiar bass riff referencing Weather Report's title track to Black Market (Columbia, 1976) while, at the same time, going places to which the fusion supergroup never did. There's plenty of solo space for Mays' ever-impressive piano work throughout; and despite having so many heavy hitters in his group, they are here primarily as ensemble players to realize a compositional vision that, along with Mays' own use of synths for color and texture (as has always been the case with PMG), somehow manages to always feel organic.

Still, Frisell's idiosyncratic guitar is a defining voice throughout Lyle Mays, whether he is doubling Mays' synth lines on the knotty (and appropriately titled) "Slink" or taking a rare solo at the climax of "Ascent"—the climactic conclusion to the expansive, three-part "Alaskan Suite." The 14 minute-long suite builds from Johnson's opening bass solo, layered over a freely structured and ethereal "Northern Lights"; moves into a wind-driven "Invocation" that slowly unfolds into an atmospheric piece of profound beauty; and, finally, turns to the emergent groove of the aptly titled "Ascent" and the suite's powerful finish before an anthemic "Close to Home" brings the album to an absolutely perfect conclusion.

Frisell's playing on Lyle Mays represents some of the absolute best work he's ever done as a guest on someone else's record; his accompaniment as characteristically skewed as ever but equally nothing less than strangely perfect, while his relatively rare but otherworldly soloing is a revelation.

It's a shame that Mays was unable to keep this group together, although many of them appeared on a few of Street Dreams' tracks. Still, that album suffered from a lack of cohesion, whereas Lyle Mays is the single most unified statement the keyboardist has ever made. An album that, more than a collection of discrete tracks, is an engrossing 48-minute journey where every composition is in exactly the right place...as is every note from everyone in the group.

Lyle Mays is a personal desert island disc—one whose 1998 24- bit remaster and reissue on Warner Bros. reveals hitherto unheard detail. While its place as a Rediscovey could be questioned because it invariably gets spun a few times (or more) every year, it still qualifies because, between the warmer, 24-bit remaster and a first encounter on the Tetra speakers, Lyle Mays has, quite simply, never sounded this good. It's truly like hearing the record for the first time.