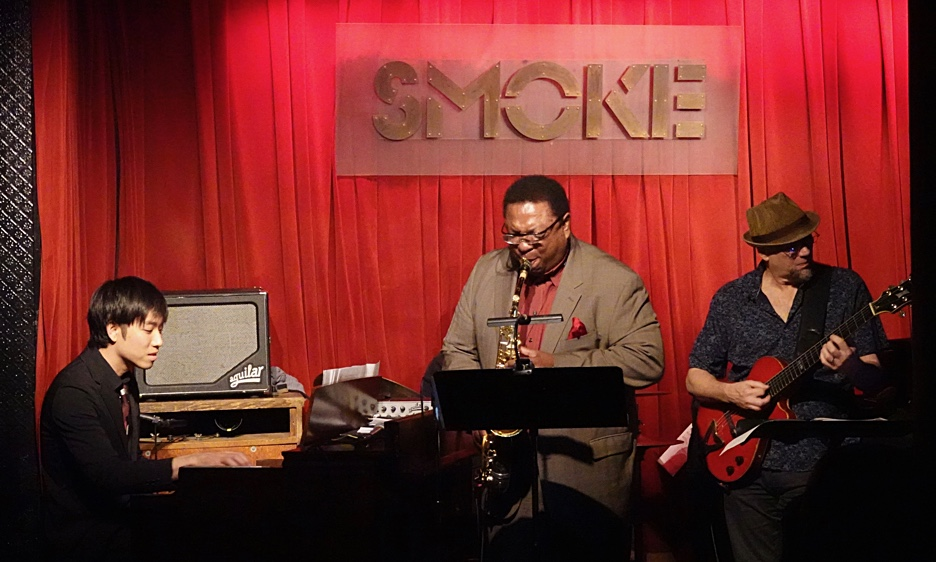 The Japanese people's love for jazz, rock, blues and other forms of music with African-American roots has been well established for decades. Working bands and musicians at all levels of fame regularly make the Land of the Rising Sun a destination and are met with uniquely polite audiences whose intense devotion can border on the worshipful. In the improvisational idiom of jazz, Japan's fertile musical culture has developed home grown talents like pianist Toshiko Akiyoshi, saxophonist Sadao Watanabe, and trumpeter Terumasa Hino—just three of the well-established Japanese jazz musicians enjoying successful careers.

Now, along comes alto saxophone great and jazz educator Vincent Herring with the bright idea to put together a three-night, nine-set series in late June to showcase a dozen mostly undiscovered Japanese musicians Herring knew through his travels and from meeting in his classroom at William Paterson College and on the working bandstand. His concept for the first New York Japanese Jazz Festival was to share his spotlight with a dozen excellent but lesser known and up-and-coming musicians and do it in a prestigious spot like New York's Smoke with its seriously cool jazz scene, hip audience and great acoustics. And he pulled it off.

Opening night saw some of these Japanese talents of full display. Kicking off the evening, the ebullient Akiko Tsuruga led a quartet made up of herself on organ, Fukushi Tainaka on drums, nimble Ed Cherry on the electric guitar, and the inimitable Jerry Weldon blowing bluesy tenor saxophone. The group blasted right off into the Nat King Cole standard, "L.O.V.E.," and didn't look back, making stops along the way to cover some cool Wes Montgomery and a soulful Slide Hampton blues. Herring's idea for a multiple-day event was to focus on Japanese jazz players, not so much Japanese jazz composition or styles, yet it was intriguing to hear a Japanese folk song Ms. Tsuruga introduced as the second number; she played it once on the organ in its traditional form and then again as she'd arranged it for the ensemble. The band, anchored by Cherry's sweet guitar chords, Tsuruga's softly gurgling Hammond and incisive solos from Weldon on tenor, bent and re-worked the traditional tune into something uniquely cross-cultural and new. A rocking, funky version of "Mack the Knife" closed the set, reminding listeners—if any needed reminding—of the pre-eminent brilliance of the soul jazz organ trio and quartet, a musical style that, while it may be less heard today than other jazz styles, is always warm and welcoming.

The impresario himself, Professor Herring, took the stand in the second set, taking the alto saxophone part in Takahiro Izumikama Quartet featuring Takahiro Izumikama on organ with Malik Washington on the drums and the exquisite Paul Bollenback on electric guitar. Herring's vast talents were used to great advantage—his Charlie Parker-inspired alto runs and punchy solo flights were juxtaposed against and over the organ and guitar, taking the band's attack to exciting heights. The set included sharp versions of jazz standards by John Coltrane ("Impressions") and Thelonious Monk ("Evidence") filled with brilliant work by Bollenback's guitar and Herring's alto. Mid-set came a long, evocative presentation of George Coleman's "Amsterdam After Dark"—an interesting choice to play in a club only a block away from Amsterdam Avenue, though the composer may have had the lovely Netherlands capital in mind when he wrote the tune. Izumikama's bubbling organ was interspersed between Herring's alto solos, with Bollenback and Herring joining forces for a tasty, quiet guitar-sax outro. Next came Izumikama's emotive original, "Walk Alone," a rewarding tour through aloneness as expressed on a soulfully-played Hammond organ. Wes Montgomery's "Road Song" seemed to be the perfect set-closer—a romping good showcase for Paul Bollenback's major league guitar chops—and the quartet did more than justice to the tune. A surprise followed—a second original tune by Izumikama, the leader taking the audience back to a more contemplative jazz space and ending the set on a tender note.

The late set featured the Tomoaki Baba Quartet with Tomoaki Baba on saxophone, Tommaso Gambini on guitar, Johnathan Barber on the drums, and William Gorman on Hammond organ.

On Wednesday the festivities opened with the Tadataka Unno Trio featuring Tadataka Unno on piano, and the great Essiet Essiet on bass; followed by the Miki Hayama Quintet with Miki Hayama on keyboards, Mark Shim on horns, Jamie Baum on flute, Matt Brewer on bass, and Kweku Sumbry on the drums. The late set brought on the Rina Yamazaki Trio with RINA on piano, Tamir Shmerling on bass, and Eviatar Slivnik on the drums.

Kudos to Smoke and especially to Vincent Herring for producing the 2019 New York Japanese Jazz Festival. Hopefully, this year's festivities are the first edition of an annual event.