"Ed is a great, soulful, swinging underrated player deserving of wider recognition."-bill milkowski 1/13/11"An expressive instrumentalist, Cherry has a hip, melodic approach that is a refreshing contrast to guitarists who frequently resort to playing "finger music," the execution of rapid streams of notes that serve no musical purpose other than to fill space"-jim ferguson:jazztimes- "02'*"particularly dazzling"-"cherry's guitar had the young bar crowd dancing"-kay cordtz:blues review-5/10 ***Born in New Haven,Conn.,After moving to New York in 78',Ed Cherry played guitar with Dizzy Gillespie from 1978 to 1992, performing in Gillespie's quartet, big band and with The United Nation Orchestra, which recorded the Grammy Award-winning Live at Royal Festival Hall (Enja) 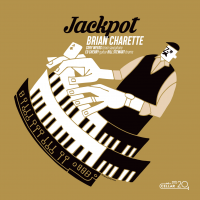 In the tradition of some great Hammond organ players of the past, such as Jack McDuff, Melvin Rhyne, Don Patterson, Larry Young and Jimmy Smith, one leading practitioner on this instrument, Brian Charette, wanted to write some swinging and soulful bebop tunes which would honor the memory of these past greats. The musicians Charette chose to ...

After a 2-year hiatus amid the Covid pandemic, Zinc is announcing the summer lineup of its highly successful jazz series produced by New York-based concert promoter, Charles Carlini of In Touch Entertainment. The programs comprise Piano Jazz and Guitar Masters evenings on select Mondays and Tuesdays. All these performances will continue to be a regular feature ...

On March 20th and 21st, the Alternative Guitar Summit presents its annual two-day music festival, part of the NYC-based Summit's month-long celebration of innovative guitar music. Unlike years past, the 2021 Alt Guitar Summit Festival will be held online and thus accessible to global audiences despite the Covid 19 pandemic. And to accommodate all music lovers ...

The confluence of the stars. Our “listeners' favorites" show and the infamous DrJ New Year's Eve warmup together! How greasy could it be? Well, very. We've got some of your favorites from Shows 341-350 as well as some funky stuff from older shows that got you resonated. No disco, though... sorry. But you can still crank ...