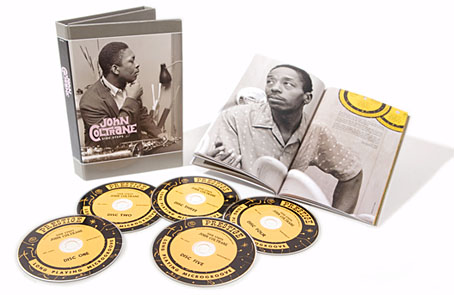 The 5-CD Side Steps follows two other Prestige box sets—the 6-CD Fearless Leader (2006) and 5-CD Interplay (2007)—which together catalogue saxophonist John Coltrane's recordings for the label 1956-58. The three boxes, each packed with extraordinary music, chronicle on parallel paths the years during which Coltrane's revolutionary style began to emerge, but before he achieved iconic status first, from 1959, on Atlantic, and then, from 1961 until his death in 1967, on Impulse!.

Fearless Leader collects Coltrane's albums as leader, Interplay his albums as co-leader, and Side Steps those albums featuring Coltrane as a featured soloist on sessions led by other musicians. The distinctions have blurred since the release of the original vinyl LPs: as Coltrane's star rose, some albums first released under other leaders' names were subsequently reissued by Prestige with Coltrane credited as leader or co-leader, and were on occasion also retitled. With this source of potential confusion in mind, the trio of boxes is a convenient way of archiving Coltrane's prolific recordings for the label.

None of the three boxes include Coltrane's contemporaneous work with trumpeter Miles Davis for Prestige, which are instead available on the 4-CD The Miles Davis Quintet: The Legendary Prestige Quintet Sessions (2006).

In the broad historical context, it should be remembered that the Prestige boxes do not, of course, include two important albums Coltrane made for other labels during the same period: Blue Train (Blue Note, 1957), which he led, and, with pianist Thelonious Monk, Thelonious Monk with John Coltrane (Riverside, 1957). The second of these has been joined by Thelonious Monk Quartet with John Coltrane at Carnegie Hall (Blue Note), recorded in 1957 but lost in radio station Voice of America's tape library until its chance discovery in 2005.

Side Steps programmes 12 albums featuring Coltrane, presented in session order over five CDs, which during the course of their six and a half hours playing time document, no less dramatically than either Fearless Leader or Interplay, the development of Coltrane's improvising style, from May 1956 through January 1958.

The only exception to the session order chronology of the five discs is the 12-minute title track to Rollins' Tenor Madness (the only track on the album on which Coltrane played), which, presumably for maximum playing time reasons, is included at the beginning of Disc Two rather than midway through Disc One.

In addition to charting Coltrane's growth as a soloist, the 12 original albums are all early period hard bop works of the first order. As well as saxophonists Coltrane, Rollins and Ammons, and pianists Hope, Waldron, Garland and Dameron, the collective soloists include saxophonists Hank Mobley, Jackie McLean, Sahib Shihab and Pepper Adams, trumpeters Donald Byrd and Idrees Sulieman, flautist Jerome Richardson, and drummers Philly Joe Jones and Art Taylor. Greats all of them, here in hard bop's first flush of glory.

The material used at the sessions ranges from originals, mostly written by the leader on the date, to jazz standards, tunes from the American songbook, and barely rebooted, classic blues structures. Hope's Informal Jazz, Waldron's Mal/2 and The Dealers, and Draper's Featuring John Coltrane are each equal parts originals and songbook standards. Garland's four albums are mostly composed of bop and songbook standards. Ammons' session included three bluesy originals (written by Waldron, the pianist on the date) and one songbook standard. Dameron's Mating Call is the only album entirely composed of originals (a leading bop composer and arranger, Dameron had previously written the warhorses "Good Bait," "Our Delight" and "Hot House"). "Tenor Madness," written by Rollins, is a simple blues riff on which Coltrane and Rollins take extended solos and then trade fours.

The Side Steps box includes a handsomely put together 72-page booklet with rare photographs (that's pianist Elmo Hope on the open page of the illustation at the top of this review), a sessionography, an essay by the writer Ashley Kahn, the transcript of a phone interview Kahn conducted with Prestige founder/producer Bob Weinstock in 2001 (Weinstock passed away aged 77 in 2006), and fully reproduced original album cover artwork and sleeve notes.

Of the new material, the Weinstock interview is particularly valuable. The transcript suggests a conversation lasting perhaps 45 minutes, only fragments of which have previously been published, in Kahn's A Love Supreme: The Creation of John Coltrane's Classic Album (Viking Penguin, 2002). Not included, unsurprisingly, in Kahn's book, were those passages in which Weinstock talked about the A&R activities of Impulse! and Atlantic. Weinstock likens their modus operandi to those of "vultures," who with fatter cheque books than he or Blue Note's Alfred Lion, enticed promising artists away from the pioneering independent labels who "discovered" them. At another point, Weinstock rather unconvincingly asks to be reminded which label released Coltrane's A Love Supreme (1965), Impulse!'s all-time best selling album.

While still on the theme of major label "piracy," Weinstock takes a potshot at Columbia, with whom famously Miles Davis signed before the termination of his Prestige contract: "Even Ellington, as great as he was... the time he's on CBS, he's making all these dumb records."

Elsewhere in the interview, Weinstock talks interestingly about Coltrane, as a man and a musician, and about Prestige's recording aesthetic—no rehearsals, rejected takes erased from the tape and the tape re-used, and with engineer Rudy Van Gelder and the musicians effectively producing the music while Weinstock watched ballgames on TV, volume turned down, in an adjoining room. It's a fascinating read, on and between the lines.

Most of the music on Side Steps was made in 1957, in retrospect arguably the most significant year in the otherwise pretty seamless continuum of Coltrane's development. Coltrane began 1957 as a contender for Sonny Rollins' tenor crown, but he ended it widely perceived as Rollins' equal—if not, for many contemporary observers, the new master.

Coltrane started the year as a member of Miles Davis' group and a nodding heroin junkie. In April, Davis, exasperated by his behaviour, fired him. In May, Coltrane cleaned up, going cold turkey. Heavy drugs would no longer figure in his life, though it is generally accepted that he used LSD for a while during the mid 1960s. Later in May, Coltrane moved from Philadelphia to Manhattan, shortly after signing to Prestige as a solo artist. In December 1957, Davis took him back into his band. (Without over-egging its significance in Coltrane's own music at this point, it's worth noting that on his return to Davis' group, it was to find the trumpeter experimenting with the modal song structures which would later become central to Coltrane's music). Meanwhile, from July 18 through late August 1957, and again from early September to November 6 and for a week in December, Coltrane was a member of Thelonious Monk's band during its residency at the Five Spot in Manhattan.

As 1957 progressed, Davis' wake-up call, the rejection of heroin, and the finishing school provided by Monk—with whom Coltrane regularly spent hours off the bandstand, rehearsing and analyzing music—all combined measurably to move the saxophonist forward. That Coltrane was able to make such rapid progress through the year was due in part to his own genius and determination and in part to the numerous work opportunities he was offered, including the recording sessions collected on Side Steps.

Disc One consists of two 1956 sessions, from May and November, the first led by Elmo Hope, the second by Tadd Dameron. The third 1956 session, for Sonny Rollins' Tenor Madness, is included, for reasons noted above, at the start of Disc Two. Thereafter, up until halfway through Disc Five and the concluding, January 1958 session with Gene Ammons, all the recordings were made in 1957.

On almost every successive session, Coltrane's tone, technical facility and creative intensity are measurably more advanced than on its immediate predecessor. The at times still tentative soloist heard on the May 1956 Elmo Hope session (and yes, on "Tenor Madness" too) has matured, by autumn 1957, close to the force of nature heard on Coltrane's first major selling album, Giant Steps (Atlantic, 1959).

Disc Five consists of some lesser known curiosities, from December 1957 and January 1958. The opening Ray Draper session was for the second album to be released by the 17 going on 18 year old tuba player. The pairing of tuba and tenor produces some novel sonorities, and Coltrane, the session's main soloist, is intoxicatingly on song. But there's no getting away from the fact that the tuba is built neither for comfort nor speed, and Draper's lugubrious solos do not in themselves set the world alight.

Instead, Draper brings to mind Dr Johnson's aphorism, in retort to a companion criticising the ungainly fashion in which a circus dog was walking on two legs, that "the wonder lies not in how well it does it, but in that it does it at all." That Coltrane agreed to play on the album must have been a combination of his habitual generosity towards younger artists and the prospect of a session fee. (On release from a spell in prison in the late 1960s, following conviction on drugs offenses, Draper formed a reputedly adventurous jazz-rock band, but his career continued to be blighted by heroin. He was shot and killed, an innocent bystander at a bank robbery, aged 42 in 1982).

Disc Five concludes with a January 1958 session for tenor saxophonist Gene Ammons. As a result of an unexpected excess of tenor players (it was feared Ammons wouldn't make the date, Paul Quinichette was hired to replace him, then Ammons showed up after all), Coltrane is heard on alto (on an instrument lent to him by the writer Ira Gitler). Coltrane's intonation in the upper register is sometimes less than perfect, but that aside he's practically as commanding as he already was on tenor. Closing as it does with Ammons' unreconstructed, blues drenched music, Side Steps reminds us that, however elevated it became, Coltrane's playing never lost touch with its roots.

Tracks: May 24: Tenor Madness. April 19: Potpourri; J.M.'s Dream Doll; Don't Explain; Blue Calypso; Falling In Love With Love. May 17: The Way You Look Tonight; From This Moment On; One By One.

Tracks: Our Delight; They Can't Take That Away From Me; Woody'n You; I've Got It Bad; Undecided; Soul Junction; What Is There To Say?; Birk's Works; Hallelujah.