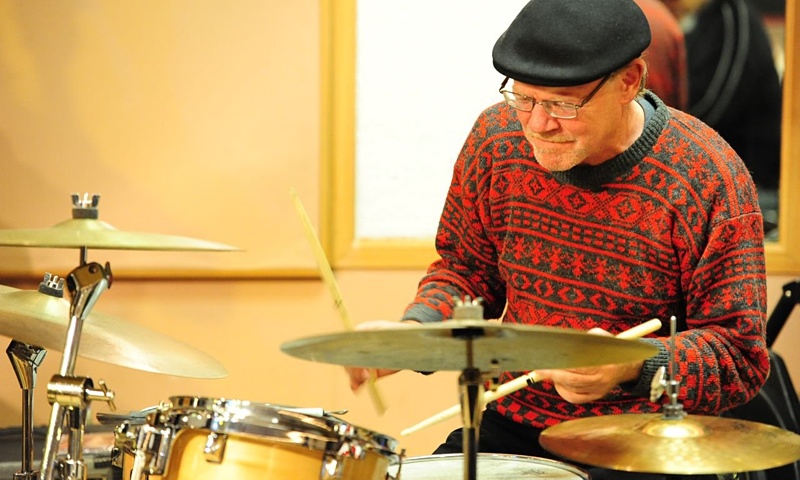 By Mike Oppenheim
August 28, 2013
Sign in to view read count
Any fan of the great American music that is jazz is surely aware that the art form's history depended on the convergence of geography, individual talents, and inspiration. Cities such as New Orleans, Kansas City, Chicago, and New York are synonymous with particular styles of jazz. One often overlooked city is Philadelphia, the birthplace and/or home to artists as diverse and influential as Pat Martino, Billie Holiday, Stan Getz, Lee Morgan, Dexter Gordon, Clifford Brown, Philly Joe Jones, Jimmy Smith, Benny Golson, Grover Washington, Jr., John Coltrane and many more. Paying tribute to this tradition of jazz in Philadelphia, and providing a contemporary slate of first-rate jazz musicians, is Dreambox Media, a strictly Philadelphia jazz label.

Jim Miller, the founder and driving force behind Dreambox Media, is a performing jazz drummer, producer, Adjunct Professor at Rowan University, Jazz History Lecturer at University of Pennsylvania, and advisory board member of JazzBridge.org and the Philadelphia Jazz Coalition. Miller has performed with preeminent artists including Anita O'Day, Larry Coryell, Tony Williams, Larry McKenna, Randy Brecker, Clark Terry, Ray Mantilla and Evelyn Simms; he has been honored with Philadelphia Magazine's award for Best of Philly Jazz Record Label (1999) and in 2013 received the Jazz Hero award, from the Jazz Journalists Association.

All About Jazz: What are the origins of Dreambox Media? Who was involved, and what was the initial conception of the label?

Jim Miller: I had a band called Reverie, I was on drums, Mark Knox on keyboards, Ed Yellen on saxophones, and Gerald Veasley on bass. We got some free studio time in New York, at a place called the Institute of Audio Research. We were pretty much guinea pigs for people taking a studio engineering class, but we ended up getting a master tape out of it. So anyway, we end up having this master tape, this is in 1980, we had the tape, and a band fund. We were a quartet, and a fifth of the share went into the band fund, where we could fix equipment, the van, whatever. So we had the money, and I said, "Let's just put this out ourselves." We had money actually saved up for a new van, but we put this first album out, and we made enough money for the van and another LP, and I wanted to do another one, because the band was evolving so quickly that I wanted to document it, plus keep our momentum going.

So initially, it was just a vanity label for my band. The second album, we actually did two pressings, about 1000 copies each, then we put out a live third album. I wanted to put out a live thing so people could really tell what we sounded like. Anyway, we'd amassed this database of reviewers and jazz writers, and at that point, the vocalist Suzanne Cloud asked to be on our label, and I hadn't even been thinking of it as a label, it was just a way to put Reverie stuff out. So she did an album called I Like It and she started spreading the word amongst the Philly jazz community. Pretty soon pianist Mark Kramer, Father John D'Amico, flautist Leslie Burrs, and vocalist Evelyn Simms, they all wanted to do things, so I thought "Wow, this is a label."

Meanwhile, we were still shopping our masters around, and I was learning more and more about the music business by the worse and worse deals that we were being offered, and still, in this do-it- yourself mode, I thought, "We have to treat everybody else the same way we want to be treated." So we came up with, I don't know if you'd call it a business model, but we didn't require that we own the masters. The artist still kept their masters, we didn't ask for any publishing split or money from sales at gigs, just a percentage of sales directly through the label, and that just paid the expenses. We wanted to treat everyone the same way the band wanted to be treated by these legitimate labels. It's kind of democratic and idealistic when you think about it—music by the musicians, for musicians, of musicians. In 2006-2008 it was hard with the digital thing, but even big labels were taking hits, the deals were getting even more predatory, and that affected us too, so now it's on life support again.

AAJ: Was it a strictly Philadelphia jazz label by choice?

JM: I wanted it to be regional. I was tired of looking at magazines when Philadelphia was rarely mentioned as a jazz city. But to me, being from Indianapolis, Philly seemed like a Mecca. For instance, on the radio you could find smooth jazz late night on the weekends in Indy, but when I came here the first time, I turned on the radio, and it was John Coltrane weekend, 72 straight hours of John Coltrane. I told the guys that night, I'm moving here, it seemed like a mecca to me.

AAJ: How do you find Dreambox Media artists?

JM: Primarily they came to us. Because of me being a working musician, and Suzanne Cloud constantly talking it up, lots of people knew me, and knew about the label, so all of a sudden, we got [several prominent Philadelphia jazz musicians], and all of these people wanted to be on the label. I didn't have to reach out to them, and the label gave opportunities for the projects I was working on. With Suzanne's first very political CD, and with word of mouth between musicians, as opposed to what the legitimate labels were doing, they [Dreambox Media artists] knew that if there was any money being made, they would see it.

AAJ: How does Dreambox Media compare to more traditional labels?

JM: We're like a middle man, this is completely not on the map. I just wanted to treat artists the way we wanted to be treated when we tried to get deals, and I think everyone on the label can relate to that. Sometimes they [traditional label] didn't even want half the publishing, they wanted all of it, they wanted to own your tunes. We just took that part of it, like we [Reverie] did with them, we took them a finished master, and then the label was supposed to come up with the artwork, but all of the recording time and all the musicians had been paid at that point. So I took that and ran with it to the point where I could say we don't want your publishing and we don't want the ownership of your masters. It's not a great business plan if you were in this to make money, but I just wanted to create a format where people could get their stuff out there.

AAJ: Is there a particular conception of jazz Dreambox Media artists might conform to?

JM: No smooth jazz, that was the one self-imposed rule. The stuff had to be improvisational and not background music. It can be anything from young folks who've dedicated themselves to this music already who just need a calling card to old heads who never got any respect or a chance to put anything out, plus the people I mentioned earlier who just wanted to be something original, to be what they want, instead of having some committee of non-musician sales experts dictating what they should play. That's pretty much the point, so we've got everything from really authentic traditional stuff, and then we've got avant-garde stuff, to solo piano CDs, duos, and big bands.

As a drummer, the only other thing for me was no drum machines, I wanted real human beings playing their instruments, interacting in real time. It had to sound live even if it was a studio recording, it had to sound like they really meant it. The only exception to that was Jef Lee Johnson, who would put out these one-man band projects, but he was actually playing everything, he was just overdubbing. I got some flak from that, but he's a genius, he was a genius, and I don't use that term lightly. He was the one exception, and the drum parts were so weird that no one could play them anyway, so it didn't bother me, because he was so brilliant.

AAJ: How does your role as a performing artist impact the label?

JM: Even if it's a studio recording, I want it to sound like they're playing together. I want to hear that they were actually communicating. If it sounds like you just phoned this in, or weren't listening to the other people, it's got to sound like a conversation or something. To me, that's what makes it human, other than that, it's just a bunch of notes.

AAJ: How does a local jazz label impact the Philadelphia scene?

JM: The label gave musicians an opportunity to put out something that wouldn't appear to be just a vanity project, and there is some validity in that. But, I'm always telling people, especially now, people who want to put out CDs, I'm saying, , "This is the most expensive business card you're ever going to have," and it is, even Miles Davis said it, that a recording is just an invitation to come see the band live.

One of the things that makes it unique here, and I've talked to a lot of people who agree, especially Mike Boone, the closeness of the Philly jazz scene, the musicians, and the dedicated fans, it's like a family. Of course, it's somewhat dysfunctional sometimes, but again, what family isn't?

But to be perfectly honest, I was always hoping for more community support, WRTI had always been supportive of course, and the distributor, North Country, but they got out of the physical CD thing right around the holidays last year. But there have been a couple of times when I thought we'd see a little bump from the public at large, and it just didn't happen, I'm talking about a label profile thing in