Ray Mantilla was born in 1934 in the rhythm rich, dance-crazed atmosphere of the South Bronx where Afro-Cuban rhythmic forms transmogrified with jazz harmonies and sensibilities in the streets, the homes and dance halls. By 21, Mantilla was on the bandstand playing conga drums along with contemporaries Eddie Palmieri and Ray Barretto, playing that unique Neo-Nuyorican synthesis known as 'salsa' With flutist Herbie Mann, Ray Mantilla entered the international spotlight in 1960. Then, Max Roach invited him to be part of the classic "Freedom Now Suite" recording. After a stint in Puerto Rico where he honed his skills on the trap set, Ray returned to the States to find himself touring nationally and in Europe and Japan with Art Blakey and the Jazz Messengers 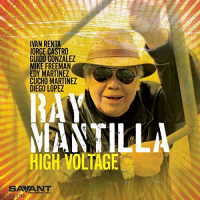 A week or so ago I received a call from Harry Sepulveda. Harry and I go way back. We first met in the 1970s, when I used to buy Latin-jazz albums at Record Mart, his store in the Times Square subway station, down a flight of stairs from the Shuttle. Today the store still exists, though ...