Home » Jazz Articles » In Memoriam: Jazz Musicians Who Passed in 2020 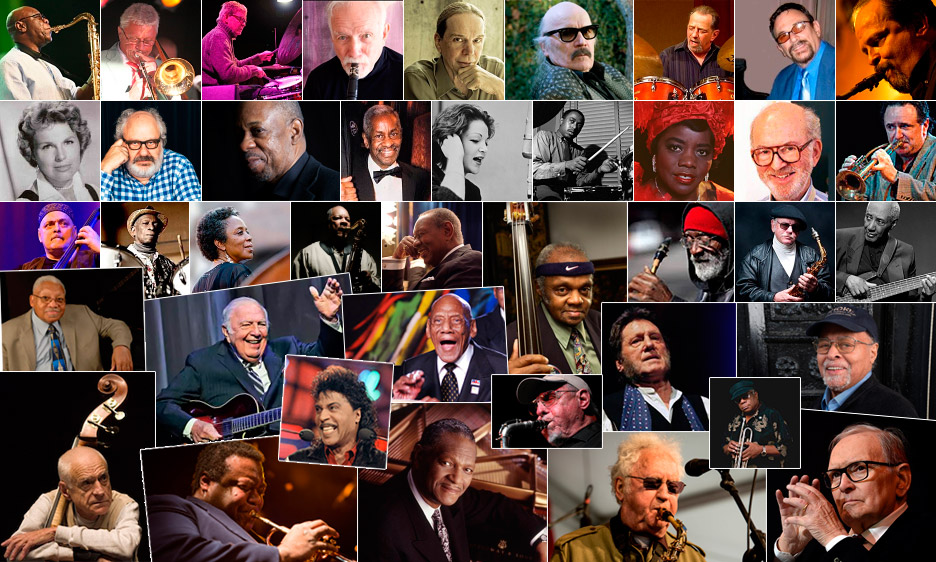 By Maxim Micheliov
December 31, 2020
Sign in to view read count
As 2020 comes to a close, we wanted to take a moment to remember the extraordinarily gifted musicians who made an indelible mark on jazz. With sadness, we bid farewell to Gary Peacock, Ennio Morricone, Keith Tippett, Henry Grimes, Bucky Pizzarelli, Wallace Roney and many others including NEA Jazz Masters Jimmy Cobb, Lee Konitz, Candido Camero, McCoy Tyner, and Jimmy Heath.

Wolfgang Dauner was a German jazz fusion pianist who worked in the United Jazz and Rock Ensemble and with Hans Koller, Albert Mangelsdorff, Volker Kriegel and Ack van Rooyen. He was the father of German drummer Florian Dauner, a member of the German hip-hop group Die Fantastischen Vier.

This Brazilian composer/arranger and trumpet artist has fourteen critically acclaimed albums, a Grammy nomination, and a busy international touring schedule that includes the most prestigious jazz festivals in the world.

Jimmy Heath has long been recognized as a brilliant instrumentalist and a magnificent composer and arranger. During his career, Jimmy Heath has performed on more than 100 record albums including twelve as a leader. Jimmy has also written more than 125 compositions, many of which have become jazz standards and have been recorded by other artists including Art Farmer, Cannonball Adderley, Clark Terry, Chet Baker, Miles Davis, James Moody, Milt Jackson, Ahmad Jamal, Ray Charles, Dizzy Gillespie J.J Johnson and Dexter Gordon.

Gullotti was the drummer for the Fringe, an innovative free-jazz trio that he cofounded in 1972. The Fringe quickly became a seminal act on the Boston scene, with longstanding residencies across several clubs and other venues.

Anyone who has seen the Pat Metheny Group in concert knows how the brilliant keyboard artistry of Lyle Mays is integral to their sound. While Mays has made his mark in the jazz idiom, he counts Bartok, Stravinsky, Berg, and Ravel among his musical inspirations.

In the late 1960s, Christensen played alongside Jan Garbarek on several recordings by the composer George Russell.Christensen was a member of the Keith Jarrett "European Quartet" of the 1970s, along with Jan Garbarek and Palle Danielsson, which produced five jazz recordings on ECM Records.

William Overton Smith was an American clarinetist and composer. He worked extensively in modern classical music, Third Stream and jazz, and was perhaps best known for having played with pianist Dave Brubeck intermittently from the 1940s to the early 2000s.

It is not an overstatement to say that modern jazz has been shaped by the music of McCoy Tyner. His blues-based piano style, replete with sophisticated chords and an explosively percussive left hand has transcended conventional styles to become one of the most identifiable sounds in improvised music. His harmonic contributions and dramatic rhythmic devices form the vocabulary of a majority of jazz pianists.

Marcelo Peralta, born in Buenos Aires, developed a personal view of improvised music when he formed his own quintet, with which he explored the roots of Latin American music.

Mike Longo is best-known as a reliable and versatile player who was the pianist with Dizzy Gillespie during 1966-1973. He has 19 albums to his credit (three of them with his big band, the New York State of the Art Jazz Ensemble).

The most widely known musician from the African nation of Cameroon, Manu Dibango was one of the pioneers of world music in the early 1970s and remained one of the most internationally celebrated African musicians into the mid-1990s.

Bert Olav Holmquist was a Swedish trombonist who was active in the European music scene since the 1960s.

Adept on several reed instruments, Pat Longo concentrated on alto saxophone and clarinet. In 1979, he achieved his goal and formed a big band which quickly gained regular bookings in and around LA. In the late '70s and early '80s Longo's Super Big Band successfully blended the more traditional aspects of big band music with currently popular jazz rock funkiness.

Ray Mantilla was born in 1934 in the rhythm rich, dance-crazed atmosphere of the South Bronx where Afro-Cuban rhythmic forms transmogrified with jazz harmonies and sensibilities in the streets, the homes and dance halls.

New York born bassist Alex Layne began his musical career in 1959 at Count Basie's Night Club. He went on to become a major player on the New York scene, where Alex performed with many great musicians.

Wallace Roney was an American jazz trumpeter. Roney took lessons from Clark Terry and Dizzy Gillespie and studied with Miles Davis from 1985 until the latter's death in 1991. Roney has been documented on over 250 audio recordings.

Ellis Louis Marsalis Jr. was an American jazz pianist and educator. Active since the late 1940s, Marsalis came to greater attention in the 1980s and 1990s as the patriarch of the musical Marsalis family, when sons Branford and Wynton became popular musicians.

For more than six decades, the legendary Bucky Pizzarelli has had a stellar career. "The complete jazz musician," he was a fixture in jazz and the studios since the early '50s. The list of big bands and vocalists with whom Bucky has performed and recorded reads like a veritable Who's Who of Jazz.

Onaje Allan Gumbs is one of the industry's most respected and talented musical collaborators. He has worked for more than 30 years with an illustrious list of jazz, R&B and pop artists.

Betty Bennett was an American jazz and big band singer. Bennett was born in October 1921. Her first major signing was with the Claude Thornhill band in 1946, the band in which her husband, bassist Iggy Shevak, was playing.

Andy González was a New York City-based double bassist. González was a respected and prolific jazz, Latin-jazz and salsa musician, composer and arranger of Puerto Rican ancestry. He was a long-time musical collaborator with brother Jerry González.

Jymie Merritt was an American jazz double-bassist, electric-bass pioneer, bandleader and composer. Merritt was a member of Art Blakey's Jazz Messengers group from 1957 until 1962.

Konitz is sometimes regarded as the preeminent cool jazz saxophonist, because he performed and recorded with Claude Thornhill, Lennie Tristano, and with Miles Davis on his epochal Birth of the Cool, which gave the form its name.

Master jazz musician (acoustic bass, violin, poetry) Henry Grimes has played more than 600 concerts in 30 countries (including many festivals) since 2OO3, when he made his astonishing return to the music world after 35 years away.

Logan leaves behind a small body of recorded work, but his standing in the improvised avant-garde is considerable. He emerged just as free jazz was beginning to crest as a movement, and even amidst a crowded field of iconoclasts, he distinguished himself as an original.

Tony Oladipo Allen was a Nigerian drummer, composer, and songwriter who lived and worked in Paris, France. Allen was the drummer and musical director of Fela Kuti's band Africa '70 from 1968 to 1979, and was one of the primary co-founders of the genre of Afrobeat music.

Cole has recorded over 50 albums and CD's, his newest, Back On Top, is on Jazz Excursion Records and is the first record made specifically for jazz internet radio.

One of the original rock & roll greats, Little Richard merged the fire of gospel with New Orleans R&B, pounding the piano and wailing with gleeful abandon. While numerous other R&B greats of the early '50s had been moving in a similar direction, none of them matched the sheer electricity of Richard's vocals.

Melva Houston Tucker was an American soul and jazz singer. In the 1980s she toured Europe with the Platters.

Legendary jazz drummer, Jimmy Cobb, was born in Washington, D.C. on January 20, 1929. A superb, mostly self-taught musician, Jimmy is the elder statesman of all of the incredible Miles Davis bands.

For over thirty years Keith Tippett has been at the forefront of contemporary European jazz and new music. In the late 1960s, Tippett led a sextet featuring Elton Dean on saxophone, Mark Charig on trumpet and Nick Evans on trombone. Tippett married singer Julie Driscoll and wrote scores for TV.

Lionel Frederick Cole was an American jazz singer and pianist whose recording career spanned almost 70 years. He was the brother of musicians Nat King Cole, Eddie Cole, and Ike Cole.

Ennio Morricone was born in Rome. His long artistic career includes a wide range of composition genres, from absolute concert music to applied music, working as orchestrator, conductor and composer for theatre, radio and cinema.

Edward Gale Stevens Jr., known professionally as Eddie Gale, was an American trumpeter known for his work in free jazz, especially with the Sun Ra Arkestra.

Salome Bey CM was an American-born Canadian singer-songwriter, composer, and actress who lived in Toronto, Ontario, since 1966. In 2005, she was made an honorary Member of the Order of Canada.

An excellent drummer both in big bands and combos, Charli Persip changed his name from Charlie in the early '80s. He had early experience playing locally in New Jersey and with Tadd Dameron (1953), but gained his initial recognition for his work with Dizzy Gillespie's big band and quintet (1953-1958).

Gary Peacock was an American jazz double bassist. He recorded a dozen albums under his own name, and also performed and recorded with major jazz figures such as Albert Ayler, Paul Bley, and Bill Evans.

Ira Sullivan was an American jazz trumpeter, flugelhornist, flautist, saxophonist, and composer born in Washington, D.C., United States. An active musician since the 1950s, he worked often with Red Rodney and Lin Halliday.

Cándido Camero Guerra, known simply as Cándido, was a Cuban conga and bongo player. He is considered a pioneer of Afro-Cuban jazz and an innovator in conga drumming.

North-American jazz pianist, composer and educator Frank Kimbrough was born November 2, 1956 in Roxboro, North Carolina and has been playing piano since before he can remember, and received influential piano instruction from an early age. His foundation in classical music studies grounded him in strong technique and profoundly influenced his open musical tastes.

Eugene Wright, was an American jazz bassist, best known for his work as a member of The Dave Brubeck Quartet, in particular on the group's most famous album Time Out (1959), with pianist Brubeck, drummer Joe Morello and saxophonist Paul Desmond.