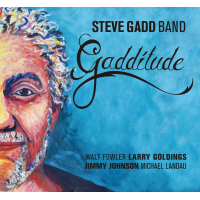 Drummer Steve Gadd, the man responsible for some of the most memorable grooves and explosive drum solos on record, is often looked at as a perpetual sideman and session giant. Over the past four decades he's laid down the rhythmic law for everybody from Steely Dan to James Taylor and Chick Corea to Paul Simon, but he's been making more time for himself of late; in a three year span, he's managed to deliver four albums that highlight his versatility and supreme musicality: The hard grooving Live At Voce (BFM Jazz, 2010), billed to "Steve Gadd And Friends," a pair of albums from The Gaddabouts, a roots-y outfit which puts Gadd behind vocalist Edie Brickell and some studio heavyweights, and this earthy instrumental session.

Gadditude finds the man of the hour fronting/backing a band that's been backing Taylor for years. Together, without Taylor, they deliver a program that's alternately about fun, feel and depth. Gadd's partners on this journey—bassist Jimmy Johnson, trumpeter Walt Fowler, guitarist Michael Landau and keyboardist Larry Goldings—are all supremely gifted players with shared musical values, making them ideally suited for this project. They all know how to simply throw it down and have a good time ("The Windup"), but they're also capable of extreme sensitivity when the music calls for different-and-precise aural coloring ("Scatterbrain").

Gadditude moves from spacy to grounded and airy to dense as the members of the Steve Gadd Band demonstrates why they're the first call guys for so many other musicians. As the album takes flight, the light textured fusion of Landau's "Africa" leads to the mellow and intriguing "Ask Me Now." Things become more reflective when Gadd and company explore Keith Jarrett's "Country," recast in three here, but that mood doesn't linger; Goldings' "Cavaliero," which comes next, has a bit more bite, thanks in large part to Landau's guitar work. As the album continues, Gadd and his companions tackle the blues ("Green Foam"), add a dash of old school American soul to pianist Abdullah Ibrahim's music ("The Mountain"), and have a party on their return visit to Jarrett territory ("The Windup").

Gadd doesn't deliver any chops-heavy solos or eye-popping fills here, but he does what he does best: create grooves and rhythmic foundations that support the music and accentuate the core concepts of each song.