After receiving his Master's Degree from The University of Miami, Denis DiBlasio joined the big band of legendary trumpeter Maynard Ferguson, serving as Maynard’s Musical Director for five years. During this time he honed his virtuosity on the baritone saxophone and flute as well as a prodigious scat-vocal technique, and developed estimable composing / arranging skills. His scores have been published by Kendor, William Allen, Kjos, Doug Beach, Hal Leonard. Houston, Jamey Aebersold and Roncorp Publications. He is currently Director of the Jazz Program at Rowan University, conducts Rowan’s Lab Band and holds the seat as the Executive Director of The Maynard Ferguson Institute of Jazz Studies at Rowan. As a clinician for the Yamaha Musical Corporation, DiBlasio has taught, performed and conducted all over the United States; his“education as entertainment”style has also taken him to Canada, Mexico, Spain, France, Italy, Switzerland, Denmark, Japan and Thailand

This article first appeared in Jersey Jazz Magazine. The names of the judges in the Gerry & Franca Mulligan Foundation's Gerry's Jazz Challenge competition among high school music students were kept anonymous. The results, though, were anything but mysterious. The contestants were judged on five categories: notes, sound, technique, intonation, and presentation. ...

Jazz Bridge and Friends of Hawthorne Park present baritone saxophonist, flutist and scat singer Denis DiBlasio and tenor saxophone legend Larry McKenna for a free concert on Thursday, June 19th. This is the second in a four-concert Jazz in Hawthorne Park series, each featuring our area’s finest jazz artists. Hawthorne Park is at 12th and Catherine ...

Baritone saxophonist Denis DiBlasio kicks off the Jazz Bridge Neighborhood Concert Series in Collingswood, NJ, at the Collingswood Community Center, 30 East Collings Ave, on Thursday, October 3rd. One show at 7:30 pm. $10/$5 students (no advance sales). For info: 856-858-8914 or 215-517-8337, or visit Jazz Bridge. Denis DiBlasio—who will be accompanied at this performance by ...

Jazz Bridge, the region’s non-profit dedicated to assisting Jazz and blues musicians in need, has announced its stellar Neighborhood Concert Series for 2013-2014. With nearly 40 concerts on five area stages with some 200 singers and instrumentalists covering virtually every jazz genre, this year’s Jazz Bridge Neighborhood Concert Series, which runs from October through May, promises ... 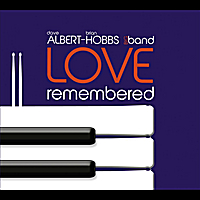 Dave Albert--Brian Hobbs Big Band Love Remembered Eidolon Records 2012 What a bold and unusual idea, opening a big-band album with a waltz performed by a trio. The Albert-Hobbs Big Band does exactly that with “For Mr. C," one of several dedications on its debut recording, Love ...

Pianist Jim Ridl and trumpeter Terrell Stafford are Philadelphia jazz musicians and recording artists who continue to receive worldwide acclaim for their artistry, versatility, creativity, and contributions to improvisational music. Jazz Bridge, the Philadelphia-based non-profit organization dedicated to assisting area jazz and blues musicians in need, is presenting these astounding artists in concert on October 18th ...