BY RUSS MUSTO
December 1, 2008
Sign in to view read count

I listened to everything walking with a trombone, from Tommy Dorsey on ... I listened to the instrument. Everybody that played it

The most recorded jazz trombonist of his lifetime, Curtis Fuller's illustrious career spans six decades and includes tenures with many of the greatest names in this music. Born Dec. 15th, 1934 in Detroit, Fuller was orphaned at an early age, but found family in the close-knit jazz community of the musically fertile Motor City. He first picked up the trombone in the school band at Cass Tech High School, where his fellow students included Donald Byrd and Paul Chambers and the list of graduates reads like a Who's Who of jazz.

Fuller downplays his early musical abilities evidenced at Cass: "I was trying to play. I wasn't in the band, the A band, I was in like the D band." Nevertheless it was there that he developed his love for his instrument. "There was a young guy that came up with Donald Byrd, his name was Claude Black," he recalls. "He came to the high school and played with some gentlemen, Roland Hanna... Gene Taylor was the bassist. That's the very first time, first guy I fell in love with. He didn't play anything like JJ. He played like himself."

But it was JJ Johnson who eventually became Fuller's greatest influence, providing the blueprint for him to develop his playing. "I heard JJ on the recording with Charlie Parker, 'Quasimodo' [hums the melody] and then I saw him later... I was in the orphanage—I saw him coming out there playing with Illinois Jacquet," he says. Fuller became an earlier progenitor of the Johnson-based bebop trombone style, but quickly developed his own unique voice. "I was told coming up by Miles and everybody, 'Get off of JJ. Don't play his shit. Play your own shit.'" Fuller's influences go well beyond Johnson. In addition to hearing Frank Rosolino and Kiane Zawadi, the two most prominent trombonists on the Detroit scene during his youth, he checked out the instrument's history. "I listened to everything walking with a trombone, from Tommy Dorsey on," he says proudly. "I know guys you never heard of—Fred Mergy, Tommy Turk, Trummy Young—I listened to the instrument. Everybody that played it, I listened to."

Miles was just one of the many jazz greats that Fuller worked with when he began his professional career in Detroit, which he admits did not really start until he returned home after a stint in the Army (where he played with Cannonball Adderley's dance band) and entered Wayne State University (where his roommate was saxophonist Joe Henderson). "Before that I mean, it wasn't what you would call working... I mean it was sittin' in. Most of that came as a little guy trying to sit in with Thad [Jones] and Billy Mitchell...just trying to sit in, sittin' in with people. I wasn't really working with anybody... I worked with lesser-known guys. Most of the guys would be more identified with Motown." When the trombonist did begin working, things took off rapidly. "The first was Kenny Burrell, he gave me my first job...at Klein's Showbox in 1955...he had Pepper Adams in the band, Tommy Flanagan," Fuller remembers.

"After Kenny left... to go with Oscar Peterson... Pepper Adams and I started the Bone and baritone band," Fuller says. The band gained some notoriety playing on Soupy Sales' television show. "He was very good to jazz—that brought the Bone and baritone to prominence. We used to play all Thad Jones shit. Pepper Adams...he literally made me play all that old hard shit."

Yusef Lateef was Fuller's next employer. While working with Lateef the trombonist left Detroit, headed to Boston to make his first recording, Jazz In Transition, with Adams and John Coltrane and then came to New York to record with Lateef for Prestige. While there he made it down to Birdland to sit in with Miles. After the gig Davis went across the street to the Alvin Hotel where Fuller was staying with Lateef and told him, "Look, I want you to join the band." Fuller said, "Well I have to ask Yusef because I'm working with him," to which Miles replied, "Well there he is, ask him." Lateef agreed, asking for two weeks notice, but unfortunately health problems forced Davis to disband a couple of weeks later.

While Davis was in the hospital, Fuller worked with fellow band member John Coltrane at Birdland and then in Philadelphia with Lee Morgan, later recording the legendary Blue Train album with the two. Upon returning to New York he was offered the job of filling in for Monk at the Five Spot while the pianist waited for his cabaret card. The trombonist put together a group with tenor saxophonist Benny Golson. "It was supposed be for two months for Monk to get his police card and we stayed two years, damn near," he laughs. Working opposite the group was the Gerry Mulligan Quartet with Art Farmer. Fuller recorded prolifically throughout the rest of the decade with Golson and as a leader and sideman on his own. Farmer and Golson would later join forces to form the Jazztet and Fuller would be an important component of the band (which also featured a young McCoy Tyner), but would leave because of the lack of opportunities to perform his own music with the group.

There were also stints with Dizzy Gillespie, Lester Young, James Moody and Quincy Jones, but it was with Art Blakey and the Jazz Messengers that Fuller would reach the pinnacle of his career. "I ran into him all the time. He was always there checking, because Lee Morgan had put the bug in his ear," he recalls with obvious pride. "Miles, everybody had told him, JJ, everybody ...He just came to me one night, 'I want you in the band...You got any music? Tell me you write. Write a song, we're going into the studio next week." Fuller joined the group in June of 1961 and appeared on the Impulse Art Blakey!!!!! Jazz Messengers!!!!! record with Lee Morgan, Wayne Shorter, Bobby Timmons and Jymie Merritt, contributing the first of several classic compositions, "A la Mode," to the band's book. "Art gave me the chance; that was Art."

Fuller left the next day for a State Department tour. Blakey, in a rare example of leadership latitude, gave Fuller a short leave of absence, but when the trombonist tried to make the Russian leg of the excursion the drummer told him, "Well if you go, goddammit, don't come back here. You want to play with them motherfuckers, go!" Fuller wisely chose to rejoin the group, which would soon feature Freddie Hubbard, Cedar Walton and Reggie Workman, going on to become one of the greatest, most celebrated bands in jazz history. The trombonist would be the last man to leave in 1965 and would frequently rejoin the group in the '70s for European tours and allstar reunions.

In the ensuing years he would lend his huge talents to many great groups, including tenures with Jimmy Heath and Count Basie. In the '80s he toured extensively with the Timeless All Stars (featuring old band mate Cedar Walton, along with Harold Land, Bobby Hutcherson, Buster Williams and Billy Higgins) of which he says, "That was beautiful, that was my next best thing." At the same time he worked with the Paris Reunion Band and co-led a band, Giant Bones, with Kai Winding. After moving to Massachusetts in the late '80s he began teaching at Hartt College and the New England Conservatory. Serious health problems threatened his career in 1994, but through hard work he managed to regain his considerable abilities and continue his contributions to the music. 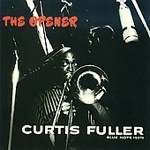 While he is still going strong, Fuller's legacy as one of the most influential trombonists in the history of jazz is already well established. "He's definitely one of the biggest influences on me," says Robin Eubanks, a fellow Jazz Messenger. "He has a lot of technique for sure; he plays fast... for trombone you're always wondering how cats can do that since it's usually seen as a limited instrument in terms of velocity and intensity... He was one of the people that proved you can get around the horn well and because he was on so many recordings he was one of the people that put the sound of the trombone in people's ears, in terms of people putting a band together what kind of instrumentation they're going to use."

Steve Turre, another former Messenger, remembers, "I met Curtis when I first came to New York with Art Blakey and the Jazz Messengers. Opening night he was there and he was very encouraging... We ended up becoming friends and he showed me a lot of little keys that opened the door in ways to flow on the horn. I don't know anyone who can swing the way that Curtis swings. His phrasing and rhythmic concept is the ultimate."

Steve Davis, the final trombonist in the Messenger lineage concurs. "From a trombonistic standpoint, just the sheer velocity with which he phrases is pretty much unparalleled by anybody. The way he combines technical acumen on the instrument with his natural feeling for the music and for improvisation is just incredible... when you hear Curtis play it's all heart and soul." 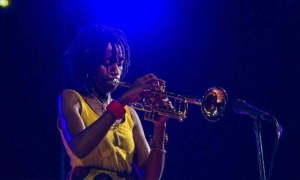