By IAN PATTERSON
December 25, 2016
Sign in to view read count 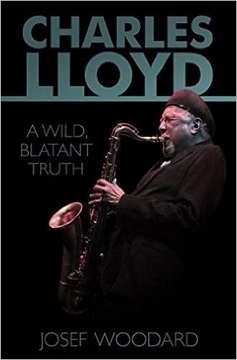 A book on Charles Lloyd—one of the most celebrated and enigmatic jazz musicians of the past fifty years—has been a long time coming. It's been a while in the making too, for author Josef Woodard spent twenty five years doing the groundwork, repeatedly interviewing Lloyd, following his career for Downbeat/JazzTimes and other publications and even traveling on tour with the saxophonist. Few writers have enjoyed such sustained access to Lloyd or earned his trust to such an extent, and the result is a fascinating portrait of a singular figure.

Part biography, large part first person testimony, the picture that emerges of Lloyd is a complex mosaic: a musician nurtured by the love of music yet ill at ease with the business surrounding it; a man whose love of nature/meditative reclusion seems at odds with the demands of constantly touring the world; a man guided by spiritual concerns yet with an abiding interest in real estate.

Of course, no personality can be captured by such facile reductions, least of all Lloyd, who was that rarest of beasts while still in his twenties -a million-selling jazz artist. At the height of his 1960s success, Lloyd was seen by many as some kind of shamanistic guru, yet with the world at his feet Lloyd famously turned his back on jazz and the music industry for over a decade. His return to the stage in the 1980s has been well documented on record, in film and in the jazz media, but not until now has Lloyd's personal story—his inner cogs—been so thoroughly subjected to analysis within such a career-spanning narrative.

Raised in the racially conflictive Memphis of the 1930s in a family of mixed races, and with a mother largely absent from his life, Lloyd's early emotional topography seems to have sculpted his choices ever since. This part of the book is particularly revealing, for despite his challenging surroundings and personal circumstances, Lloyd was, by his own account, destined for a career in music. Enchanted by the music he heard on the radio as a kid, Lloyd wanted a saxophone from a very early age. "It took me until I was nine years old to convince my parents to get me one," he tells Woodard.

Remarkably, Lloyd was playing clubs across Memphis nightly from nine pm to four am, before he was ten years old, in a world, as he puts it, of gambling, gunshots and cotton warehouses by the Mississippi docks. "I was pretty much playing every night of my life and shedding every day."

Lloyd's grounding in the blues, R&B and rock 'n' roll of the day, playing in the bands of Johnny Ace, B.B. King, Bobby Blue Bland and Rosco Gordon has been well documented in most interviews Lloyd has ever granted, but that's hardly surprising as so much of Lloyd's sound emanates from those formative years. On playing with Howlin' Wolf Lloyd states: "I have never had an experience where a musician could shake the building to its foundation like Wolf used to do."

A Wild Blatant Truth is also about Lloyd's sound; the tenderness, the keening spirituality and the wilder flights are just the songs of his soul: "I wanted to be a singer but I didn't have the voice. That's why I had to get a horn. That's what I'm trying to do on the horn—trying to sing."

Often compared by critics to John Coltrane—an influence among many others, for sure—the bebop of Charlie Parker and Dizzy Gillespie arguably had a more profound effect on Lloyd as a young man growing up in Memphis: "They were putting out all this beautiful wisdom that let us know that this kind of apartheid down there was not to be an all-time feature in our life, and we weren't going for the okeydoke."

Lloyd's love of classical music led him to study at USC, California in 1956, though jazz was his calling and an early band included Bobby Hutcherson, Scott LaFaro, and Billy Higgins, with Don Cherry stepping in at times. Lloyd jammed with Eric Dolphy, Ornette Coleman and Ellis Marsalis and he also played in Gerald Wilson's big band: "Gerald's band was like this messianic thing he had. He had beautiful arrangements. It was a Holy Grail," enthuses Lloyd.

When Dolphy left Chico Hamilton's group, Buddy Collette sent Lloyd an air ticket to travel east and fill the position in the band. "I owe everything to him," says Lloyd of Collette. After three and a half years with Hamilton and a number of classic recordings, Lloyd left to join Cannonball Adderley's group, where he was musical director.

From early on, however, Lloyd fronted his own groups. Several years before his classic, mid/late 1960s quartet, Lloyd's New York bands contained the likes of Herbie Hancock, Pete La Roca, Ron Carter, Henry Grimes, Steve Kuhn and Joe Chambers. Lloyd suggests on a couple of occasions that Miles Davis was always trying to lure him to join his band—a claim not corroborated elsewhere, [nor in Davis' autobiography], but Lloyd likely wouldn't have worked with a musican he refers to as "an interesting bunch of guys."

Lloyd sheds most light on his important quartets. Of the classic 1960s line-up of Keith Jarrett, Jack DeJohnette, Cecil McBee, Lloyd recalls the chemistry of the band and its triumphs, notably the huge commercial success of Forest Flower: Charles Lloyd at Monterey (Atlantic, 1966), which would sell over a million copies. The saxophonist's claim that the band wasn't making any real money may well be true, given the rapacious nature of record companies in those days, but it's a statement that doesn't quite tally with Lloyd's own description of putting a Ferrari on a plane so he could drive it up and down the coast.

Regardless, the success of Forest Flower... meant that the corporate vultures were soon swarming overhead: ..."they were trying to take my music into arenas," recalls Lloyd, who also recoiled from clubs with their alcohol- fuelled patrons. But success came at a price: "I had lots of excess," Lloyd confides to Woodard. "Life on the road, life in the fast lane, had become unsavoury. I was suffering inside and out. The music was suffering."

Drugs, adulation, manipulation and money come across as the four Horsemen of the Apocalypse that would drive Lloyd to all but abandon public performance and seek reclusion, although the emotional dislocation at the death of his mother and of his childhood friend Booker Little may also have spurred the decision.

Lloyd had certainly become disenchanted with the music business and retreated to Big Sur, California, where he delved deeply into transcendental meditation for the next decade, surfacing only occasionally to record infrequent and fairly esoteric albums -music, Lloyd admits, that wasn't always of great value. Notably, Lloyd collaborated on record and on stage with The Beach Boys. Although his dealings with the business savvy Beach Boy Mike Love—and his relationship with the band—come across as ambiguous to say the least: "Hearing that some Beach Boy wants to talk to you, it's machete time," Lloyd tells the author. "Those guys put a surfboard on Chuck Berry and the Four Freshmen."

If Lloyd's retreat from the music business in the 1970s was to reconstitute himself spiritually through a simpler life, it seems to have worked. "Those years of solitude were prayerful for me," Lloyd recalls. "Since I wasn't doing any music, I had to take those years to try to change my character. I knew if I could do that, it would affect the music, without question. You are what you eat."

Spiritually well-fed, Lloyd was persuaded out of his effective retirement in 1983 by Michel Petrucciani. Once that collaboration had run its course Lloyd's goal was clear: "I tried to go back to Big Sur and do what I was doing and resume my spiritual life, but I had been bitten by the Cobra by then."

The Cobra's bite—the lure of the road and the resumption of Lloyd's recording career—would see Lloyd sign for Manfred Eicher's ECM label in the late 1980s, where he would go on to record some fifteen albums to critical acclaim. Lloyd is fulsome in his praise of Eicher as a person, his telling contribution in the studio and the artistic carte blanche the ECM head honcho extended to Lloyd.

Some of Lloyd's most beguiling works have been his diversions from the quartet format, particularly Sangam (ECM, 2006) with Zakir Hussain and Eric Harland, Athens Concert (ECM, 2011) with Greek classical singer Maria Farantouri, and the duo albums, Which Way is East (ECM, 2004) with Billy Higgins, and Hagar's Song (ECM, 2013) with Jason Moran—practically all Lloyd's recordings are covered in some depth by both Lloyd and Woodard.

Lloyd speaks at length with the author about his relationship with the key musical personalities during the ECM years -Hussain, Harland, John Abercrombie, Bobo Stenson, Moran, and above all Higgins. Likewise, many of the musicians who have worked with Lloyd over the years heap due praise on the man and his art.

In the end, what comes across in these pages, more so than any of Lloyd's often circuitous musings on spirituality, or the key events and personalities in his life, is his deep devotion to the music. "I'm still drunk with the love of the music," Lloyd told Woodard in a 2010 interview. "I approach the bandstand with the beginner's mind each night, and hope that I will be met along the way. I hoist my sails to make ready for the winds of grace."