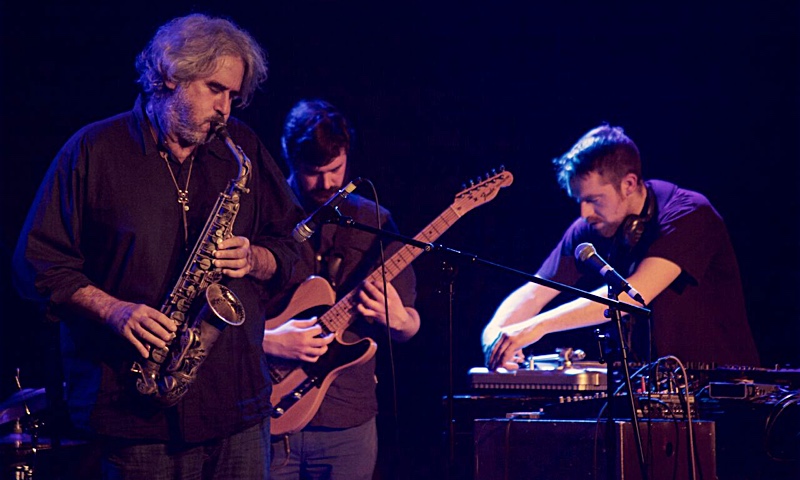 What it has will surely last but is that jazz? —Gil-Scott Heron

Another Brilliant Corners, a few more brilliant corners. Belfast's fledgling international jazz festival may only be in its fourth year but already it feels like an established part of the city's vibrant cultural landscape, a date in the calendar to look forward to, rather than an event that takes people by surprise.

The original three-day festival has grown steadily year on year and the 2016 edition spanned a meaty eight days, reaching into new corners of Belfast, the storied city that built The Titanic. In addition to the festival's traditional venues, bean bags and a barge made for quirky new environments for the record numbers that turned out to enjoy jazz in all its colors.

Film Documentaries in The Bean Bag

This year Brilliant Corners paid homage to the late, great Ornette Coleman with a film documentary and a tribute concert. In fact, the first three days of this year's festival saw a trio of documentary films throw light on Coleman, Gil Scott-Heron and Jaco Pastorius. The venue was the Bean Bag, a cosy art-house cinema tucked away in an alley of the Cathedral Quarter, where bean bags suck you into a comfort zone that induces attentive viewing, or snoozing, depending on the individual.

The pick of the films was arguably Black Wax, Robert Mugge's 1982 portrayal of Gil-Scott Heron -self-confessed bluesologist, jazz poet and soul singer. Concert footage interspersed with Heron's scripted monologue provided a potent reminder of Heron's captivating live performances and of a socio-political commentator—devoid of all posturing—whose sharp wit and facility with language has rarely been matched in urban protest song to this day. Albums such as Small Talk at 125th and Lennox (1970), Pieces of a Man (1971) and Free Will (1972)—all on Flying Dutchman Records—remain classics that have influenced successive waves of hip-hop, rap and neo-soul artists.

Paul Marchand's Jaco: Jaco Pastorius is a warts-and-all portrayal of the influential fretless bassist best known for his years in Weather Report and for his collaborations with Joni Mitchell and Pat Metheny. There are perhaps rather too many superficial interviews with musicians who collaborated with or who were inspired by Pastorius, but the biopic succeeds in capturing both the musical power and the mental fragility of arguably the most influential of all electric bassists, who died aged just thirty five, following an altercation with a bouncer in a bar.

Independent film-maker Shirley Clarke's Ornette: Made in America (1984) explores the music and philosophy of the ever-influential Ornette Coleman. Fragmentary, non-linear and more than a little dated at times, insightful interviews with the subject and snapshots of his musical trajectory in New York, Nigeria, Morocco, and with the Fort Worth Symphony Orchestra, are intercut with low-budget fantasy sequences that add little if anything to the narrative. The definitive biopic of this giant of modern music remains to be delivered.

The inclusion of jazz-related films in Brilliant Corners 2016 was a welcome addition to the program and hopefully sets a precedent for future editions. With jazz still to a large degree beholden/shackled (delete to taste) to its past, a showing of Icons Among Us: Jazz In The Present Tense (2009) might be a timely reminder of the depth of living, breathing jazz talent that operates today; it would certainly be in keeping with Brilliant Corner's progressive outlook and commitment to youth development.

More satisfying by way of a tribute to Coleman, however, was the opening concert of Brilliant Corners in the Black Box, which featured Tony Kofi, Byron Wallen, Rod Youngs and Alan Niblock. Former member of the Jazz Warriors, multi-instrumentalist Kofi is a dedicated student of Coleman's music; he leads his own Colman tribute band, the Sphinx Trio and recorded with Coleman on Jamaaladeen Tacuma's For The Love of Ornette (Jazzwerkstatt, 2010), one of Coleman's final recorded ventures.

An unapologetically nostalgic set paid homage to Coleman's ground-breaking early albums, but if the tunes were perhaps overly familiar to the cognoscenti in the Black Box audience there was no escaping the verve in the quartet's delivery or the brilliance of its virtuosity. Kofi and Wallen were mesmeric as they switched between seamless unison lines and extended individual solos on mostly up-tempo Coleman classics such as "Turnaround," "Jayne" and "Face of The Bass." "Beauty Is a Rare Thing" signalled a change in tempo and intensity, this rumbling, edgy blues casting an undeniable spell.

The quartet fire of "Humpty Dumpty" and "Blues Connotation" and "Congeniality was balanced with the soulful, New Orleans-tinged "Una Muy Bonita." The gentler side of Coleman was explored in a lyrical Niblock and Kofi duet that evoked Coleman's chemistry with the late Charlie Haden. In the main, though, the quartet roared its way through Coleman's early songbook, with Kofi and Wallen grabbing the headlines. Special mention, however, should be made of Niblock, who excelled despite playing with these musicians for the very first time.

Anyone in the audience coming to this music for the first time would likely have been impressed by the vitality of the compositions and the strong melodic and harmonic structures. At the distance of sixty years from the release of Something Else!!!! (Contemporary, 1958) it's difficult to understand the threat Coleman's music posed, in its day, to a generation of bebop acolytes, and the sometimes mocking or even abusive response he suffered. Coleman, however, chartered a very personal musical course that has arguably stood the test of time better than the highly codified language of bebop.

Growing the Next Generation of Jazz Musicians

The launch of Brilliant Corners 2016 took place back in January, when David Lyttle, Moving on Music's Musician-In-Residence at The MAC—Belfast's flagship arts centre—performed in a trio with Melaina Gillard and Neil O'Loghlen in a very curious corner of The MAC. Since then, Lyttle has been mentoring a group of local jazz musicians and they opened for VEIN Trio in The Crescent Arts Centre.

Though Lyttle was merely fulfilling one of his roles as Musician-Residence, his commitment to nurturing young jazz talent on these shores runs deep. "I'm always looking for new talent," said Lyttle, "to try and bring the new generation forward. It's great for the jazz scene in Belfast to have a group of young people who are actually really interested in the music," Lyttle expanded. "I've been working as a jazz musician for about ten years and whenever I was starting out there was really nobody who had the same kind of drive and all these guys are really passionate about the music, which is a pretty cool thing"

Afterwards, the musicians spoke of the experience playing at Brilliant Corners. "It's a great honor to play in front of an audience that are all jazz fans," said Leighton. "It's brilliant." Working with Lyttle has also clearly been inspiring. "It's been amazing working with Dave," acknowledged Kelly, "because he has so much knowledge about the genre." Hanlon concurred: "We've got a brilliant insight into this tradition that we're all very interested in."

This initiative from Moving On Music to promote up-and-coming jazz talent in Northern Ireland is to be applauded and will no doubt play an important role in growing the new generation of jazz musicians. The talent is there, but making it, as Lyttle noted, will come down to the personal levels of drive and motivation that propel these promising young musicians.

Swiss trio VEIN Trio has been around for a decade and has released nine CDs in that time, most notably Jazz Talks (Unit Records, 2014) featuring Dave Liebman, which got a four-star review from The Guardian's John Fordham. In an era when there seem to be almost as many modern piano trios as there are pianos in the world, creating a personal identity is no small challenge. The opener "Under Construction" and several tunes that followed, were characterized by pianist Florian Arbenz' feathery, classically-influenced approach and the distinctly grooving rhythms of bassist Thomas Lahns and drummer Michael Arbenz.

Duke Ellington's rarely performed ballad "Reflections in D" —dedicated to the late Paul Bley—sat snugly with an arrangement of a Swiss folk tune. Gradually yet surely—like a cleverly spun plot—VEIN Trio seduced as the dynamic range of the music increased, with Florian Arbenz digging deeper to match the intensity of brother Michael's consistently energetic stick-work. Almost imperceptibly, the music swelled from the etude-like elegance of the concert's beginning to grander, more visceral terrain of the pulsating finale. The encore served up a playful boppish number, sizzling and quirky, like Thelonious Monk at 78rpm.

That Liebman and Greg Osby have repeatedly collaborated with Vein Trio is a hefty endorsement, but the key to the trio's success lies not with its star guests but in its originality. Not only does this Swiss trio not evoke the Esbjorn Svensson Trio —a rare enough feat in European piano trios—but it sounds, resoundingly, like nobody but itself.

The Belfast Barge, moored on the River Lagon and just minutes from Belfast's commercial centre, became the latest venue to host a concert at Brilliant Corners. A maritime museum by day, it serves as a reminder—along with the iconic Harland and Wolf Cranes nearby—that in the not too distant past Belfast was the world's largest shipbuilding city. A few tables and chairs soon converted the 600-ton barge into a funky live venue for the debut of Cacao, a Belfast-based group specializing in Brazilian music.

Vocalist/guitarist Gnanam Samuel steered the quartet through a selection of classics from the vast Brazilian songbook, with Phil Smyth on electric bass adding vocal harmonies and trumpeter Linley Hamilton providing his trademark tasteful embellishment. Drummer Marty McClosky was much more than a solid time-keeper, animating the songs with the sort of rhythmic panache more usually associated with straight-ahead jazz.

Samuel's arrangements lent lustre and vitality to rather familiar fare such as "So Danca Samba," "Corcovado," "Aguas de Marzo," "The Girl from Ipanema" and "Mas Que Nada," with McClosky in particular given ample space to strut his stuff. Less familiar, though equally satisfying given the crowd's response, were Samuel and Smyth's original compositions and arrangements of tunes by Airto Moreira, Lionel Loueke and Gretchen Parlato. Ary Barroso's 1939 song "Aquarela do Brazil" concluded an enjoyable set in upbeat style. Melodic yet rhythmically charged, lyrical and virtuosic to boot, Cacao seems set to build a lasting local legacy.