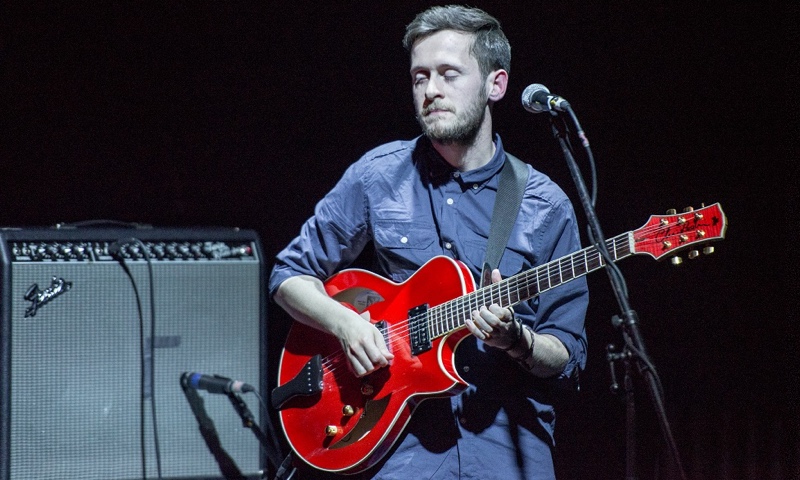 What will jazz be like in ten, twenty or fifty years from now? What will be the main influences on it? I think we're hearing the genesis of that in some of the music we're hearing in this festival. —Kenneth Killeen, Improvised Music Company

In an international calendar absolutely bulging with jazz festivals, 12 Points—conceived in Dublin by Improvised Music Company in 2007—stands out as one of the more original. It's not just the diversity and quality of the music that sets Twelve Points apart, after all, there's no shortage of festivals boasting great, eclectic programmes. Nor is it just the fact that 12 Points alternates between Dublin and other European cities, which is unusual in itself. Where 12 Points significantly differs from many other music festivals is it that backs largely unknown bands/artists from across Europe.

Whereas most festivals balk at the idea of risk, 12 Points entices the audience with the risk factor and in the process has developed audiences that come to the music with an open mind to be sure, but expecting innovation and originality. Helping develop the bands' careers and building audiences receptive to music that shies away from codified styles and easy categorization seem to be the twin engines driving the 12 Points juggernaut.

Following another successful jaunt to mainland Europe in Umea 2014, 12 Points 2015 returned to its spiritual home of Dublin, where it all began nine years ago. The four days at the Project Arts Centre served up an amazingly eclectic range of music on its main program and also showcased several of Ireland's most promising young jazz/improvised music outfits.

Recent editions have seen 12 Points expand its purview by gathering together music industry professionals, journalists, and academics to encourage meaningful exchanges and inspire new ideas to promote jazz/improvised music throughout Europe. 12 Points 2015 was no exception. But the real stars of the show were the musicians themselves and there was plenty of compelling, provocative and exciting music to digest.

It can be no easy task to open a festival but Strasbourg four-piece Auditive Connection rose to the occasion with a confident, visceral performance that was as engaging as it was unpredictable. Cellist Anil Eraslan and guitarist Gregory Dargent forged punchy unison riffs and coruscating individual lines over drummer Frédéric Guérin's muscular pop-rock rhythms and vocalist Jeanne Barbieri's idiosyncratic vocal stylings.

On the opener "Monsters" Auditive Connection's music gravitated between King Crimson-like grunge and leaner indie-rock, and although both elements raised their heads from time to time during the set the music was a constantly unfolding mystery. Barbieri's seemingly Latin-sounding liturgy gave way to her invented language vocalisations on "Tontra," a riff-heavy number that included light-hearted shouting, caterwauling and collective Monty Python-esque semaphore. The goalposts were moved again on the episodic "Tra La La" which moved eerily through the gears from neo-classical to psychedelic and noirish universes.

The trio of pianist Anja Lauvdal, bassist Fredrik Luhr Dietrichson and drummer Hans Hulbaekmo came together while studying at the Trondheim Conservatory of Music: "It's a very opening method of teaching," said Hulbaekmo before the gig, "you learn about playing from within, not about styles." Accordingly, there was something hermetic about Moskus' internal idiom, one that contained no overt references and which eschewed most typical piano trio conventions.

The swell gradually abated after half an hour and a pocket of silence invited hesitant applause. Immediately, the trio pounced on the applauders, sonically that is, and carried on with a lithe free-form improvisation that went from fairly dissonant and rhythmically fractured passages to the sort of flowing invention suggestive of Craig Taborn's trio with William Parker and Gerald Cleaver. A grooving bass ostinato redirected the trio, coaxing Lauvdal to her most melodic phrasing, while Hulbaekmo maintained a delightfully light touch. A processional closing passage, gently upbeat and hymnal, was the first sign of any pre-configured plan.

Many of today's piano trios boast an identifiable sound. Few, like Moskus, are prepared to improvise around sketches of ideas for such prolonged periods. Neither afraid to lock in to an extended riff or to let the music all but expire, Moskus found plenty of inspired moments between the two extremes.

Not to be confused with the 1970s New York jazz-funk band of the same name, Brussels five-piece STUFF takes its name from the Miles Davis track off the legendary trumpeter's album Miles in the Sky (Columbia, 1968). Any similarities between Davis and this Belgian quintet's music is less about style and more to do with an open approach to music that permits multiple influences to shape the group sound. If Miles in the Sky was a stepping stone for Davis on the transitional path from acoustic jazz to electric, rock-influenced music then what this gig highlighted was how quickly this young quintet has arrived at a strongly identifiable sound—and a potently infectious one at that.

Saxophonist Andrew Claes coaxed myriad textures from his EWI—from low-key punctuation to soaring exclamations—while Menno Steensels' turntables brought an urbane, club edge to the mix. Imagine a super-band—in a parallel universe naturally—that brought together Weather Report, Stevie Wonder, Depeche Mode and Giles Peterson and you may begin to get some idea of STUFF's sonic reach.

Unashamedly retro in some respects, yet with a handle on more contemporary rhythms, STUFF's grooving mash-up was enhanced by the obvious delight the musician displayed, as they seemed to dance with their instruments and the sunny collective vibe. It's easy to imagine STUFF appealing to the Snarky Puppy generation and perhaps enjoying the same international festival appeal. Whether the festivals will have the gumption to present this music in a danceable setting as opposed to the usual sterile theatre/concert hall environment remains to be seen.

The medium too, in some cases was also bizarrely retro. It's not known whether any of the record 500 bands/applicants for 12 Points 2015 sent vinyl, floppy discs and cassettes to the organisers but all formats, amazingly enough, were available on the merchandising stand representing the various bands.

As Improvised Music Company's Acting Director Kenneth Killeen explained, 12 Points is realized through an open call to the musicians, conservatories and networks throughout Europe. The incredible response—growing year upon year—highlights the huge number of creative young musicians in every corner of the continent. Some countries, like Norway, the UK, France and Italy, for example, may enjoy higher musical profiles than some other countries but the talent is everywhere.

Máté's frenetic approach to his keys, dissonant and wildly percussive, was matched by the intensity of Péter's thrumming bass and Szilveszter's thunderous attack. Intense, yes, but bass and drums held steady rhythmic courses that anchored the trio even in the headiest passages.

The most fascinating aspect of A.M.P. Trio's music lay not so much in the high peaks of its free improvisation—as passionately stormy and primal as anything Cecil Taylor could muster---but in the climbs up and down in between, where naturally, the pace and intensity undulated. The music was marked not only by a surreptitious progression but by constantly rotating dynamics whereby instruments slipped in and out of the dialog. Solo piano—subtly lyrical—unaccompanied arco explorations and strange, cymbal-teased drum skin sonorities lent splashes of contrasting colors to the vibrant canvas.

With rhythms so fractured and undulating one can only guess at what sort of sense of the passage of time the musicians had. As the trio's billowing steam gradually evaporated and the music slipped quietly into nothingness, two hands appeared around a curtain indicating that there were still ten minutes remaining. What possible encore would serve musicians—and audience alike—after such an impassioned performance? The answer was none, and the musicians exited for a slightly early cup of tea to enthusiastic applause.

Austrian-born Berliner Elias Stemeseder is perhaps best known for his ongoing collaboration with the Jim Black Trio but his recordings with Anna Webber's Percussive Mechanics are also worth checking out. Still in his mid-twenties, Stemeseder has also worked with the likes of Nels Cline, Greg Cohen and Petter Eldh, amongst others. Recently, however, Stemeseder has turned to solo piano and his performance at 12 Points 2015 represented the only unaccompanied turn.

In a captivating performance there was only fleeting reference to Stemeseder's classical training. Instead, the bulk of his play stemmed from the minimalist and prepared-piano traditions, with little pegs on the strings lending percussive bite to his mostly gentle modulations. A generally serene flow characterized Stemeseder's opening narrative, though a fairly constant left-hand pulse accompanied his melodic improvisations.

If a quietly elegiac tone had infused the twenty-minute opening meditation, the second part evoked industrial intensity, with Stemeseder's left fist pounding the lower keys with mechanical precision while his right hand teased the upper keys before flashing up and down the keyboard. Winding down the pistons, Stemeseder segued into a more overtly jazz-influenced, lyrical piece that owed a debt to Thelonious Monk and those who came before him. In the final stretch the pianist reasserted his own personality with intense rhythmic comping and dashing right-hand runs. The last segment, classically and blues informed, was as pretty as a gentle Chopin mazurka.

This was an impressive solo performance by a pianist we're sure to hear more of in the future.

It's no coincidence that there's been a Finnish band at every edition of 12 Points; there's tremendous strength in depth in the Finnish jazz scene, as demonstrated in the showcases at Jazz Finland 2014. Three-piece Virta is one of the latest young bands to suggest that there must be something in the Finnish water.