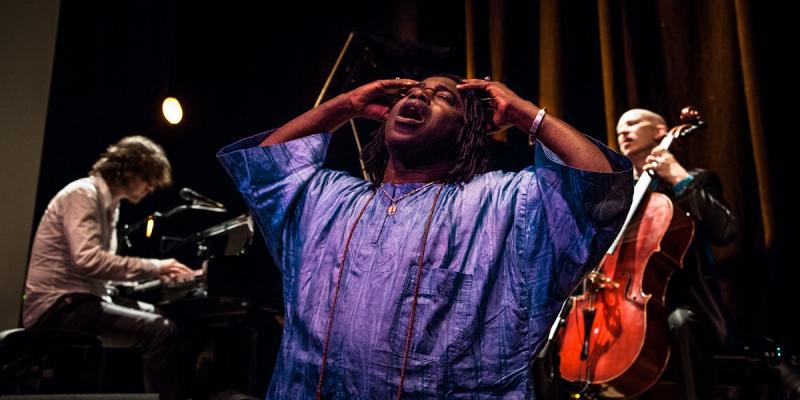 April Jazz is the latest addition to Dublin's thriving jazz/improvised music scene. The weekend festival is part of the National Concert Hall's Perspectives program, a series of monthly concerts that spans modern bluegrass and fiddle soundscapes, alt country and contemporary piano recitals. Even within the three-day April Jazz festival there was a little of something for everyone, reflecting the eclectic nature of music that falls under the unwieldy, multi-colored umbrella of jazz.

"It's all coming together these days, isn't it?" remarked violoncellist Ernst Reijseger rhetorically, prior to the opening concert, on the subject of vanishing musical borders. Certainly the trio of Reijeseger, pianist Harmen Fraanje and vocalist percussionist Mola Sylla fuse world, classical and jazz better than most, as demonstrated on Down Deep (Winter and Winter, 2013) and Count to Zen (Winter and Winter, 2014), two of the most beautiful collections of tunes in recent years.

The bulk of the trio's set came from its second CD. Sylla's infectious ostinatos on thumb piano ("Perhaps") and the four- stringed salam ("Bokou") formed the rhythmic pulses, with Reijseger and Frannje weaving independent, yet interconnected lines that waxed and waned. Sylla's husky blues-inflected tenor and percussive accents seduced with a story teller's craft. On "Badola" barking punctuated his plaintive narrative, bird calls were conjured on the haunting ballad "Faleme," while shamanistic chanting colored "Headstream."

Reisjeger drew his own percussive colors from the violincello's body, wetting his finger and drawing cuica cries, or rapping the body in a cajon-like duet with Sylla. Little pegs altered the strings' tonality in one of the more abstract passages while his slap technique bristled with funk energy. Both Reisjeger and Sylla exhibited breathtaking virtuosity throughout the eighty-minute set, yet this was, above all, a most lyrical trio dialog.

The hushed, neo-classical ambiance of "Friuli," with Syllas' whispered vocals adding a ghostly vein to Reijeseger and Fraanje's close-knit lyricism closed the set. The inevitable encores served up the achingly pretty "m'br," built on a Phillip Glass-esque piano motif and swirling arco lines, followed by a danceable West African anthem. It was a suitably stirring finale to an uplifting concert where folkloric, classical, jazz and experimental elements meshed beautifully as one.

On the face of it, vocalist Sue Rynhart's music was a million miles away from Reijseger, Fraanje & Sylla's hybrid musical language. Yet, her intimate duets with double bassist Dan Bodwell likewise drew from disparate roots of jazz, classical, Irish folk, and art-pop.

Against the starry-curtained backdrop of the main stage of the National Concert Hall, Rynhart and Bodwell interpreted faithfully, and with plenty of passion, the songs from Rynhart's striking debut CD Crossings (Self Produced, 2014). However, it was with a new song, "Be Content" that the duo kicked off; Bodwell's grooving bass and Rynhart's uniquely dark-hued yet breezy delivery set the tone for a short, yet captivating set.

Fog-horn arco buoyed Ryhnart's lilting delivery on the sombre poetry of "Wine Dark Sea." On "Wait and See," "She Has Music" and "When You Get Home" the music veered between ethereal folk and gothic pop. Another new tune, "Foxed," ventured into the folk-rock of Sandy Denny-era Fairport Convention, though Rynhart's improvisational flair sets her apart from that tradition. Another burning Bodwell groove introduced "Somewhere to Go," a quirky Rynhart tune that quickly burrowed its way into the sub-conscious.

It's conceivable that Rynhart could add instrumentation to her musical palette but the bare bones pairing of voice and double bass suits Rynhart's poetic vignettes. Sheila Jordan, who practically invented the voice and double bass setting, has refined the art for over fifty years; Rynhart and Bodwell could well do the same with their very personal idiom.

Any Tomasz Stanko concert is something of a special occasion. The seventy-two-year-old Polish trumpeter is often referred to as a doyen of European jazz, or some such term, but such geographical definitions ignore his importance on the world stage for over five decades. It was also a rare chance to see Stanko's much vaunted early/mid 2000s quartet, restricted to just occasional performances since the trumpeter formed his New York Quartet at the end of the last decade.

Marcin Wasilewski, Slawomir Kurkiewicz and Michal Miskiewicz have of course flourished prior to and post-Stanko on their own terms but there was always a little magic in this Stanko quartet and from the opening notes of the grooving "Little Thing Jesus," with all four musicians stretching out, it was as if the quartet had never been apart.

The set balanced blue-toned balladry and fiery bop- inspired numbers that covered a fairly expansive arc of Stanko's long career. Stanko remains the ultimate balladeer and scintillating slower numbers peppered the set. Stanko exuded melancholic lyricism on the all too brief "Pearl" and noirish reverie on "Celina" and "Song for Sarah." Greater warmth infused an uplifting rendition of the lovely "Sweet Thing," one of the only tracks from the quartet's three CDs.

Hypnotic at slow tempos, the quartet's heightened interplay was at its most compelling at mid-tempo strolls—such as with the swinging "Elegant Piece"—and on livelier fare. Kurkiewicz and Miskiewicz's incendiary rhythms inspired Wasilewski and Stanko to some thrilling improvisations on "Bosonossa," the bop-fuelled "Gonja" and the bluesy fire of "Celina."

Stanko's quartet was given a standing ovation, returning for a brief encore with a smouldering version of Krzysztof Komeda's "Sleep Safe and Warm." It's a tune Stanko's sidemen recorded on their trio debut, Komeda (GOVI, 1995) and Stanko himself on Litania: Music of Krzysztof Komeda (ECM, 1997), underlining the common DNA that lies at the root of this exceptional quartet.

Beyond the three CDs they recorded together Stanko clearly feels he can delve into his back catalogue with this highly flexible quartet. It's tempting to think they might still return to the studio, nine years after Lontano (ECM, 2006), because it feels like they still have a lot to say to each other.

The pairing of Belfast's first Music Laureate, composer Brian Irvine with improvising vocalist Jennifer Walshe on 13 Vices got day two of April Jazz off to a riotous, madly entertaining start. The music for string players and improvising musicians was loosely inspired by Mihail Chemiakin's slightly grotesque sculptures in Moscow, each of which represents a particular adult vice that is damaging to children.

The vices that Chemiakin based his thirteen figures on include alcoholism, prostitution, theft, ignorance, war propaganda, child labour, irresponsible science, indifference and poverty. Irvine and Walshe—though touching on some of Chemiakin's themes— were more concerned with vice in general. As intense as the seventy- five-minute performance was, there was plenty of hilarious satire and dark comedy from the hugely impressive Walshe, who barely drew breath during an exhilarating performance.

Visceral and abstract, ear-splitting, serene and melodic in turn, Walshe was at the epicentre of the sonic storm as it swelled and diminished. Her tireless improvised meditations on indifference and ignorance, jealousy, beauty/vanity, the manipulation of information/propaganda, fidelity, and sexual abuse/harassment were darkly humorous; the Virgin Mary, Norwegian pop group A-ha, Molly Malone and a brilliant caricature of a drunk on a bus were all press- ganged into the act. "The Fields of Athenry," the classic Irish song of love, oppression and rebellion—and the Irish rugby terrace anthem—will never sound the same again.

Artists like Irvine and Walshe almost never get invited to perform the national anthem before big sports events but life would be far more entertaining if they were allowed a little carte blanche. Energetic and energizing, the musically adventurous, tempestuous fiesta that was 13 Vices proved that entertainment and intellectual stimulation are not incompatible. Sometimes they go hand in hand in wholly unexpected guises.

It's not every day that someone pulls a chalumeau—the baroque precursor of the clarinet—out of their pocket, but Sean Mac Erlaine is no run-of-the-mill musician. The multi- woodwind instrumentalist straddles jazz, folk and free improvisation and is a member of This is How We Fly, which fuses Irish, Swedish and American folk traditions.

His own recordings as leader, Long after the Music is Gone (Ergodos Records, 2012)—haunting meditations inspired by the Irish landscape—and A Slender Song (Ergodos Records, 2014)—a collection of live reed/electronic improvisations—provided the rough blueprint for his quietly captivating thirty-minute set.

On chalumeau and then clarinet Mac Erlaine improvised spare narratives that were ethereal, ghostly and essentially lyrical. Electronic processing created depth of sound and dreamy echo effects. Mac Erlaine drew faintly from Irish traditional language on the original numbers "Kilkenny Dig Out" and "A Curl in The Bonnet," and switching to bass clarinet for the final exploration, used short vocalisations as sounding boards for subtle harmonic improvisations.

The real trick would have been to conjure the bass clarinet from his pocket, but there was still a little magic in Mac Erlaine's unique sound world.

With Ireland gearing up for the centenary celebrations commemorating the 1916 Rising, the Anouar Brahem Quartet's performance marked a rising of more recent vintage. Souvenance (ECM, 2015), the Tunisian oudist's first recording since The Astounding Eyes of Rita (ECM, 2009) was inspired by the so- called Jasmine Revolution of 2010, and his quartet's recital was largely faithful to the soft contours of the recording.

The absence of the Orchestra della Svizzera Italiana—the 18-piece string ensemble that graces the CD—may have stripped the music of its gentle orchestral ambiance, but instead put in relief the intimacy of the quartet dialog. Pianist Francois Couturier's repetitive piano motifs and bassist Bjorn Meyer's occasionally striking ostinatos created rhythmic ripples in an otherwise serene suite.

Brahem and Couturier were often closely intertwined, like the billowing smoke and dust of the striking—and atypical—cover of the ECM CD. Klaus Gesing on bass clarinet was, for the most part a subtle presence, whose deft interventions were more felt than heard. Improvised and composed lines in this extended tone poem were hazy and it wasn't until the seventy five-minute mark that Couturier unleashed the first unequivocal solo that followed no obvious script.

There was no doubting the poetry of Brahem's music or the hushed intensity of the quartet's delivery but with Souvenance's unfolding dramaturgy built on very subtle shifts in dynamics the emotional impact was equally subtle, and in short, the ninety minutes seemed long. Perhaps in fairness, the narcotic effect of the music was down to the jarring contrast of the highly visceral, adrenaline-fuelled performance of Thirteen Vices that had preceded it. The instant, enthusiastic standing ovation that greeted the musicians was undoubtedly the most fitting comment on Brahem's music.