By IAN PATTERSON
February 22, 2015
Sign in to view read count 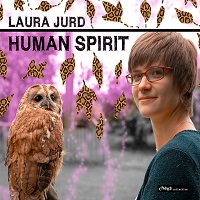 With her debut as leader, Landing Ground (Chaos Collective, 2012), Laura Jurd laid down her marker as a precociously talented composer and musician. Folk, classical and jazz threads united the Ligeti String Quartet with improvising musicians to create a powerful octet that was greater than the sum of its parts. On Human Spirit (Chaos Collective, 2015) Jurd eschews strings, piano and bass in favor of brass, electric guitar and vocals and the resulting music is rawer and punchier. Stylistically too, the music is more streamlined, sounding more like a band than a sophisticated musical experiment.

"Opening Sequence" conveys the septet's essential elements in a vibrant entrée but feels strangely truncated at under two minutes. Still, Jurd is chock full of ideas, of which varying the length of these compositions is just one way of keeping things fresh. The jauntily idiosyncratic and unpredictable "She Knew Him" simmers, glides, burns and rumbles, with Jurd's solo one of a half a dozen of her searching interventions that pepper the set. The melodically appealing "Brighter Days" is similarly episodic; vocal and trumpet harmonies convey hymnal lyricism while Roth's Black Sabbath-esque grunge underpins comically spooky muted trumpet and trombone.

The dreamy miniature "Prelude" sets the scene for the cheerily hypnotic "Pirates" whose infectious guitar and brass-heavy grooves situate it somewhere in the seas between West Africa and New Orleans. Roth's strings burn briefly before an irresistible vocal-cum-handclap chorus drops anchor. Jurd deftly steers the septet between melodically soothing terrain and punchier contours on "Blinded," a darkly poetic love tale punctuated by O'Hara's purring-growling trombone. "Human Spirit" bristles with the fractured energies of mid-1970s King Crimson, with Kinsella foregrounded over Dick's industry and riffing support from brass and guitar.

Classical and folk influences combine on "More Than Just a Fairy Tale," which leaps from the tuneful to searing ensemble improvisation in a heartbeat. Kinsella and trumpets meld beautifully on the epic "Closing Sequence," a high-octane concert closer if ever there was; pulsing guitar, trombone and bass saxophone and rattling drums form the backdrop to Kinsella's pure-toned vocals and Jurd's contrastingly fierce trumpet lines.

Surrounded by like-minded musicians, Jurd's unconventional idiom spurns cliché and convention in favor of sonic adventure. Yet Jurd embraces melody, harmony and groove as much as she provokes with blasts of dissonance and gutsy angularity. It's the combination of sweet and grinding, soothing and fiery that makes for such compelling listening.