By BRUCE LINDSAY
November 15, 2012
Sign in to view read count 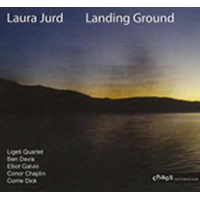 Laura Jurd calls her debut Landing Ground, but it's the references to flight and cross-Atlantic antics in her song titles that seem a more appropriate reflection of the young composer/trumpeter's musical vision. Still a student at London's Trinity College Of Music and just 21 at the time of its recording, Jurd has already won major awards including the Dankworth Jazz Composition Award and the Worshipful Company Of Musicians' Young Jazz Musician Of The Year 2012. She's also the cofounder of the Chaos Collective alongside pianist Elliot Galvin and drummer Corrie Dick, and a regular performer across the UK.

On Landing Ground, Jurd reflects on themes of movement, travel, journeys across long distances and between states of mind. Her compositions bear the influence of European classical music and folk traditions, drawing them together with touches of jazz and improvisation to create a set of tunes which are then performed beautifully by an ensemble of jazz musicians and members of the Ligeti Quartet.

Jurd's six compositions are interspersed with three brief improvised duets-one each between Jurd and one of her musical partners. However, it's the longer tunes that are the real showcases for Jurd's inspired, and inspirational writing. The tunes reveal the breadth of her imagination, her precocious talent and her refreshing lack of pretension. There is humor, romance, cinematic ambition and musical flair in abundance.

"Flight Music" opens with Jurd's sparkling trumpet phrase, and soon widens its musical scope to bring every one of the players to the fore. The tune serves to establish one of Landing Ground's key characteristics: the complete integration of jazz band and string quartet into a single octet. "Happy Sad Song" epitomizes this integration: a beautiful, melancholy, tune on which every member of the octet is crucial to the mood and texture. "The Lady Of Bruntal" combines the Iberian atmosphere of "Flight Music" with an East European sensibility-as befits a tune dedicated to Czech musician Iva Bittova-while the urgency of "Landing Ground" contrasts with the sad beauty of "Tales From The Old Country." "The Cross-Atlantic Antics Of Madame Souza" highlights Jurd's humor and ingenuity as it leaps and darts from crazed sideshow music to Broadway bombast and scattergun free jazz interplay. It's fun, from start to finish.

The improvisations provide an interesting contrast to the six composed pieces. "Duet I," between Jurd and cellist Benjy Davis, is a relatively languid affair. On "Duet II," pianist Galvin punches out a tough left-hand rhythm as Jurd stutters and stabs her equally emphatic notes over top. The third improvisation matches trumpet and percussion in a quick, energetic, and immediately engaging exchange between Jurd and Dick.

Ambition is an admirable quality, but it's rarely matched by the talent required to achieve it. Jurd is certainly ambitious and definitely talented, with Landing Ground signaling the arrival of a musician and composer of terrific potential.